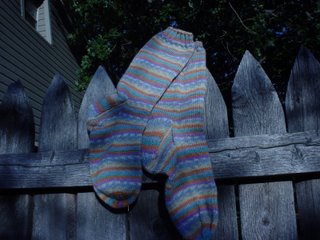 I finished a pair of socks Saturday, Online Supersocke 100 colorway Fun, pitiful dark picture above. Plain old stockinette. They were my Ardmore Roadkill Ralley socks, to be knit in the car while talking. I cast on for another pair yesterday. This time it will be Dancing, from Knitpicks, in a pink and purple colorway. The socks will be cables, on 64 stitches. I'm hoping my skill with cables will improve, and my speed. Two shawls on the needles - the Kimono Shawl from Folk Shawls, and the Triangles within Triangles Shawl from Heartstrings. Neither one is exactly burning up the needles. It's just too hot.
Posted by Cinderellen at 8:33 AM