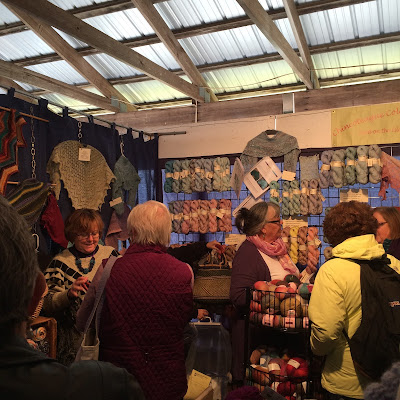 After years of planning (and even more years of wishing) I finally got to go to the New York State Sheep and Wool Festival, usually referred to by knitters as "Rhinebeck" because the Dutchess County Fairgrounds that hosts the festival is in Rhinebeck New York. I generally describe it to non-knitters as Woodstock for Knitters, which makes people think it must be really niche, but their average attendance over the two day run is 30,000 people, mainly women, and mainly knitters and crocheters. The festival features all sorts of fiber animals, from llamas to angora rabbits, and every use of fiber animals from lace shawls to lamb sausages. It doesn't hurt a bit that the festival takes place in the stunning Hudson River Valley where fall color is peaking and the weather is generally crisp and cool. There was actually a bit of snow there during the weekend.


The raw numbers of attendees are impressive of course, but Rhinebeck's importance in knit culture is not just in the numbers. I don't think the importance of this and other regional festivals in the rising interest in single breed yarns can be overstated. The concentration of enthusiasts makes it possible for farms specializing in rare breeds, organic dyes, natural colored fibers, and other specialty products to find a ready market for their wares. Local farms sell raw fleeces, and yarns that may be spun and processed at the farm or at small regional mills. There are mule spun yarns, something that a very few mills can produce, and handspun yarns, yarns dyed in seawater or unusual fiber combinations. These are not yarns produced in commercial quantities. Some are otherwise available only online, or at one or two local yarn shops. Some of the hand dyed yarns really require selection in person as the variation from skein to skein is substantial. Without the regional festivals no one would know enough about the products to seek them out. Vendors of fiber tools find a ready market there as well. Buttons, spinning tools and processing tools are sold there. There are also classes, book signings; sheep dog and shearing demonstrations draw crowds. Vendors of buttons and project bags who generally sell mainly on Etsy have the opportunity to get their wares in front of a large group of buyers who will be able to order with confidence online after getting a hands on introduction to the products. Some yarn stores had booths. Although the stores were selling some commercially made yarns there was a big demand for their products too - not every yarn is sold at every store and this is a great opportunity to take advantage of a selection of yarns and tools not available in your area. This year there were over 260 vendors. The fact that sales were brisk can be judged by the fact that there were long lines at nearly every booth all day.

The best part for the attendees is enjoying a weekend of knit culture. There is the tradition of the "Rhinebeck Sweater" - a garment knit to debut at the festival. Because patterns go in and out of style there is usually a particular sweater that appears in many iterations and versions in any given year. There are also many one of a kind sweaters to enjoy. Knitters stop each other to compliment the wearers' lovely garments and accessories, discuss the quality and oddities of the patterns and yarn used, and make friends. I noticed a large number of shawls on display, many more than there were scarves. Cables and other textured stitches adorned many hats. There are some hats whose patterns will soon be in my library based on how great they looked "on the hoof". Knitters of all ages interact as equals over the shared obsession that will bring thousands to a fiber festival. Many make it a girls' weekend and share hotel rooms for a weekend yarn party.

I've wanted to go for years. I had not lived near enough before to make the trip feasible (although I visited with a knitter from the UK in the coffee line!), but as soon as I started planning to move to the East Coast it became a possibility to consider. A local friend and I made plans a bit over a year ago to make it happen. I did not want to try staying in the area for my first trip (hotel costs are huge), but several local yarn stores in the region sponsor bus day trips and that's what we chose to do. We took the bus from Webs, a wonderful yarn store in western Massachusetts. We drove in the day before, shopped at Webs, and down the street at Northampton Wools, a lovely shop just down the street from our chosen lunch spot. We stayed the night a few blocks away and the next day we were on the bus at 7:00 am & on the road to Rhinebeck.

Wanda and I had separately pored over the vendor list, visited the vendor websites, and made our list of booths to visit. Our lists were oddly similar, so we shopped in roughly the same buildings most of the time, although we did not make the same purchases. We were both mainly interested in  purchasing yarns from smaller farms and spinneries that are not widely available, and investigating commercial yarns that are not sold in our area. Once you have seen and felt a brand of yarn you have a better idea what to expect if you order on line. My purchases mostly reflected what I had intended for the weekend, including some for gifts and a sweater vest I promised to knit for Shana. Good thing I had a budget and a plan firmly in mind! I've been buying very little yarn for more than a year with an eye to buying something special at Rhinebeck.


The number of booths and yarns was a bit overwhelming for a first time visitor, and Sunday I spent hours looking over pictures posted by others who attended. While the fairgrounds is not large, the booths are numerous and filled with loads of diverse products. Going back to others' pictures reinforces what I saw and extended the experience. I'll be going back to some of the pictures again for sure. My initial review - well worth the trip. We had a blast!
Posted by Cinderellen at 9:56 AM 2 comments: