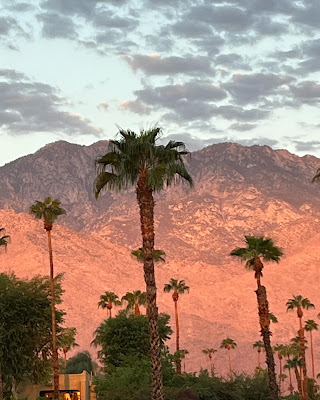 We moved to California a few years ago. This still seems like an unlikely sentence, but we actually picked up sticks and moved from Cape Cod, in the extreme eastern edge of the continent to southern California. We discussed it just before Thanksgiving, and left Massachusetts the first week of February.  Including selling a house. Then we moved over the mountains to Palm Springs. We went from the beach to the desert in two hops. Maybe not quite a hop. The picture above is my morning view when I step off of my porch. It looks different every day, depending on the light and the weather. One big plus is that it protects us from the winds and sand that come across the area from the San Gorgonio Pass. One's first clue if that the pass is full of windmills! That wind hits the desert and the blowing sand closes roads and slips into every crevice of every house. I love Palm Springs, but the jury is still out on the desert. So far it looks pretty bare and uninteresting to me but maybe this year some hiking to get a better look. Lots of tourists go hiking here unprepared. I see the rescue helicopters heading up to the Ramp every day all summer. I may fall, but I won't go up there in summer in flip flops, tank tops and no water in the dead of summer, with regular highs over 110.

We shipped one car, drove the other, and made a pilgrimage across the country, visiting family and friends on the way with our Mitzi crying and griping the whole way. She wanted to hang out of the window.  I actually knew someone who had seen a dog fall out of a car window on the highway. (hello Harold Price) no way. It was something of a bucket list experience for me, and something I may never do again.

In the past few years I have fallen in and out of love with Twitter. Elon is the last straw. I miss it so much for breaking news and political analysis/gossip/perspective, but maybe it's best to leave before the party is over. I miss the cleverness  and humor of it, and the ease of hopping on in a free minute to see what's up and the fun of live tweeting TV programs with others watching. I heard an interesting take this morning: that people will return to their neglected blogs or start new ones. I am coming back to it, although the interface has changed a bit and it will surely be ugly (more ugly then usual) until i get comfortable again. I'll have to check all of my links because I know for a fact some are defunct, my apologies in the meantime.

Posted by Cinderellen at 5:39 PM No comments:

Are We the Hostages? 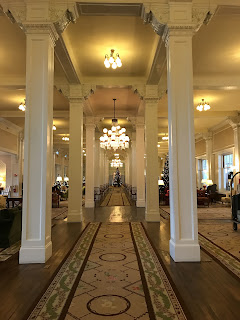 As a middle aged person (I might mention that The Little Woman says I am too old to call myself middle aged) I have watched and read a lot of news in my life. I’ve seen a lot said and written about working people. One quality that seems to be much prized is a “work ethic”. I’ve admired and appreciated this quality myself, even as a business owner I prized this quality. As a business owner I loved this quality, especially in someone who valued his work and his employer’s regard above all things as evidenced by showing up on time no matter what the weather and never putting his social or entertainment interests above his job. I loved people who took such pride in their work that they needed little encouragement, not even a living wage. This job was not vital to the health and welfare of the public, did not provide important services to hospitals, the armed forces, or the saving of souls.

These days I am reexamining this position. A work ethic is an important thing. It boosts pride in the worker, and encourages a team spirit among team members that makes workers want to perform with little input from management. My question these days is: how does this WE compare to Stockholm Syndrome? Absent the physical captivity feature, it’s pretty similar. Payment for most workers is inadequate, and even then begrudged by business owners. Complaining, organizing and demonstrating is firmly discouraged, enforced by lower management who is also under compensated.  Right to Work legislation codifies this control. Tax “reform” legislation emphasizes the same “trickle down” effect that we already know does not trickle down. We see how it works, why are we allowing it? Why are labor unions not forming and growing? Why are people not taking their work ethic and putting it to work on their gardens and homes instead of making it possible for corporations to employ fewer and fewer people at lower and lower wages?

This state of affairs is unsustainable. As automation takes over more and more jobs, more people must drop out of the workforce. Should they literally starve? Will we move to a guaranteed income? What will happen? This is coming, no mistake. Can we continue to attack social programs including Social Security and not build a rebellion from the bottom?
The photo it from the lobby of the Mount Washington Hotel in Breton Woods New Hampshire. of course in the modern manner it is now the Omni Mount Washington Hotel, reflecting the new way of frankly and publicly announcing that the ownership matters more than the thing itself. I do recommend the hotel itself.  We went for a few Thanksgiving weekends when we lived on the coast. It's a splurge, but a memorable place.  The lobby alone is a beauty in itself.
Posted by Cinderellen at 4:21 PM No comments:

The Little Woman and I vacationed in Southwest Florida every summer for about 20 years. Marco Island was our paradise. Usually we flew into Fort Myers, which at that time was an adorable little airport, and our preferred start to our trip. Occasionally we had to come in via Miami, driving across the Tamiami Trail.  I can say with confidence that I don’t recommend it at night. Any time we passed that way in daylight we stopped at the Miccosukee Restaurant, which was either the best or the worst restaurant in ever, depending on the trip. For sure it was the only one for miles in any direction. The last time we passed through I enjoyed my stop so much I picked up my favorite mug. I hear these days they have a nice travel plaza which seems to be thriving. I’m glad to hear they are doing well, and think of them every time I pick up my mug, picture to appear in a second post because Blogger.

Posted by Cinderellen at 2:25 PM No comments: