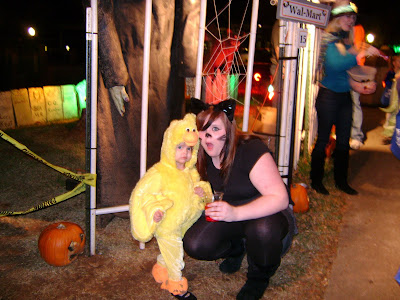 Rather than trudge from house to house in the dark Samantha and I took Vivian to the annual Haunt the Zoo event at the Oklahoma City Zoo. I had never been to the event before and it was a winner. Various local companies sponsor displays and hand out candy on a loop through the zoo. You don't get to see much in the way of animals because the zoo is dark and you have to stay on prescribed route, but the silhouettes of three lions looking over the crowd from their enclosure were memorable. We were fortunate enough to have perfect weather, and approximately a bazillion people turned out to enjoy the evening. Samantha and I both felt like we got our exercise for the day, with a long walk through the zoo passing Vivian back and forth between us. She didn't like to walk too much because of the crowd.
Posted by Cinderellen at 11:09 PM 1 comment: 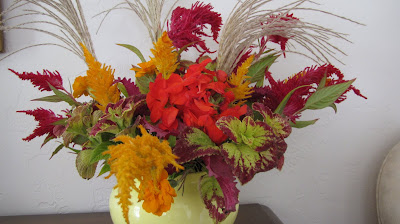 Last night I faced facts and brought my tropical plants in from the patio to winter in the garage. It gave me something nice to do while I waited for the Evil Wild Dog of the Prairie to come back from her midnight escape. I may have been a little early, as the near freezing temperatures I was expecting did not materialize, but it's been obvious for a while that the cool nights are not agreeing with the tropicals. They've stopped growing and have been just squatting out there giving me the Evil Eye. It feels like an odd exercise this year because if all goes as I hope I will not have a place for them next summer. Someone else will have the pleasure of my Little Shop of Horrors sized aloe vera and the big tub o' gerbera daisies. I'll bring Shana's kitchen herbs in today - I think the light in the garage is good enough to keep them going for the winter. I cut a nice bouquet from the annuals still going strong in the front yard; they make a pretty display and I may as well enjoy them a little longer.
Posted by Cinderellen at 12:29 PM 1 comment: 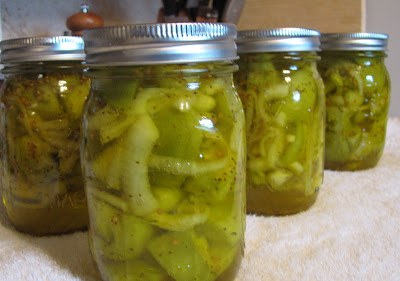 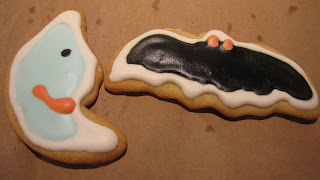 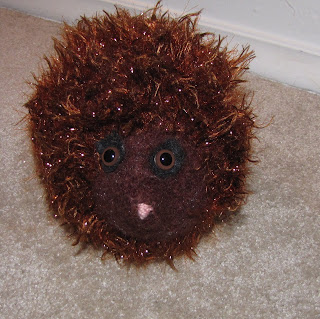 I was not moved to cook personally, although I did have a hand in decorating the cookies. I made
a felted crochet hedgehog which I'd been thinking about for a while, but I don't know that it is gift worthy. I had intended it as a present for one of the children on my gift list, but we'll see. Although it is kind of cute, it resembles nothing so much as a hairy football with eyes. I suppose that's why in the pattern book it was only shown head on or peeping out of a basket full of other cute toys. It didn't take me long to make it, or much in the way of purchased materials, but it was not so much fun to crochet with the fun fur and wool held together. I had to have a lot of light and even then missed stitches like crazy. I have some little amigurumi in mind which are less ambiguous in appearance and I may just stick with them for prezzies. I'll have a pair of socks finished this afternoon and maybe a little critter if I can pry myself away from gawking at other people's projects online.
Posted by Cinderellen at 3:31 PM 2 comments:

The Cutest Thing in Tulsa 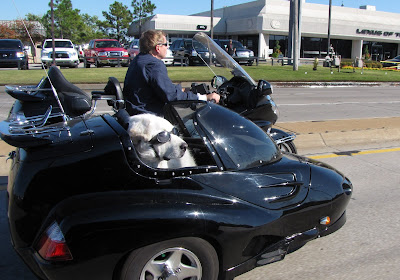 I spent most of the day Sunday in Tulsa visiting a variety of restaurants. I can safely recommend a couple, but the highlight of the day was seeing a dog wearing goggles riding in a sidecar. If only The Amazing Roxanne were a candidate for this adventure, but we all know she would run off screaming.
Posted by Cinderellen at 7:40 PM No comments: 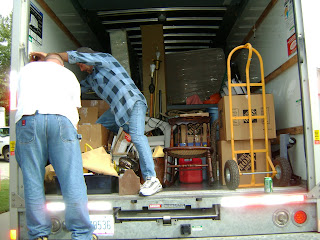 Not my own moving day, I'm happy to say. Nancy's house is finally sold, so it's time to empty the house and take the contents to Texas. Nancy and Larry have been down there for a while in temporary digs, leaving the bulk of their belongings in the house in Oklahoma City. Matt drove up with her to empty the house. There was a lot to do. I wrapped pictures in bubble wrap for the trip, and did a little packing. The guys got everything in the truck. Nancy made final decisions about what was going and which things would be donations. Matt, James and Jeremy provided most of the muscle, with Alex pitching in for a while too. We all had our pick 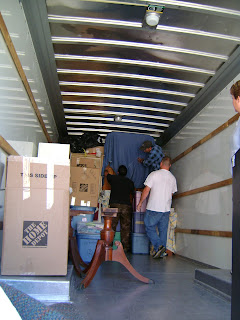 of the donations before the truck came. I picked up a (ceramic) chicken and a pretty basket for my knitting. It was hard work, but a good day for all except maybe Matt, who with every item loaded up into the truck imagined himself unloading it.
Nancy will be back in a couple of weeks to clear out the few remaining things. It should only amount a a couple of boxes. Then the house will get a quick clean up and it's done. The move has been a hard one for Nancy but everything is falling into place now.
Posted by Cinderellen at 4:59 PM No comments:

We were lucky enough to have a Visit from Miss Vivian today, so I tried uploading a video. Enjoy!
Posted by Cinderellen at 7:18 PM No comments: 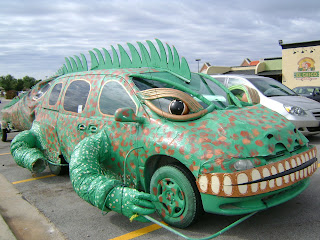 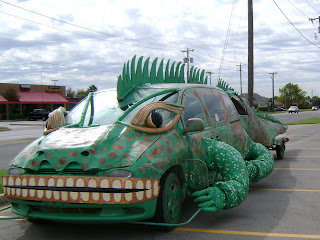 hanging around asking questions, so I never did hear who the artist was or why he bought it. There are little stickers on the windows which I thought would say "do not touch", but instead they said "invite someone to church today", so I think the owner was there taking advantage of the attention his car gets to pass along this message. I had to run along because Shana was waiting for me, but not before I got my pictures!
Posted by Cinderellen at 6:36 PM No comments: