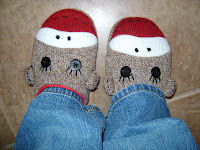 I think I won! I scored Sock Monkey Slippers, which I had seen and wanted, but could not justify as a necessity. I was also lucky enough to receive four skeins of Bamboo Spun yarn in Sea Blue, a cute casual beaded handbag with a wood handle, some great kitchen toys and a nice bottle of wine (with wine charms!), and a new sweatshirt in OU colors to replace the one I have worn to death. There were candles and cookies, a teddy bear, and lots of hugs and laughs. I received the 2009 Pattern a Day calendar in case I run out of inspiration. 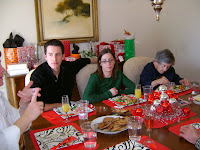 I got to visit with my in-laws, and then a pleasant dinner out with my children. A lovely day, in all. Shana and I opened our gifts early and then went straight to the kitchen to make our brunch. Just two days before we finally got our oven issue settled on the third service call so we had two available ovens. We'd planned out all kinds of strategies to make a single smallish oven do the job, but it was so much better to have two. We went with ham, grits casserole with cheese, rice salad and a green salad, so there was not a lot of last minute fussing that needed to be done. Since we had two ovens available I could make the turkey shaped bundt cake (we call it the Turkey Butt 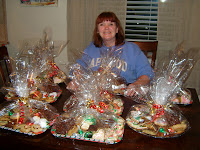 Cake) Christmas morning for maximum freshness. As it turned out no one had room or time for desert, so Shana and I will be enjoying the turkey butt cake ourselves. Luckily it freezes beautifully, so we can get the full benefit of the cake without compromising too much on our after Christmas fitness and diet goals. I am sending the remaining cookies out of the house before I eat every one of them myself. After brunch Shana, her dad, and I went out visiting. We had decided to use paper plates instead of washing dishes this year. It turned out to be the right decision. We used some really festive plates and lots of sparkle on the table. Although I love seeing our table set with china and crystal and my best linens, it sure was easier to keep things moving on a busy day when we did not have piles of hand washing to do afterward. 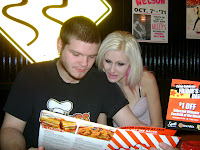 When we got back it was time for me to dash out for presents and dinner with Sam and Alex. We've been going out to eat at Christmas for a few years and it's something we have really enjoyed. Usually Dennis joins us but he was not able to this year; Samantha took a meal home for him instead. Vivian has figured out the charms of the camera and now although you might get the look of intense suspicion for the first shot, you get the giant "look at every one of my teeth" smile for all subsequent pictures. 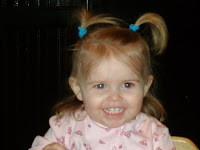 Shana and I are going shopping for presents for each other this weekend and have decided that instead of surprising each other it would be more fun go together to pick things to enhance our outdoor activities. I'm hoping to score some hiking pants. The Oklahoma climate is very warm, but I don't like hiking in shorts through cactus, rocks, and snakes! Jeans are so hot and take so long to dry that I am eager to upgrade to a more practical choice. Shana was planning to buy another dutch oven, but since her dad got her loads of cast iron campfire cookware she's undecided about what she'll be looking for.

Posted by Cinderellen at 1:54 PM No comments: 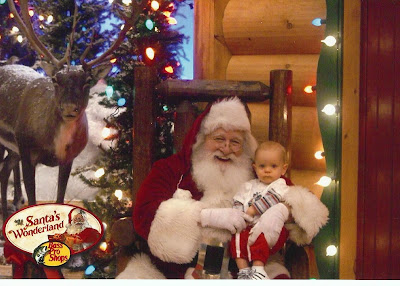 Logan had his first visit with Santa Claus this year. He looks really serious in this picture, but according to his mom, he was very happy to visit with Santa, but the efforts of Mom and Santa's Helper to make him look at them and smile made him very annoyed. He's just a Very Serious Boy. 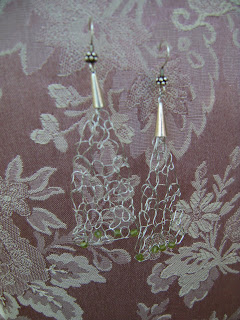 I am actually finished with everything now (and not a moment too soon). All I have to do is put my cookie trays together and bake the traditional Turkey Butt Cake for our Christmas brunch. Dinner with the kids and their dad had to be moved to Christmas evening because Alex has to work tonight (the joys of a retail job). Tomorrow will be a busy day. Friday I have hopes of a knit-in with one of my friends who has a yen to learn, and coffee later to the local Starbucks, or maybe The Red Cup, which has the advantage of being locally owned and next door to a very nice yarn store.


I made Shelley some sparkly knit earrings this year - no time to knit her a pair of socks, but maybe the next best thing? For about a minute I had the mad idea to knit a similar pair for Shana but I came to my senses. They are not exactly her style. I will definitely make myself a pair though. Not too hard once you figure it out, and very pretty.
Posted by Cinderellen at 12:13 PM 2 comments:

Gauge is a Big Fat Liar 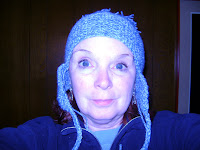 There's a rash of babies due at my office, and I don't have the stomach (or wrists) to craft up a blankie for every one of them. I do like to make a little something, and have a realistic idea of how often those adorable booties really get worn. This leaves hats as the obvious choice. They are cute, quick, and inexpensive to make. I looked at many a book, and decided upon Baby Beanies by Amanda Keeys as the ideal book for me. It has lots of easy and cute patterns sized from newborn to 2 years+. I had a request for a baby hat to be a Christmas gift. I had a type of cap in mind and after first choosing an unsuitable yarn and having to rip, I got started on what I thought might be the final version. The cutie in question is kind of a big baby, and based on his current weight I selected a size that should be suitable for a one year old. It seemed big. I checked my gauge. Twice. I proceeded to make a cap that fit Shana pretty well, and in fact would cover my own largish head although not in a flattering way. I proceeded to make another in the next smaller size, which I sent away before taking a picture, which is rather a shame because it ended up not resembling the pattern in any way but was pretty much the exact hat I was imagining. I do recommend this book, but be aware that Gauge is a Big Fat Liar. 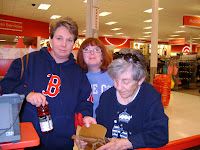 I know that garter stitch is stretchy, and that baby heads are disproportionately large, but this was just laughable.

Today was the day for Shana to take Aunt Rita out to do her Christmas shopping. This is something she's been doing for many years, and it's down to a very tight routine. It always happens on the last or next to last weekend before Christmas. There is a list of socks and underwear in various sizes and forms for everyone. If Rita gets me a gift she selects freely from candles, with occasional ventures into house shoes. Some years Nancy has time to help her make gifts, so less shopping is needed. Shana usually takes her to Target, and tries to get out early to avoid fighting with a crowd. I went along this time because I had one more gift item to pick up and I needed shoe polish and face soap (I lead a riveting life). I also wanted to memorialize the yearly occasion when Aunt Rita opens her wallet. It's something of a family joke that Rita has more money than anyone because she never spends any. It's actually about half true, and she has mastered the slow fumble and the "forgotten" wallet perfectly.

But I am sure not posting as often as I like. When I spent most of October slaving over the gorgeous but demanding Peacock Feathers Shawl I doomed myself to panic knitting for the very few handknits I had committed to. I was feeling OK about that, until it sunk in that I did have a handknit that needed to be in the mail in time to reach the recipient for Christmas. DUH. I lost track of the date and finished one item up at the last possible second & went straight out to the post office 20 minutes before closing. Now I'm down to one sock and one baby hat and I think it can be done. Maybe. I started the hat twice. The first time I was getting a wonky gauge AND my initial choice of yarn was turning out to be ugly and itchy. I think the second incarnation will be very cute. 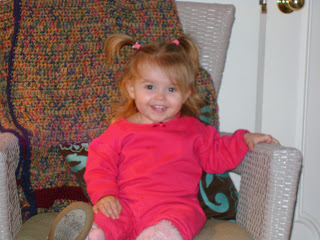 Even though I has down to the wire with my knitting I agreed to have Vivian spend the evening with me last Sunday. It was worth every minute of craziness to have her over to visit. I had the mad thought before I picked her up that I might be able to get in a few rows while she was here but of course that was not possible. She was running around getting into everything, and it quickly became obvious that if I whipped out the knitting she would be right there taking it apart. She was wearing little pink boots that she loved so much that I could not get her to take them off even to take a nap.


Baking starts today, although I probably won't be getting everything done today. I have only one small oven to work with - Oven Man (my hero) is coming Tuesday for the third visit to get the upper oven repaired. It won't help my cookie extravaganza, but we'll have two ovens in operation on Christmas Day, which makes out planning for our brunch much easier. Typical for this year of having all of our holiday out of whack, we don't even have our ham yet.
Posted by Cinderellen at 9:26 AM No comments:

And a View of Bournes Pond Road 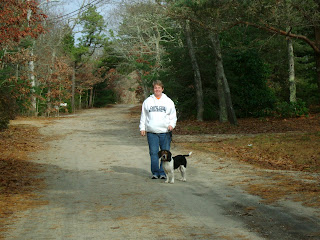 Bourne's Pond Road is one of my favorite roads. It's sand and not really paved, so it's full of ruts and gets loads of big puddles when it rains. It's narrow, and heavily wooded on both sides with very few street lights - a perfect road for a walk. In addition to the visual appeal, there is also the scent of pine and if you choose your time carefully you can hear the fog horn in Falmouth. Like most of my favorite walks, Bourne's Pond Road is also full of the memories of years and years of walks at all times of the year and in all weathers. The day I took this particular picture was the day Shana and I got married. The justice of the Peace was due in about an hour and we took a minute to get out for a relaxing little stroll. Then we went inside to dress up for the wedding while Lisa put the 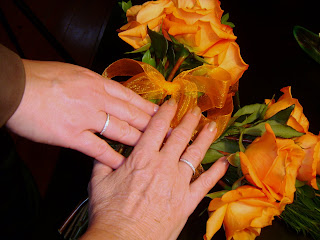 finishing touches on our cake.
The wedding was perfect. It was very simple and easy, just as we had hoped. Inace had everything arranged perfectly so it was (almost) effortless. A little champagne and sandwiches, a bite of cake, and it was off to our honeymoon weekend in Provincetown. We have loads of pictures over on the Flickr gallery of our whole trip.
Posted by Cinderellen at 9:28 PM 3 comments: