14 years ago, when we had just lost our beloved Great Dane Ezra's Sigmund Freud and we were not looking for another dog, Roxy sneaked into our hearts. My sister in law had found her loose on a major road and sent her to live with my ex-husband because while Lori tried to find her owner because Roxy was an escape artist and he had a better fence. After her owner was not found, and she was there looking at me every time I stopped by with our children Roxy ended up coming home with me. Our vet thought she was probably two years old.

She answered to Roxy, but we quickly dubbed her The Amazing Roxanne, Evil Wild Dog of the Prairie. She was a first class escape artist, not only running out of doors and pushing screens out of windows but also digging out from under fences and on one memorable occasion jumping off of a roof to run off. That trick ruptured her ACL, requiring surgery and a stint of rehab in our pool. The substantial bandage the surgery required did not keep her from digging out under the fence and running off on three legs. The knee healed well, but there was nothing to be done with the hip, and it bothered her in her later years whenever the weather changed. She went in and out through the neighbor's doggie door to eat her friend's food, crawled under another neighbor's garage door to eat the cat food June kept there to feed to local feral cats, and could run so fast no one could catch her to bring her home. 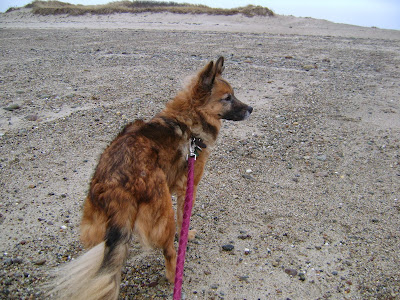 Luckily she was very food oriented. We could call her home from a great distance by rattling a jar of treats, and it was easy to teach her tricks with the right inducement. This interest in food also motivated her to jump up on the kitchen counter and eat anything going. After all - "it might be food - if not I'll just throw up". She tried pickles, lettuce, pecan pie (a big hit) and anything else she would get. She could also open cupboard doors and step on trash cans to get at whatever was inside. The bathroom trash can was her special disgusting favorite. 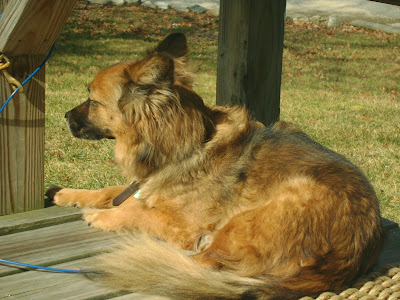 Although she was too small (about 20 pounds) to do major damage, she was resourceful. She managed to climb a book shelf to get and eat a pair of hearing aids. She was able to climb up between the wall and a dresser by bracing her back and feet against the opposing walls to gain access to the cat food we thought we had protected. She was very taken with some perfumes. I had received a box of Lush bath bombs as a treat, which she attacked and dragged around to roll in. Irish Spring was her favorite soap, which she loved take from my son's tub into the living room to roll around in. He had perennially hairy soap. She was a devoted huntress, plucking a blue jay out of the air, and capturing an opossum in the back yard. 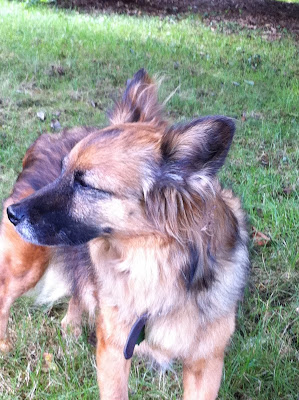 When we got her she was very bad on a leash. lunging, barking and pulling. Once we put her on a special harness to train her it turned out she had known all along how to behave, and was thereafter nearly perfect on leash. She was good with other dogs with very few exceptions, and was an easy travel companion. She liked cats, although this affection was not generally reciprocated. She was not worried by new people, and liked visitors, including repairmen. My father in law was one of her favorites. She demonstrated her love by racking him every time he came through our door. She loved my son, and demonstrated her love by biting his friend Jesse on the behind every morning because he came every day to take her boy away. (they walked to school together) 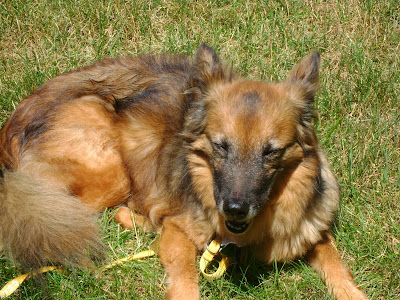 In her last years she seemed to be a tractable and agreeable dog, but still liked to indulge her hunting instincts. We have been bothered by little creatures burrowing under our shed. She thought it might be her life's work to get under there and catch whatever was hiding there. Although pretty much blind and deaf, she enjoyed ranging around the yard following her nose wherever an interesting scent could be found. She proved her worth chasing geese off my in-laws yard with gusto.

Last week the blood tests needed to get her teeth cleaned revealed that she was far advanced in kidney failure, and we had her put down yesterday. Her response to treatment was not adequate to justify keeping her with us any longer. We will love and miss her always, but we are at peace with our decision. She was a grand dog, our Baby Angel and Roxanne Roxannadana, and we were lucky to have her on our lives for so long.
Posted by Cinderellen at 10:38 AM 1 comment:

As promised, a little video tour of the garden. I'll apologize in advance for my terrible video skills. Maybe the next one will be better, but I doubt it.