Snowing again this morning, but one thing that can make a snowy morning a little more bearable is DANCING!

Posted by Cinderellen at 3:06 PM No comments: Here we are at the Vernal Equinox and like last year at this time it is still snowing. I have seen most of my birdbath and all of my trashcan emerging from the snow, so I do have hope, but my recycling bin though visible for the first time since late January is frozen into a drift and there is a pile of snow 5 feet tall in the middle of my veggie garden. Needless to say I have not yet planted my snap peas! What more is there to say about winter that I have not already said?

Still sticking with Weight Watchers Online. Results are as advertised, a bit over 2 lbs. per week. While the current incarnation of the program allows basically unlimited quantities of fruit and vegetables it can be a bit unsatisfying. Not so much in quantity, as plenty of high fiber foods take care of that, but I feel like my stomach is a little "cold": full but unsatisfied. I think that maybe when the weather is a bit warmer I won't miss some of my favorite comfort foods as much. A big salad with tuna is delicious in summer but less so in winter. I have put the weekly extra points to good use - a burger, a cup of clam chowder and a (tiny) lemon meringue tart, a patty melt sandwich. I must admit that however much you love them radishes are no substitute for tortilla chips, and I feel quite deeply the complete and total lack of cookies. 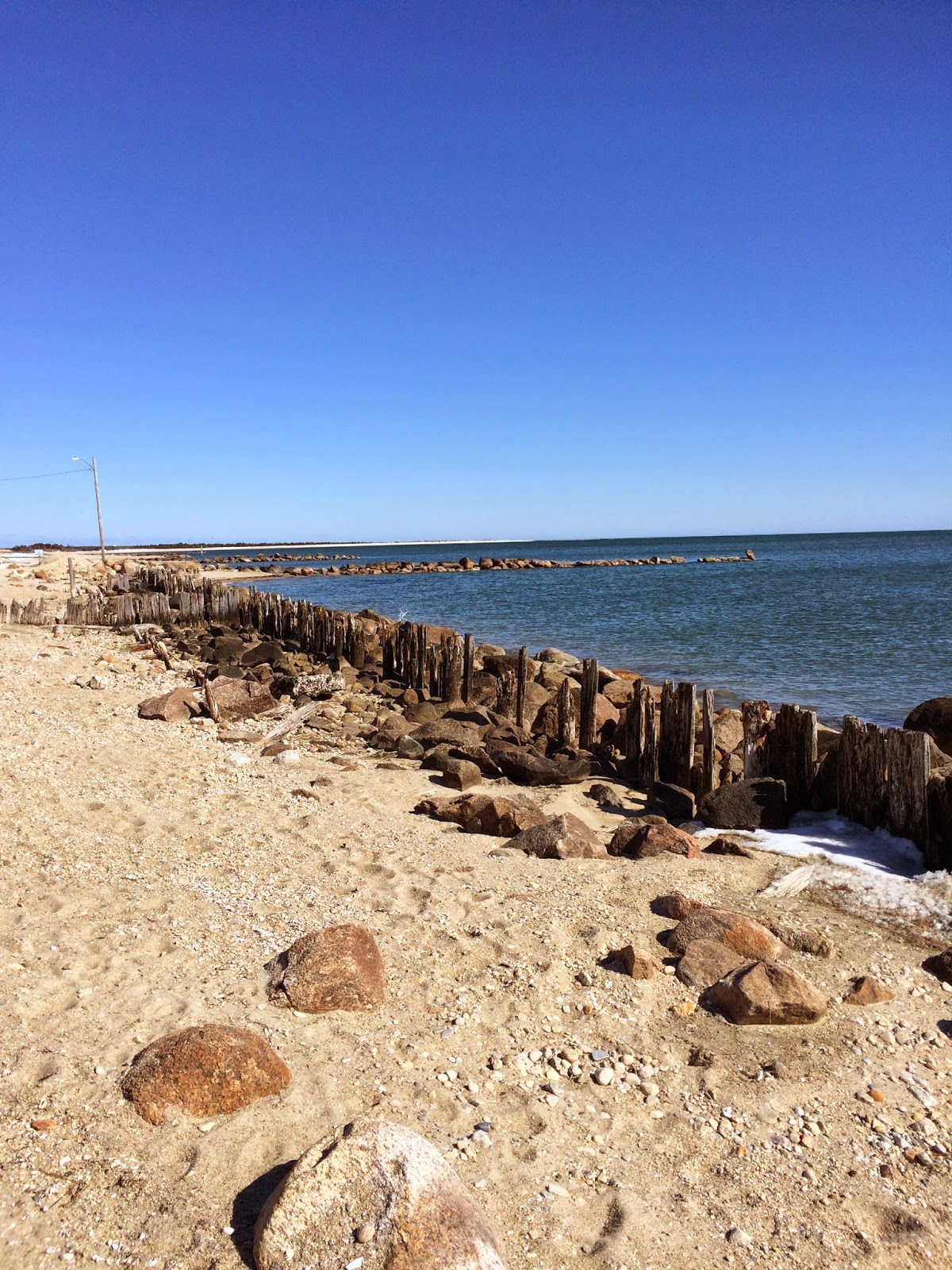 While my sister-in-law is visiting her Peace Corps daughter in Cambodia I am walking her dog every weekday. Lisa's fiance is taking care of him here on Cape the rest of the time, but his regular dog walker lives in Cambridge, so to give Louie his daily break I stop by and take him out for a spin. I'm not his favorite, and his usual reaction to my taking him out has always been to brace his feet and refuse to walk with me. We seem to have broken that cycle; apparently I am significantly better than nothing. One day I brought Roxy with me as a special friend to walk with, as they like each other. I give him a snack and hang out with him for a bit, then I am on my way. After I finish with him I go down to the beach and walk for a bit by myself. This way I am getting in two or three miles per day without going to the gym. It is too cold to be very pleasant - still well below forty degrees every day, but the exercise and sunlight are doing me good.

Posted by Cinderellen at 6:38 PM No comments:

Within Spittin' Distance of Spring 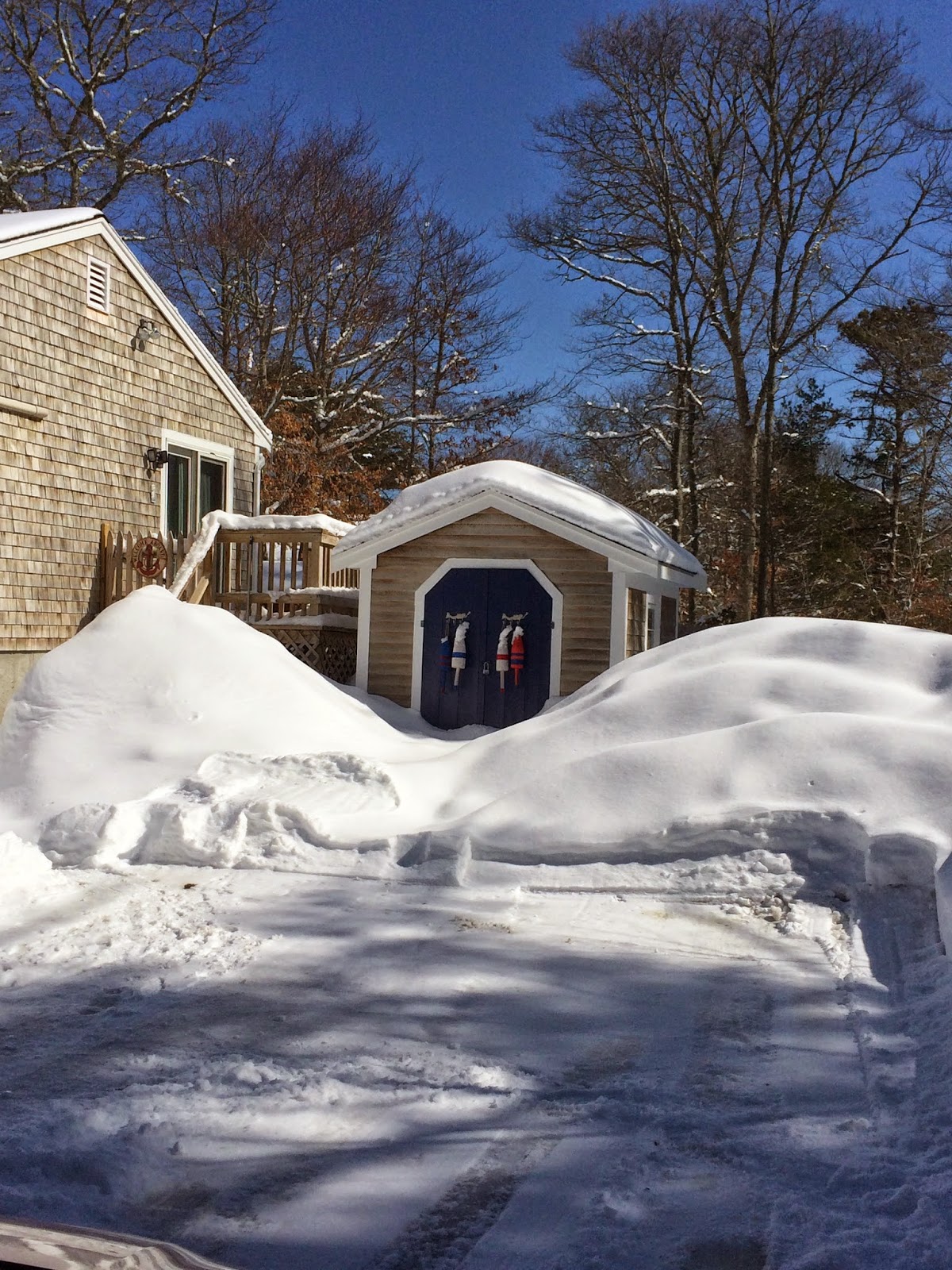 Every day I see more signs of spring - the birds are singing, the days are longer, Daylight Savings Time is in effect. The tree buds are swelling, as are the flower buds on my big rhododendrons. I don't know what's happening to the dwarf rhodys - they are still completely covered with snow. I am doing Weight Watchers Online in an effort to reconcile my body and my shorts. I just can't get excited about buying new shorts to accommodate a tubbier waist. We had four thrilling days with temperatures in the low 40s. We are back in the 30's again, with snow forecast for Saturday, but I can see nearly half of my bird bath and I think spring is coming. I swear I will stop posting snow pictures soon, except that tomorrow morning we are driving out to Wellfleet to try to get a look at the giant ice chunks that are washing ashore there.  I'll probably post pictures of those! The news guys keep saying that this is a once-in-a-generation sight, So I'd better not pass it up because I am too lazy to drive down Cape to see it. 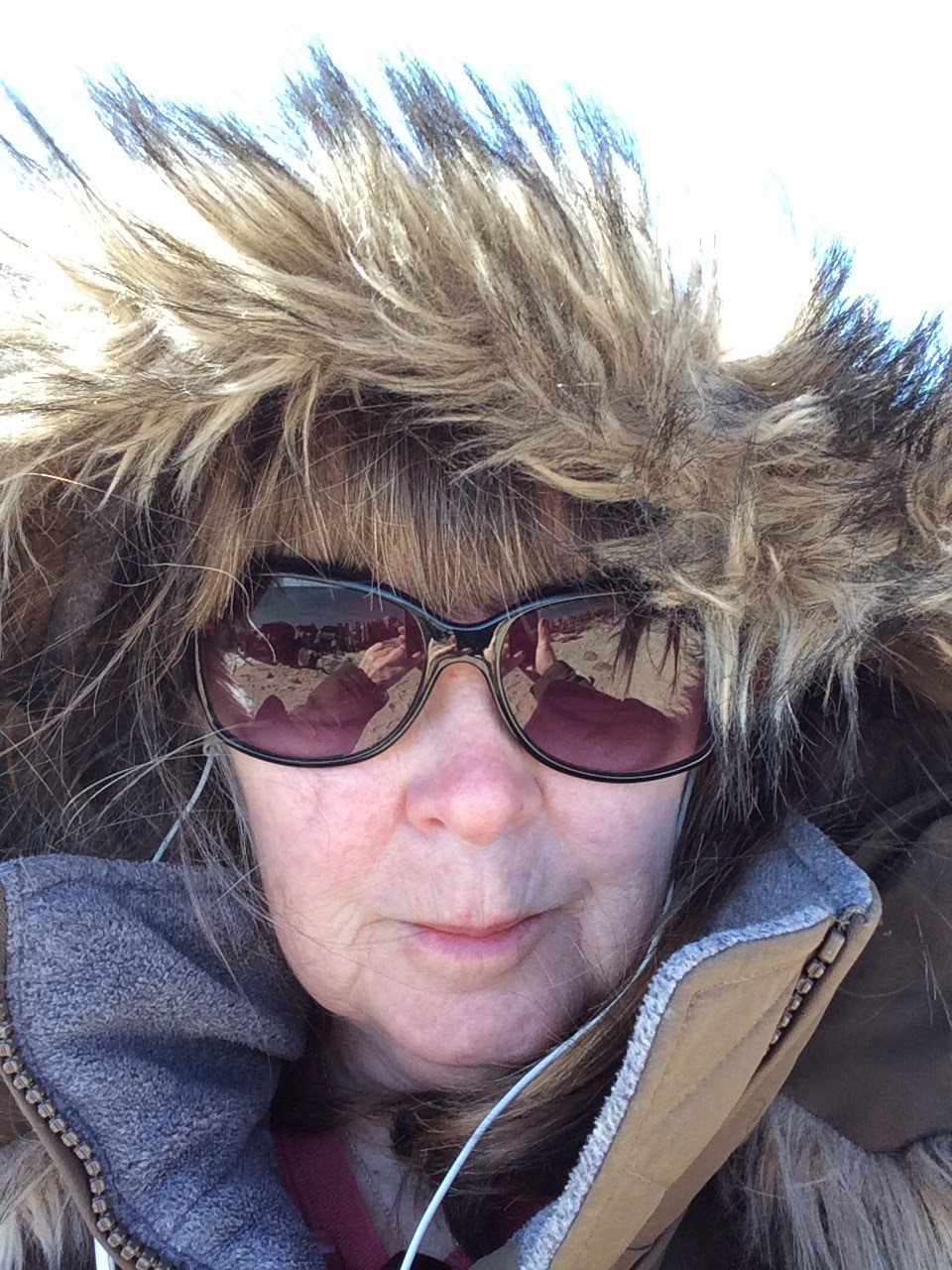 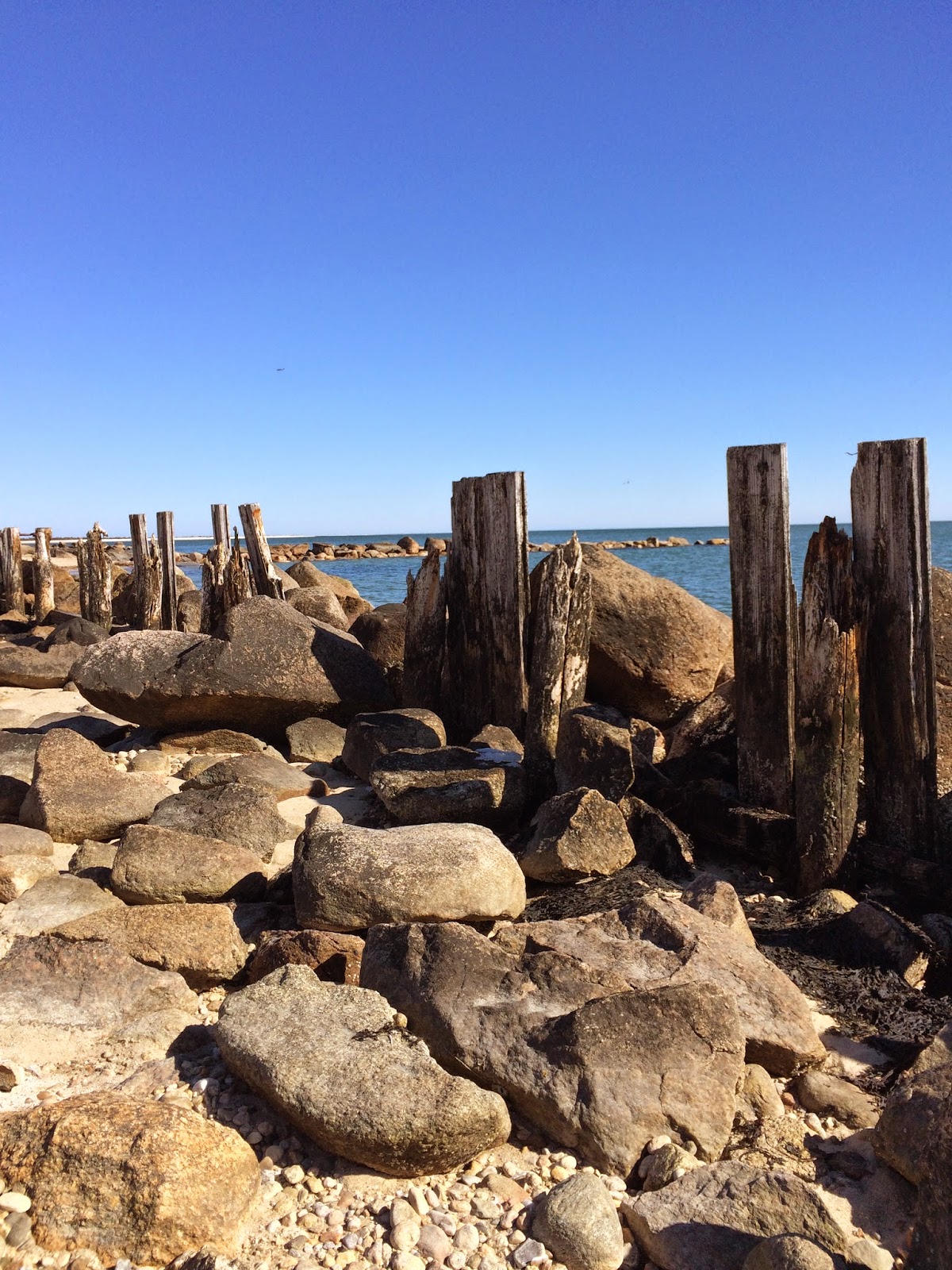 I went for a nice walk on Menahaunt Beach this afternoon. I was planning to go to the gym, but I had on a warm coat so I soaked up a little sun and gathered a handful of beach glass instead.  Like most of the Cape Cod beaches, this one had some erosion over the winter, but not as bad as the Bay and Atlantic beaches. 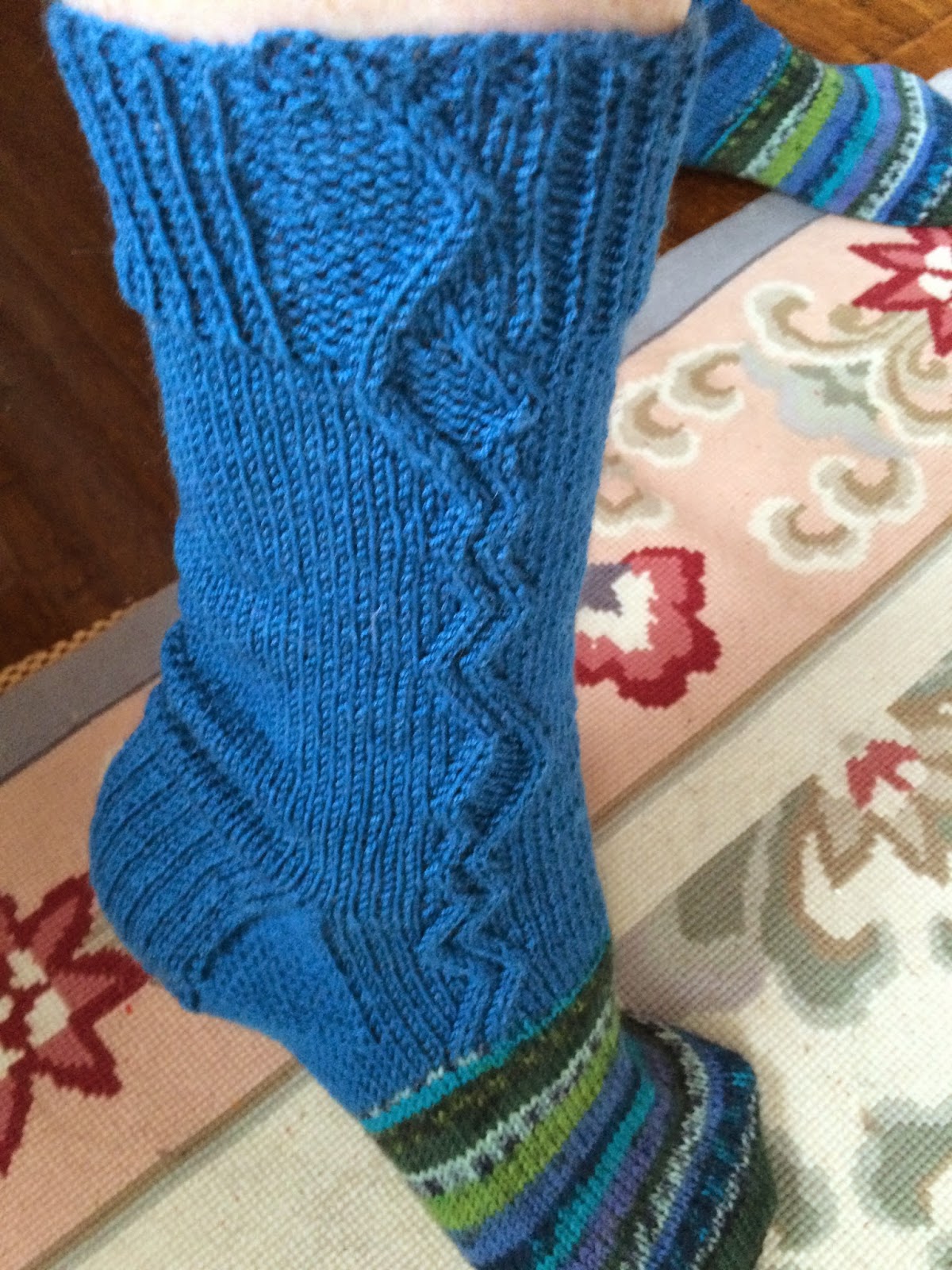 I'm still knitting like crazy. I work on my Must Have Cardigan early in the day while the light holds - there are large sections of "knit the knits and purl the purls" for which I need decent light. I am just a few inches up the back section, but I'm not going to hurry. I'd like to have it for a Rhinebeck sweater but with Little Wave already finished I will have at least one to wear and need not rush this one. Two pair of socks for myself so far with another pair down to the heel on the first sock, and my Christmas yarn shawl is about a third done. I've got yarn wound and a pattern selected for a lace shawl but have not cast on yet. I'm spending a lot of time indoors so far this year, and things are happening on the needles.

Roxy went for her yearly checkup this week. At 16 years old she is in good shape but could use some dental attention. I'm hesitating because at her age I would rather not chance anesthesia. Doctor says it's better nowadays, but I am not quite convinced. She's enjoying her walks, and as long as the ice on the street does not cut into her paws she's happy to get out there.
Posted by Cinderellen at 5:35 PM No comments:

Let's Think About Something Else

Our snow total for yesterday was a foot. In March. Temperatures under 20° all day. I'm grouchy, so we need some elevating content:

Posted by Cinderellen at 6:51 PM No comments: 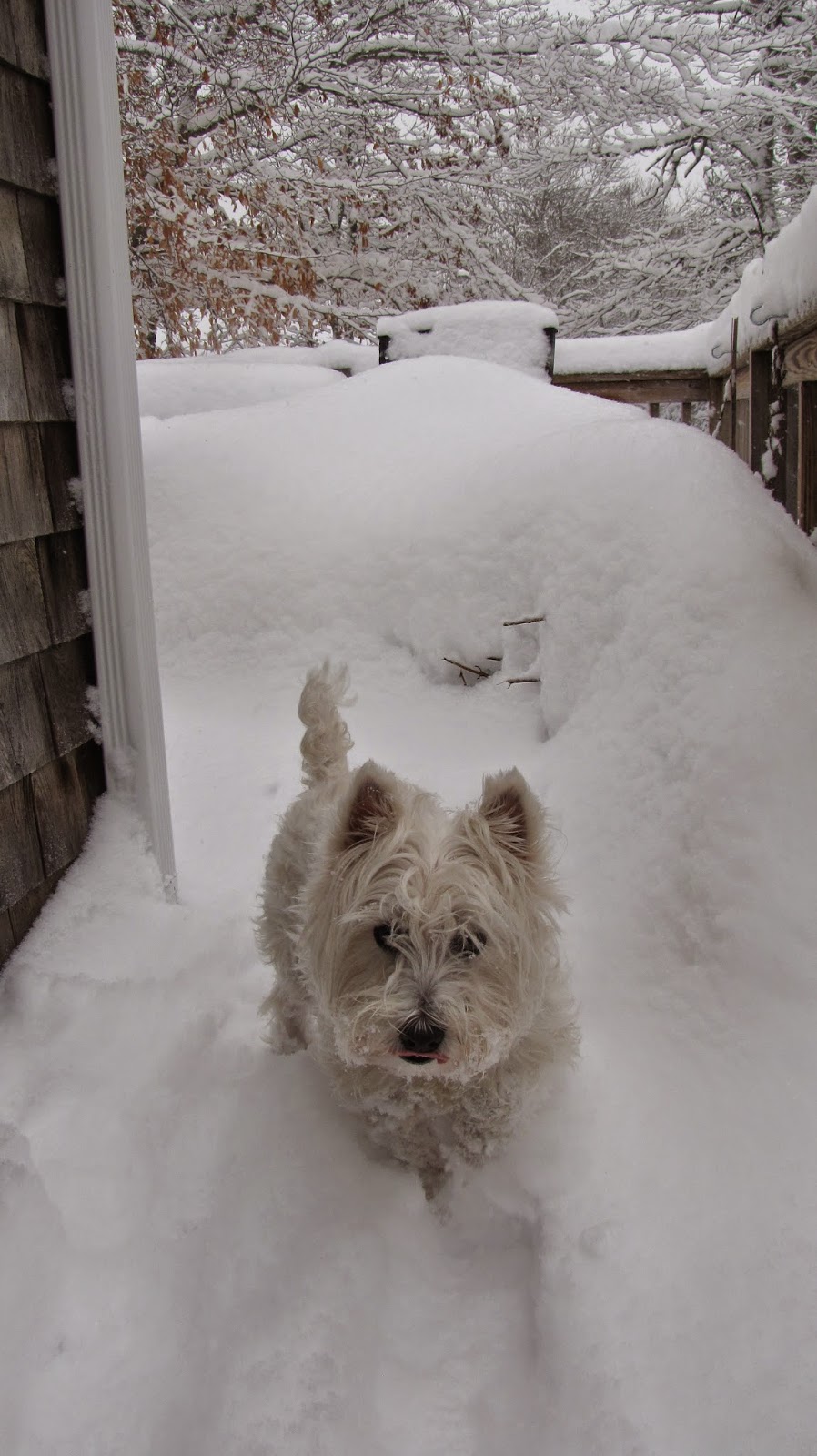 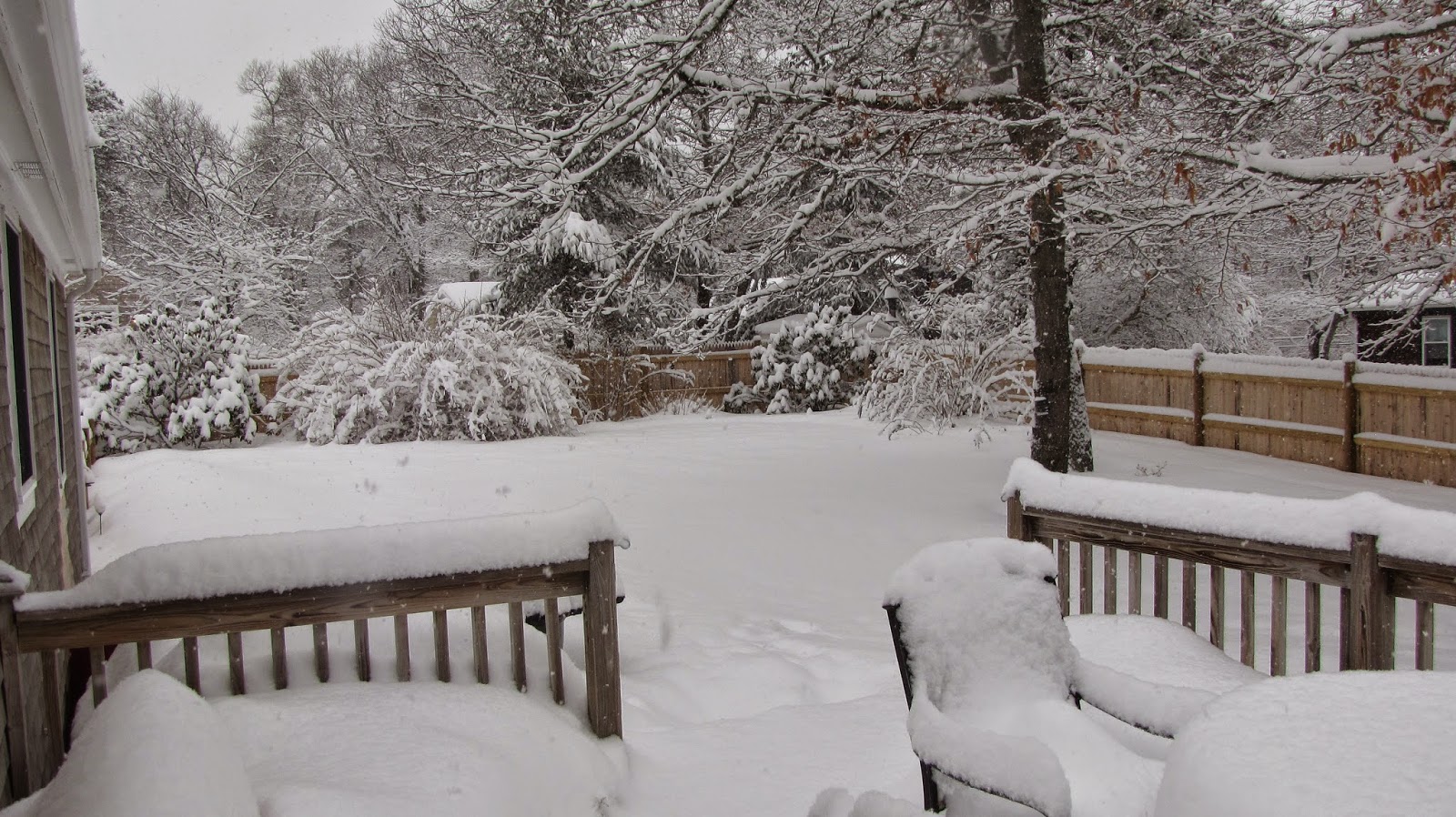 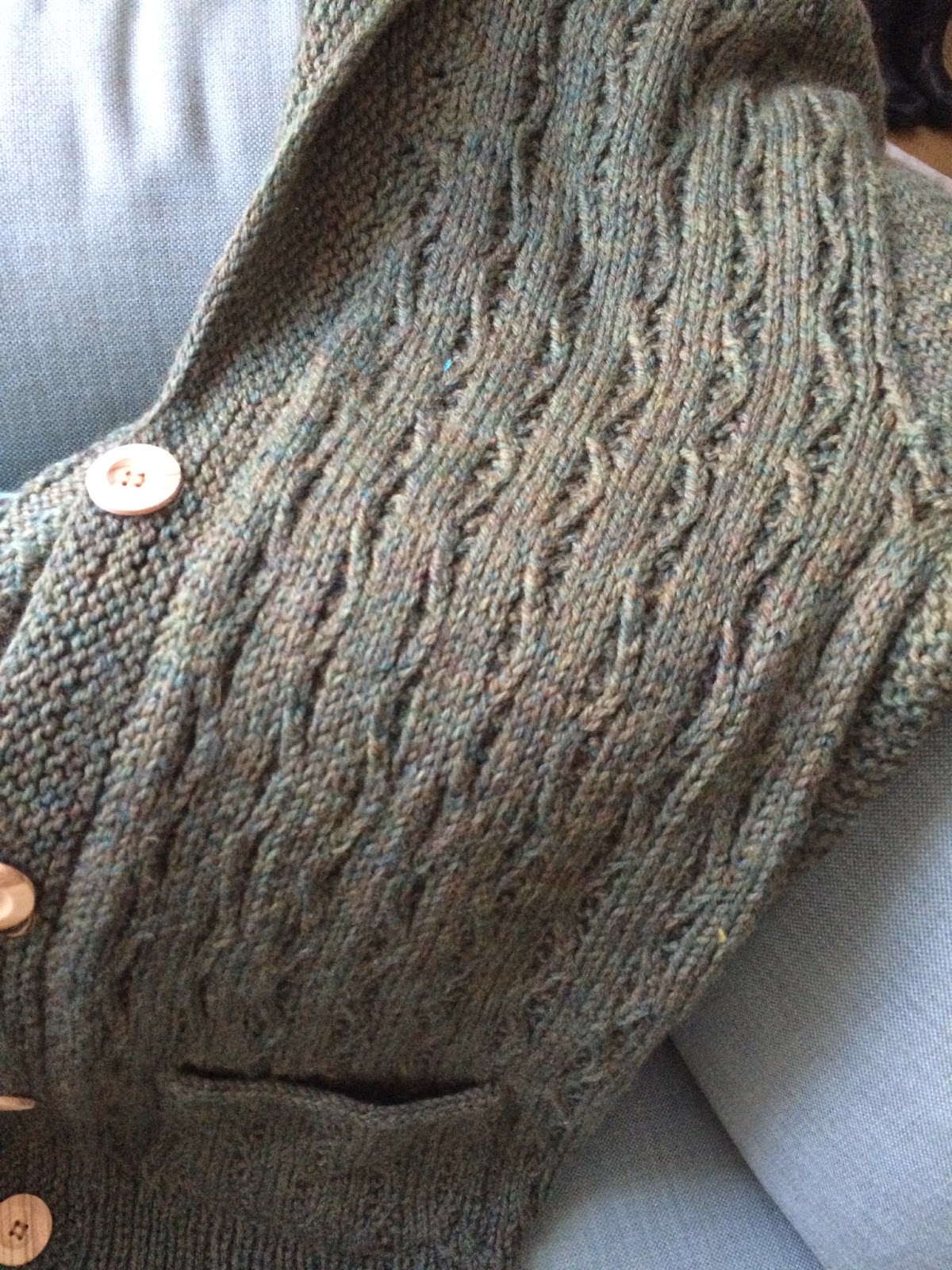 
Posted by Cinderellen at 3:57 PM No comments: