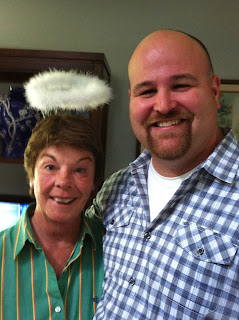 So far September had been a blur around here. Labor Day has come and gone and with it the tourists, but our personal tourists have been here in the past week.

Last weekend we hosted Nancy and Matt for a visit to attend my father-in-law's memorial service. Now that we live half a continent away we seldom see them. We saw at least every other week when we lived in Oklahoma and it has left a big hole in Shana's life not to visit with them often. I am in contact on Facebook, but there is no substitute for a comfortable chat with someone who has known you since you were a child, as everyone who lives far from family has reason to know. Being surrounded by her visiting step family Shana was especially glad to have her own family here for the weekend. 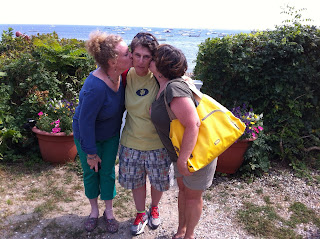 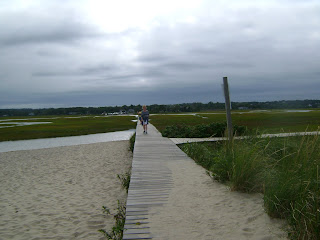 I had occasion to visit with a lot of Bruce's relatives who I had never met. It was interesting to see them and hear their memories of him as a young man. There are family mannerisms that surprised me, even in his nephews. It was good to talk with his friends too, and hear their stories of shared experiences. He had several close friends in Menahaunt who will miss him.

As soon as our family guests left my best friend in Oklahoma City and her partner came to stay for a few days. I say "stay", but their visit was all go-go-go! I wanted them to have a good time and to see as much of my new home as possible - I called it the "sampler tour" of Massachusetts.  Lucky for us the weather favored us, and Shana and I were able to take time off to spend with our guests. We really only had a short spell of rainy weather, and that during our dinner in Boston. We visited Sandwich with its charming downtown and  its beautiful boardwalk for our first day, then the astoundingly beautiful Cape Cod National Seashore the next. Because our tourist season is pretty much over the beaches were not at all crowded. Thursday found us doing a whirlwind tour of Provincetown including a stop at Buddha and Beads, which I have been dying to visit, and Friday in Boston for a bit of the Freedom Trail and dinner on the North end. I took them around the places I love and some things I had not found time to visit yet, but for me I think the best time was every morning having coffee with Sharon Jean. I have good friends here, but I miss my friends from Oklahoma City. A dinner and breakfast once a year does not really take the place of all those hours riding along together on our bikes in the country. 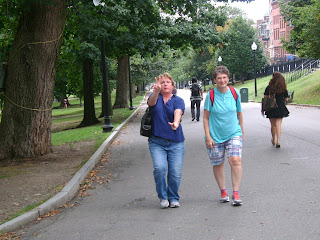 I has excited to be able to follow part of the Freedom Trail on this visit. I've often wanted to do it, but our trips into town are so few, and city attractions so numerous that we never made time for it. We were all very disappointed to find that the Old Corner Book Store on the Freedom Walk has been replaced by a Chipotle, but fortunately we were able to locate another used book store very nearby. Shana had to forcibly remove me from the premises. 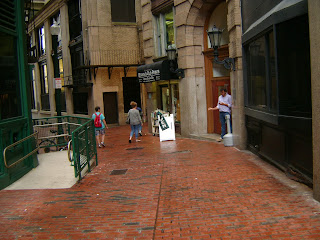 I did some shopping while our guests were here, too. With the excuse of shopping with my friends I found the perfect object for the empty wall in our living room, a little pottery dish for our kitchen sink SOS pad, and 5 FIVE books, four from second hand stores and one a Freedom Trail Guidebook. That makes this week just about perfect.

Posted by Cinderellen at 12:12 PM No comments: 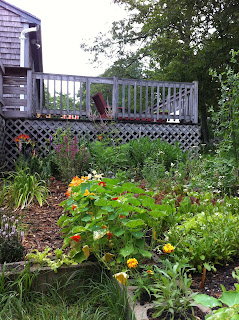 
Posted by Cinderellen at 4:21 PM No comments: 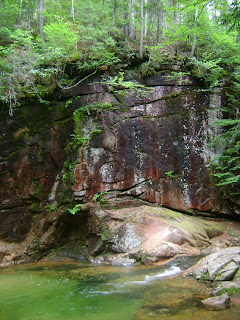 It struck me this morning, looking at a blog post from a vacationing blogger, how consistent vacations snaps are. Nearly all are of lovely outdoor scenes. Some are grand and imposing, others are views from the porch of a rental cottage, but nearly all are outdoors. Now it is just possible that because of the person that I am I have chosen bloggers and Instagrammers to follow who are outdoor minded like myself. Surely there are masses of people whose vacations favor indoor pursuits like gambling and shopping; cruise ships embark with full complements of passengers daily. Still I choose to believe that it is the beauty of nature that people seek for their restorative vacations.

Indeed science is proving that humans need to be outdoors for optimal health.
Posted by Cinderellen at 8:39 AM No comments:

Labor Day is here again, and once again labor unions are under attack by the oligarchy. Let's not forget who fought for and won our 40 hour week, child labor laws, OSHA, Workers' Compensation, weekends, and so many of the things we take for granted.

There once was a union maid, she never was afraid
Of goons and ginks and company finks and the deputy sheriffs who made the raid.
She went to the union hall when a meeting it was called, And when the Legion boys come 'round She always stood her ground.

This union maid was wise to the tricks of company spies,
She couldn't be fooled by a company stool, she'd always organize the guys.
She always got her way when she struck for better pay.
She'd show her card to the National Guard And this is what she'd say

You gals who want to be free, just take a tip from me;
Get you a man who's a union man and join the ladies' auxiliary.
Married life ain't hard when you got a union card,
A union man has a happy life when he's got a union wife.
Posted by Cinderellen at 2:48 PM No comments: