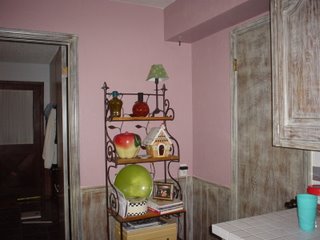 Still summer - shocking, I know. Shana and I had big plans to get out for a ride this evening, but when it's 105 at 6:30 pm that is so not on. I'll satisfy my bike self by watching the Tour de France.

We changed up the kitchen a bit this year - now that we've lived it for a while I feel like it looks like an actual room: 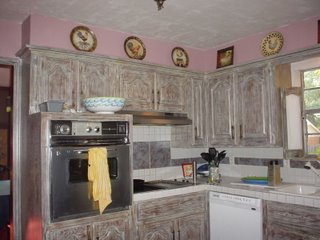 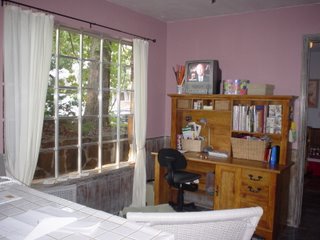 The kitchen table has been cancelled due to lack of interest. Instead a seating area and CRAFTS DESK are now in the space. My knitting books, magazines needles, notions, sewing machine, monkey supply box, and yarn stash have a home. Not to mention the odd bits of ribbon, rubber stamps, and crafty goodness of all kinds. Now that it's been in place a few months I can say it works very well. I've tried a few different kinds of projects in the space and it seems to be quite convenient. Also it allows me to enjoy Shana's company while I craft and she cooks. We had been pursuing our hobbies in different parts of the house, so we are both pleased with the result. The walls look a lot lighter in the pictures than they really are, but they are pink.

Turns out we have another knitter in the office, and one gal who wants to be led astray. Yarn Harlot comes to Oklahoma City next week and we're going to make it something of a group pilgrimage. That's four knitters I know of, a couple of cross stitchers, and at least one "hooker" besides myself. Maybe it's time to try the lunchtime St**ch and B**ch again. It might have a better chance of catching on now.

Weight Watchers was a disappointment this week - or maybe I should say I was a dosappointment. I only lost .2 lbs. Portion creep, I'm sure. I actually need to be dropping my portion size a little to get my points down to the next level. Back to work counting points at every meal. At least I haven't gained. I'm determined to get the rebate from the company.
Posted by Cinderellen at 8:03 PM