My Birthday Weekend in Boston 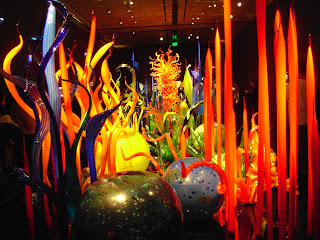 For my birthday weekend Shana and I drove into Boston and stayed at Lisa's place while she visited on the Cape.  My particular goal was to see the Dale Chihuly glass exhibit at the Boston Museum of Fine Arts.  I had seen a little of his work at the Oklahoma City Museum of Art and was really excited about seeing more.  I was absolutely not disappointed.  There were several rooms of  very large installations, and also rooms of smaller pieces with inspiration pieces and sketches.  The work was just stunning.  It was such a popular exhibit that throngs of people were waiting to come through. The BMFA was so overwhelmed that they were not checking coats and packages. If we had not had member passes I don't know if we would have been able to get in on the day we went.  Even with the crowds it was easy to  get a close look and lots of (wholly inadequate) pictures.  I've got a lot over at my Flickr Gallery. 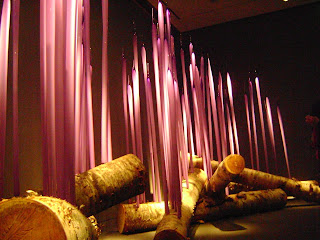 Other birthday weekend activities included an Indian dinner, a visit to Whole Foods, a lovely Sunday nap and a movie.  We  saw Water for Elephants, which was pretty much as I expected, but quite nice to look at and the sort of undemanding movie I wanted to see. Quite a satisfactory weekend and a nice chance for Shana and I to enjoy each other's company.
Posted by Cinderellen at 7:52 AM

Chihuly is astounding! Saw some of his stuff in Baltimore years ago and it blew my mind. Glad you got a chance to get away and enjoy.