This week has been a mix of things, some good and some not so much. On the good side I think we are turning the corner on the move. We've sold the house: which is a tangible sign that things are moving forward. I've got the kids' old rooms emptied and swept out. That was a big job, and one I struggled to complete. I've been through the viler corners of my room and my craft stash, so the first purge has been done. I've been unable to do all my purging in one pass because of my tendency never to throw anything out. In some cases this has been good because I've been able to come up with oddball things at just the right time, but there is this little downside...By the end of this three day weekend I expect to see a lot of progress. Shana will have most of her things packed up - she'll be out of town for a few days starting mid-week, so she has less time to dawdle around than I do. Shelley is coming over to help us with the packing today, and Rita will be helping my pack up my books. God help me. Actually, I use my books so brutally that I don't think she can do much more damage to them. 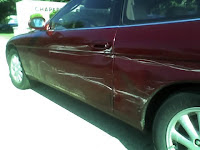 I had a bit of car trouble yesterday. I've been using a borrowed car lately while Alex is driving my little Focus. He was driving his dad's Lexus and found it too expensive to run and too nerve wracking to protect from dings and scratches. It's low mileage and has been babied so that although it's and older car it's really pretty. Yesterday I was standing at a friend's desk when one of my co-workers came up to me with a strange look and a stranger question: "are you the one who drives the nice Lexus?" My stomach began to hurt immediately. It seems that she got crosswise with her nearly brand new Buick and creamed the driver's side of my borrowed car. I was horrified and upset, the more so because it's not my car. It looks even worse in person. She gave me her insurance information and I drove home taking care of my usual Friday errands on the way. It was inconvenient because while I could open the driver's side door from the inside, I had to climb in over the bucket seats and stick shift from the passenger's side. I called Elaine's insurance company (USAA, and they were wonderful) to be told that they'd be arranging to have the car towed to the repair facility because it would be unsafe to drive. DUH - with the door latch obviously compromised the door might swing open at any time! Until the car is repaired I have a rental Chevy Malibu with 400 miles on the odometer. This is quite a novelty because I have not driven a brand new car for some time. It's especially nice since it wasn't even my car that was damaged.

Today is also the big opening Saturday of college football - so we should be enjoyably diverted while we pack. I'm hoping to finish the garter rib sock, or at least get past the heel, before the football ends for the day.
Posted by Unknown at 10:02 AM