A Little Change that Makes a Big Difference 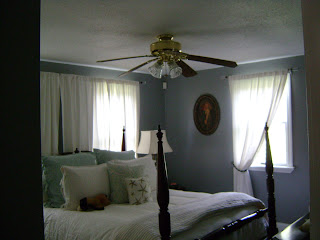 Before we even had picked out a house to put it in we had purchased a little white and crystal chandelier for our bedroom. It's been in a box for months - the promise of a pretty bedroom for us. The house we bought had a ceiling fan the size of a helicopter (a very nice fan but not at all my taste and much too large for the room) which because of the way it was wired had to wait for an electrician to replace it with our chandelier. Today was the day! I think our chandelier is a perfect fit and adds a little more charm to our room. All of the lamps in the room feature sparkly crystals, so that big brown object on the ceiling did not add a thing. 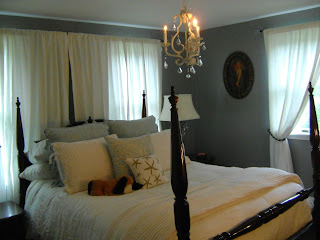 Because of the peculiarities of our house's wiring when the new lamp was installed no other lights in the house would come on. I nearly fell out the back door in conniptions, but after another run at the problem the electricians set things to rights and things are now all working correctly; our pretty bedroom is complete except for a teeny bit of painting I'll probably do tomorrow morning - the bit of ceiling that used to be covered by the fan and is not covered by the much smaller lamp base, and the baseboards. 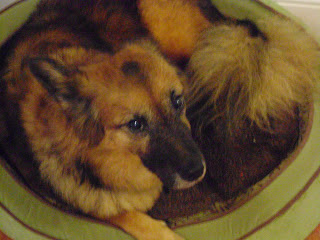 Roxy was also very pleased because she has grown to love having workmen in the house. She was quite disappointed when I put her outside on the lead and entertained the neighborhood with barking until it started raining and I brought her in. I'm afraid any pretensions she may have had to being a watch dog are proven totally false.
Posted by Unknown at 1:59 PM

Roxie looks like she has forgiven you, almost. hehe

The little chandelier looks great, but aren't the blades too lengthy for your ceiling? Hmm.. Yeah, the old ceiling fan was a little too big for the room. Where did you transfer it? That look can make a good appearance in the kitchen. It can keep pests away, too, when you're preparing or having meal.