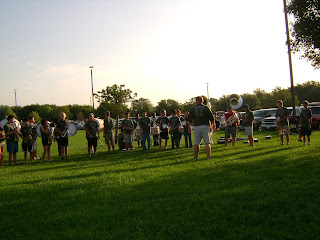 Yesterday we drove down to Duncan for the yearly Dehydrator. It's one of our yearly visits because it's a well organized and enjoyable ride (with lunch!). In our training schedule it comes at the point where we are looking for a 50-63 mile ride in the heat on a fairly flat course to evaluate our training up to that point. Because the ride benefits the local high school marching band the morning starts with music from the band itself. Just before the race and the ride left we had a prayer led by the town mayor, then were played out by the band (think tunes like "Rocky"). 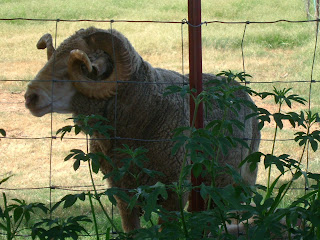 In the past the route has been two medium to large hills early on, followed by a flat section of intense boredom relieved on the 66 mile course by two passes across a large lake, then back over the same two hills to the finish. I had signed up for the 66 mile course (which is actually 69 miles) but had decided to do the 53. This year the course and distances were changed slightly to be closely compliant with the stated mileage of 62, 50, and 26 miles and to go over different roads for a more scenic ride. The end of the ride was over the same hills in the last 10 miles, but the prior route was completely different. I saw lots of sheep, goats, and chickens in addition to the usual c 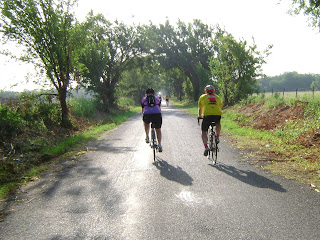 attle, horses, and burros of Stephens County. There were gently rolling hills, and a pass through a neighboring small town. As we rode along over the new route I thought about going on to the longer route. This idea died as the heat quickly picked up. When the new and improved 50 mile route passed over the lake I felt that I would have had the full experience without stepping up to the longest ride (the only course on the old route that passed over the lake). It turned out to be a good choice, because by the time we passed the 30 mile stop temperatures were well over 100, and by the time we got to the 40 mile stop the temperature on the road had reached 109. On of our party cramped and Shana took her back in in my car. Alan bonked but 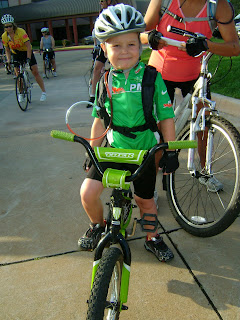 did finish his ride after a flat tire four miles out from the finish and learned a valuable lesson in hot weather riding. We're all hitting the bike store this week to get some electrolyte concentrate because the usual Gatorade offered on organized rides does not contain nearly enough for temperatures this high unless you can get bananas at every stop.
Young Blake (5) was a first time participant under his own steam (he'd been on a child's tandem on previous rides) and finished his 10 mile ride. Although he was the last finisher on his ride he did finish and we were all proud of him.
Today I'll be taking Vivian to church with Aunt Rita and we'll have Sam and Alex joining us for lunch. Big fun all weekend long!