Melissa Made Me Do It 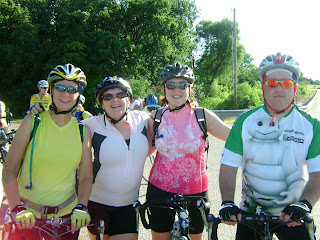 We rode the the annual Norman Conquest today. We were so lucky with the weather: temperatures from 70's to low 80's during the ride, sunny skies and no wind. It was the kind of day we seldom get in Oklahoma and I was prepared to make the most of it. Some of my friends were planning to ride, so I'd have the extra fun of company during the ride. I was planning to attempt the 48 mile ride, which I have done before. Alan also had his sights set on the 48. Somewhere around mile 12 we both decided that maybe the shorter 22 mile ride might be more suitable. The toughest hills the last time I did the ride were asphalt in not-quite-prime condition. S 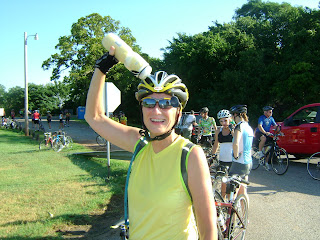 ome care needed to be taken to pick a good line to ride to avoid potholes, but the surface was otherwise OK. Sometime between then and now a new chip seal surface had been added. This is becoming a pretty common surface, especially these days when money for road improvements is getting to be a bit sparse. I understand the need to use it, but it's not always the nicest surface for cyclists. A fresh surface like this is almost like a gravel road, with all the opportunities for sliding around and for rocks to be kicked up at you by passing traffic. A year later after traffic has had a chance to squash the gravel into the tarry surface it's usually OK, but it's not a very fast surface. If really big chunks of aggregate are used (as this stretch was) it is a really rough road that will test your personal structural integrity in addition to that of your bike. It might improve your chances of scoring a 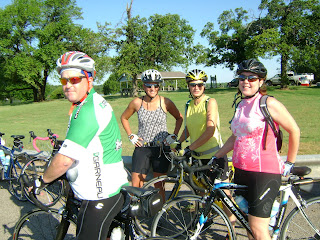 nice slightly used water bottle as they tend to shake loose on this surface. I may improve your balance because the consequences of falling on it are so awful. It will certainly give you many opportunities to improve your fitness level by exerting more energy. You have to put out a lot more effort pedalling, and this year I just did not have it to spare. None of us thought we were up for a longer distance after fighting our way up the first part of the course.


Having decided on the shorter distance we cheerfully proceeded down the road at a pleasantly leisurely speed knowing that we were not going to be suffering over a long distance. Alan was riding quite a bit faster than Melissa, and I slowed a bit and paused to let her c 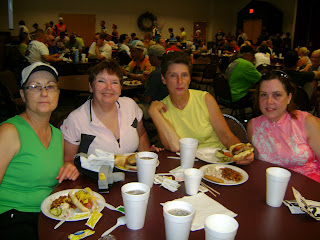 atch up with me so he could go on ahead at his own pace. This is where our trouble started. The worst of the hills were past, and on the gently rolling verdant terrain in the cool morning we had a chance to visit. Our thoughts turned to knitting. Our talk turned to Monkey Socks, of which Melissa was making her first pair. We missed our turn. About four miles down the road Melissa noticed that we were coming up on 22 miles without reaching town. We noticed the lack of yellow arrows on the road. The yellow arrows were the markers for our distance. We were on the 48 mile course, which I might survive but would not enjoy, and which Melissa would not have the strength to do. Melissa flagged down a passing sag wagon and we loaded our bikes into the back. After driving on a couple of miles to see if Alan had made the same mistake we decided that instead of sagging all the 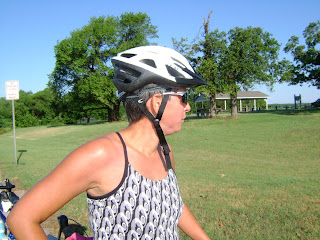 way in we'd like to be dropped at the last rest stop, which would let us finish with a distance of roughly 30 miles. This was the very distance Melissa had wished was offered, so we jumped back out of the sag wagon and finished a ride of a bit over 32 miles. As it turned out Alan had made the same mistake (without the excellent excuse of knitting talk), but instead of calling the sag to the rescue he adjusted his route to join back up with the 22 mile course. He ended the day with a ride of about 38 miles.

The Bicycle League of Norman puts on a good ride with great support, a good lunch and a drawing for loads of good stuff. Our table was well represented among the winners although to my great disappointment someone else was awarded the Shimano sandals I had hoped to claim.
Posted by Cinderellen at 3:06 PM

That was a very interesting experience and well organized, with perfect weather. Thanks for sharing it. DH and I rode bikes for most of our marriage until a spill told me the biking was over for good. It's so fun to read about your bike rides. Thanks for sharing your rides. :)