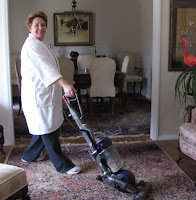 settled on this one. The spendy price is somewhat offset by the lack of bags, filters or belts needing to be purchased on a special pilgrimage to the home of the Kenmore. It has no bags or belts, and the filters are washable. After assembly, Shana put on the Official Vacuuming Uniform and proceeded to take it for a spin. We were very happy with its performance. Not only does it suck like crazy, but also you get to enjoy the sight of the offending dirt building up in the collection chamber. I had no idea how much dog hair we had on the floor. That's really saying something, because except for the bedrooms we have hardwood and tile floors, where dog hair collects in the corners in drifts where it can be plainly seen. I thought I had seen all of the dog hair. But NO. This container full of dog hair is not a loose collection of hair pressed against the sides. This is a tightly packed mass of hair that was removed with some effort from the container in layers and clumps closely resembling felt. I really believe we could have assembled an entire additional dog from the hair we dumped in the trash. It was thrilling. We are easily amused, and lead riveting lives.
Posted by Unknown at 3:00 PM