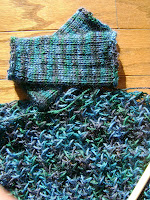 2009 has started, and I still have no resolutions, although I'm pretty sure my family and friends will be happy to suggest some.

I'm knitting away on projects for myself. I've got several for which I have had yarn for some time, and had never started for one reason or another. I am determined to make some these up and enjoy them. Currently it's a version of My So Called Scarf in a beautiful mohair and silk blend from Cherry Tree Hill that I purchased in Boston two years ago. It was a pretty big skein, so I thought it would make a generous scarf for me - and I like them really long. When I got to six feet with loads still left I decided I had enough for a matching pair of mitts. I broke the yarn, and cranked out the mitts (loosely based on Fetching, from Knitty) with the intention of using up all of the yarn remaining on the scarf. A normal person might have made a hat as well, but I had my heart set on a giant scarf. Also I was anxious to see how the fabric would bloom with washing. The mitts are soft, with a beautiful sheen and a suggestion of a halo. I think they will pill like crazy, so they are not really suitable for heavy use (that's what Wool Ease is for!), but so pretty all will be forgiven. 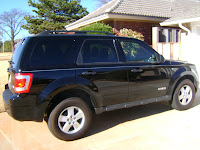 Of course there are plans for vigorous exercise, loss of weight, and good behavior. I'll need to be as thrifty as possible to keep moving towards my goals because I got a new (to me) car which will increase my car payment significantly. I was at the point of considering major repairs or a newer vehicle, and opted for something a lot newer which will be able to carry me across the country for a thrilling and relatively inexpensive trip to the Grand Canyon this summer. I think that for a bit less than we generally spend to vacation in Marco we can have a spectacular camping trip, even though my new Escape will use more gas than my old Focus did. Air fares are not great, and besides Shana has never been to the Grand Canyon and I want so much for her to see it.

My other resolutions and plans have to do with mental outlook. Shana has pointed out that nobody is enjoying my cranky point of view. My general feeling is that I am angry because there is reason to be - Prop 8, Israel's terrible attack on Gaza, Wall Street running blithely away with my 401K, the likelihood that Bush and cohorts will walk away without a scratch while those who knew what was happening will suddenly remember what was really going on just in time to cash in on their memoires instead of bringing it up while there was time to do something to stop them. To shrug and say nothing is the same as saying it is all OK and business as usual. I guess I'll have to take a page from Zippy's book and search for serenity and compassion. Maybe I'll be able to find a kind and compassionate way to tell people they are full of crap and the world is falling down around them while they smile! Either that or search out a group of like minded people to complain with.
Posted by Unknown at 12:33 PM

And so what else is new? The few always walk with the cash and the rest pay. Why do you think this will be any different? Your mother