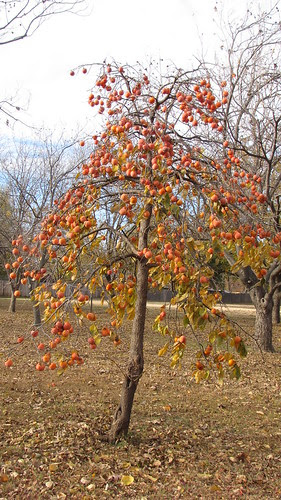 A persimmon is a funny thing. When the leaves are green and the weather is fine it's not at all good to eat. After the leaves fall and there have been some hard freezes it changes to something delicious. It's one of the things in life that needs a little hardship to make it sweet.

I did not blog last weekend - once the events in Arizona became known I retreated into introspection. I've been living in a red state a long time, but have never made a secret that I'm a blue state sort of girl. I've been getting ready lately to move to Massachusetts and have been giving a lot of thought to how much I am going to miss this place I've lived for so many years. Turns out maybe not so much. I did not really believe they would kill us, and cheer on the ones who did the deed. I'm ready to go east without a backwards glance, except at the wide horizons and open spaces that have endeared themselves to my eyes.

I'll miss my children, Shana's family, and a very few friends, but not the politics of Oklahoma, my unfriends, and my frenemies. I'll unfriend them on Facebook and never hear of them again when I leave. I'm doing a drastic purge of my possessions, and to everything I leave behind I'll say "Bon Debarass". Last day at work will be March 15, and drive away day is tentatively scheduled for March 20.