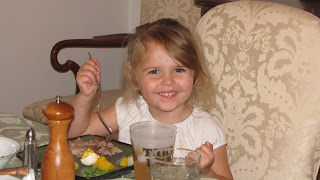 Alex and Vivian came over for dinner yesterday. Samantha had a scheduling conflict and was unable to join us. Vivi is growing fast and is turning into a very chatty little girl. She actually ate some of her dinner and was a very good dinner guest.
After dinner Alex and I retired to the den. We compared our precious smart phones. Alex alternately played games with my phone and watched TV. I played with "the baby" and got 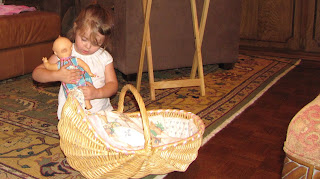 the fine details of youth culture (emphasis on the most modern incarnation of the Green Lantern).
When Vivian first started to come over for Grandma play dates I picked up a few basic toys:
a couple of baby dolls with a little "moses basket", a rhythm band, a few balls and little cars, and a set of blocks. I added a Sit N Spin a little later. That's all there is to Grandma's toy box. It seems that's all there needs to be. Each toy changes in function from time to time . At first she poked at the eyes of the baby dolls; now she hugs them and pats their little bums. First she tried climbing into the baby basket; now she carries the babies around in it after tucking them in. The babies' blanket gets used to put Grandma down for a nap. Blocks were at first just stacked, now they become birthday cakes or dinner tables, remotes controls or cell phones. These are pretty much the same toys I had when I was a child - basic, inexpensive, and classic. In spite of the wonderful electronics available today some things don't change a bit.
Posted by Cinderellen at 1:25 PM

Sweet pictures. She is really growing up! Enjoy the times.