A (kind of) Lazy Weekend 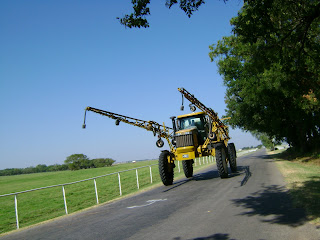 Shana and I planned a lazy weekend. We both felt like we had long and hard weeks, so we made few plans for the weekend.
I met for breakfast with friends at the excellent Classen Grill to discuss plans for Hotter 'N Hell 100 which happens next weekend in Wichita Falls. After the ride we have a community barbecue in the motel parking lot. This has proved to be more fun and less stressful than trying to get in at any restaurant in town. Although the menu is always much the same it's always a good idea to try not to have eight mustards and no onions. 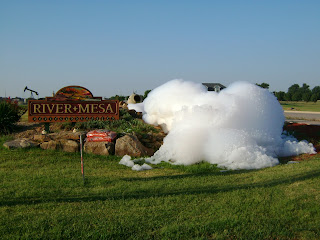 I rode out to El Reno this morning with Alan and Melissa (Sharon Jean joined us for the first ten miles or so but could not commit enough time to ride all the way today). On the way we saw a fountain full of soapy suds in a fountain - probably someone's idea of a joke. We encountered the big piece of farm machinery on the way out and also on the way back. It nearly filled the road, but when we saw it in action later in a field it did not look nearly as monstrous.
Melissa nearly got tangled up in a dog on the way back. We heard a tiny rustling in the grass and the dog was nearly on her back wheel before we even saw him. Never barked, never growled: just ran at her. He did not pursue further and we hustled up a bit to get out of his range. I think that's a dog we need to watch out for.
Posted by Cinderellen at 4:05 PM