Natasha and The Nun's Smooth Move 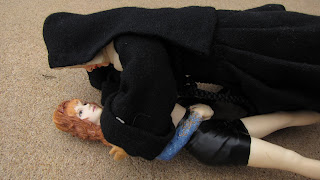 After a week of squabbling over career options, Natasha and The Nun thought that at least a quick lunch at home should be an easy thing to agree on. Both noted the popularity of smoothies of all kinds and thought it might be fun to make one to celebrate the unseasonably warm weather they were enjoying this week. Looking through the available foods in the house neither was completely satisfied with the offerings. The Nun strongly preferred to include bananas, but there were none around. She decided on a fresh 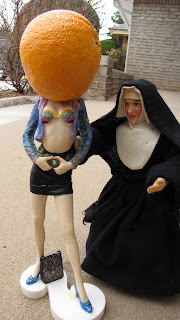 orange and frozen mixed fruit with soy powder, vanilla soy milk, and organic blueberry pomegranate juice. It’s a combo she’d had before and knew it to be delicious and balanced, as well as vegan.

Natasha had a different kind of smoothie in mind. She favored a one dish meal in a glass which would pay homage to her Russian heritage, preferably including beets, cabbage, and meat. No beets were immediately available, but there were plenty of onions, a can of collard greens and half a cabbage. There was plenty of soup base in several flavors which should provide a suitable liquid ingredient. She was willing to give The Nun some input in the form of a choice between leftover meatloaf and raw chicken as the meat component. Both were implacably passionate about their choices, and there was no way to compromise without making a drink neither one would be willing to consume. 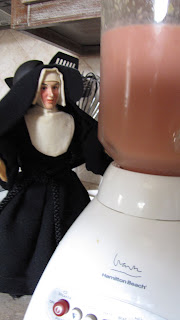 Violence erupted. The Nun proved to be a surprisingly tough opponent (she’d been to see The Wrestler quite recently) and carried the day handily. Natasha might have fared better if she hadn’t tripped over her handbag, but once the fight started the end was never seriously in doubt. The smoothie of choice (for this day, at least) would be fruit.
Posted by Unknown at 1:30 PM