Introducing Natasha and The Nun 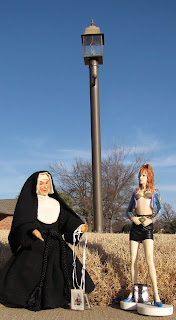 Natasha and the Nun met on a street corner. The Nun was passing out holy cards and scapulars, which rumor had it could win her bonus points and nice prizes in the hereafter. Natasha was just passing out. Natasha figured that a scapular would just be one more article of clothing to worry about. She'd had enough trouble already continually losing her shoes on the side of the road. It was cutting into her profits as it was and even though she would not have actually paid for the scapular, she'd still feel like she had to go out looking for it when it came up missing. "Time is money" she thought - not for the first time.

The Nun was disappointed, as usual. She had rather assumed that Natasha would be understanding of the frailties of others. Earlier in The Nun's career she had made the foolish error of trying to cut off her nose to spite her face. She'd only met with partial success, but even a little bit of nose missing made a poor impression on the heathens, who were unaccountably distressed by the outward appearance of 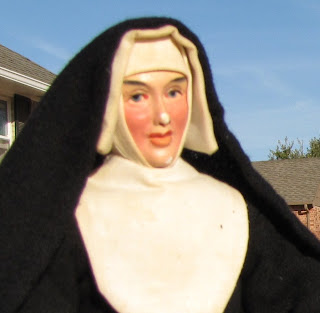 people approaching them on the street. Most Catholics seemed to assume leprosy had caused the missing bit to fall off. This was both better and worse. It did emphasize the bond of a shared education where leprosy was a much more common topic of conversation than it appeared to be among Protestants, but people did tend to assume that leprosy was in fact much more contagious than it actually is. The Nun felt that it was an extra and undesserved burden to have to explain this when she didn't even have the disease, but good manners and training made her keep explaining.
Posted by Unknown at 7:30 AM