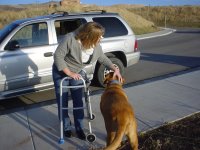 I did have a few more Boise pictures I wanted to share, although I've been home for almost a week. On Saturday Jennifer and I went out for a drive to get a look at the city from above. The dogs got to run loose a bit, and I got another perspective on the city's site. It's quite attractive, and it's easy to see why Jennifer likes it so much. I would also enjoy the opportunities for outdoor activity there, and the scenery is lovely.

Boise is also very bike friendly, with loads of convenient bike lanes everywhere. It would be very possible to get around by bike in most cases. I wish our city was as well provided for in that department. Like Oklahoma City, Boise does not have a great bus system, though. I did see some , but fewer than I would have expected. It's too bad, because the city itself is rather compact, and would be fairly easy to supply with good transportation. Because the city is surrounded by mountains on three sides they suffer from smoggy inversions, which would be fewer if the number of cars on the roads could be reduced. 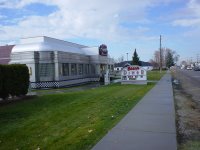 We went to the cutest diner on Friday for lunch. It's in the classic diner car format, and the inside is decorated with fifties style memorabilia. They have good sandwiches, and an actual "Shake Menu". The shakes are yummy. We were not hungry for dinner Friday night. I make a chicken biriyani, but it pretty much went straight to the freezer for another day.
Crafting continues apace. There are three new finished objects to show. 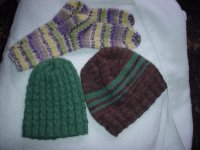 Both of the hats were done this weekend. The green one doesn't look like it, but is cabled up to the decreases. I read an article in Knitty about two stitch cables without a needle, and had to try it out. I want to do some cables socks, but could not face the cable needle fumbling over the required number of stitches. When I read this article I was inspired. I still can't quite handle cabling without a needle for more stitches. However, next year this WILL happen. Shana should enjoy my experiments, because she just loves cables. Everything I do with cables she is crazy about. 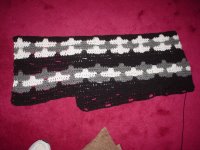 My goal for this weekend was to make some kind of visible progress on the afghan. I worked on it for hours (and hours) yesterday and it is twice the size it was when I started, but I was hoping for more. I know it is growing, but the difference isn't as dramatic and visible as I expected. When I picked out the pattern I truly did remember that I swore after Rita's afghan that I would never do another with stripes because all the ends are a royal pain. I do not know how I was able to rationalize this one. Still, I think it will be good looking in a manly way and the intended recipient will be pleased with it. I'm a little concerned about meeting deadline, though. I may have to take it to work for lunch hour to get enough time for it. I will definitely need more black yarn. When I bought the yarn I was thinking of a different pattern, which after I looked at more closely I did not like. I chose this one from a book I bought a few years ago, and the balance of color is a little different. I'll probably end up with some grey left over.
Thanksgiving was pleasant. I spent it with Shana's family, and it was very low key. We went to Buddy's, and didn't stay very long as Shana had a cold. It was nice to have a chance to visit a bit, and also nice to come home. We've both been a little tired, and I have gobs of stuff to do at home. The kids went to Dennis for Thanksgiving. Dennis actually cooked it himself, with typical last minute panic. He called me at 6:00 Wednesday to find out how to cook a turkey and make his mother's dressing. He called at 6:15 to ask about how to thaw a turkey. He called at 7:00 to ask about how to make gravy. He called at 8:00 to find out how to make a sweet potato casserole. He called at 9:00 to ask if what other vegetable he should have. He called at 10:00 to discuss how to time his cooking to get everything done at the same time. I called him Thursday morning to tell him to get his turkey in the oven. Apparently he was able to make the dinner successfully and a good time was had by all.
Posted by Unknown at 9:31 AM