It's the New Zoo Review

Jennifer's dogs came home today, so there is now a full house of animals. She's been missing the dogs terribly, and knowing how I muss my Evil Wild Dog of the Prairie I relented, with the proviso that if they proved to be too much they'd have to go back to Mark's mother for a little longer. 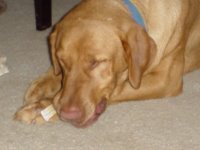 Boomer and Maggie are both labs: yellow and chocolate, respectively. Boomer is the biggest lab I've ever seen. I was not in a hurry to have them come home because I thought that labs would be too lively for Jennifer to manage, and I knew they were large dogs. Turns out that in spite of their extra jumbo size they are quite well behaved and considerably less wild and woolly in personality than The Amazing Roxanne. They do not push and shove, put their feet or their tongues on you, climb up on the furniture, leap into the air, or wrestle in the house. 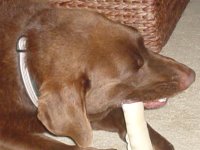 I'm finding them quite easy to manage.
The cats are another thing entirely. They go where they will, do as they please, and act as they like. In short, they behave pretty much like cats. They come in two varieties: Pippin the Terrible, and Little Guy the Shy. I confused Pippin by ignoring him for two days until he approached me. So far he has not bitten me, but I'm sure my day will come. He had no interest in my if I am looking at him, but when I don't he's all over me. He comes in and out of my 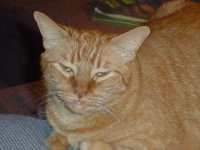 room several times each night to look at me and smell various portions of my body. Little Guy is more pleasant in disposition, but because of his shy disposition and age comes out of his lair much less often. Pippin is in evidence at ALL times. Both of the cats are ginormous tubcats, with swingy stomachs and fur like bunnies. Because of their size and fatness they make the cutest cat loaves ever. When they are "loafed up" you can't see any feet at all. 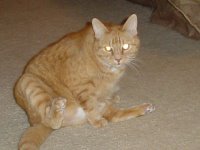 Although they look idle, they apparently have a separate and more active life at night. Last night they fulfilled a burning desire to sample my Tension Tamer tea. They got into the cupboard, opened the box, and ate up most of a bag. No wonder Pippin was in such a pleasant mood this morning!
Posted by Unknown at 10:45 AM

I found this site using [url=http://google.com]google.com[/url] And i want to thank you for your work. You have done really very good site. Great work, great site! Thank you!