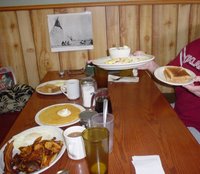 It's football time, and a good time is being had by all - if your team happens to be Oregon. So far the old Twinsburg cheer applies "We Got No De-Fense"!

The delicious breakfasts at left courtesy of the Apple Orchard, our neighborhood diner. All good all the time. There was uproar and confusion in the kitchen today - key kitchen workers were out, but it didn't effect the food. We did peek into the kitchen on our way out, though - all the faces back there looked desperate - like they had managed to get through breakfast but were just realizing that the lunch rush would be hitting in a minute.

Next up entertainment for the morning was a visit to the dog park. Rita and I took Skippy and Roxy out for some wild fun 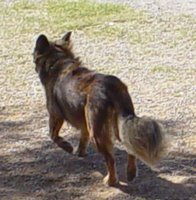 . Of course the only pictures I have of Roxy are of 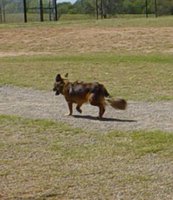 her backside, running away. I swear I have not peeled the face right off of her. I'm just showing off her beautiful tail. Skippy is a pound puppy, originally billed as being a Cocker Spaniel/ Beagle cross, which Rita picked out for herself. Nancy thought the cross would produce a dog who would run away howling. He's turned out to be a very clever dog, and has revealed what appears to be a big streak of Border Collie. The dog park was big fun, with lots of butt-sniffing for all. Our experience improved 100% once we scored the bench in the shade. One adolescent German Shepherd thought he might like to bully Skippy, but Skippy set him straight. Every once in a while he'd come back, but 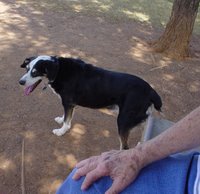 the response was still the same, shoving teeth, and a short growl, so he eventually gave up. He wasn't getting anywhere with Skippy, and the other dogs were showing their disapproval at his gauche behavior.

Well, back to my game (boohoo). At least Virginia Tech and Ohio State are still doing well. The most fun thing about the OU game is going to be watching Bobby Stoops get hotter and hotter on the sidelines!