I currently live on Cape Cod, but I was born in Ohio, moved around the south and southern plains for a while, then lived in Oklahoma City for thirty-four years. I was not my ideal place for me to live; its politics are miles from my liberal Democratic roots, and my marriage was not recognized there until the issue was forced by a Supreme Court decision. Still, there is much to love out there in the southern plains, and I miss some things a lot. I still have family there, for one thing. 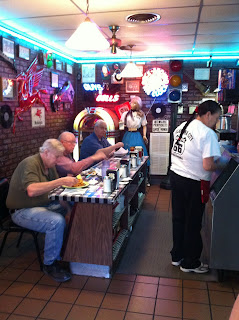 I was listening today to a podcast by some people I like and respect - chefs and friends of chefs who live in Los Angeles. People who might go to (really) a special event consisting of an entire tasting menu of Okonomiyaki (Japanese cabbage pancakes) because they are interested in the chef. I'm not mentioning the podcast because I like it and the authors. I will listen again, and it's my own fault because the theme song gives away the hipness of their tastes: a drum solo like the one prominently featured in "Birdman" last year. So hip they can't see over their own pelvises (Thank you Douglas Adams). The topic today was chain restaurants, and a remark was made that it was a revelation when traveling across America that there was nothing they could eat. That went all over me, to use the vernacular of flyover country. Granted the middle of the country is not as screamingly chic as either coast, but there is no excuse for that attitude. For one (small) thing, since moving to Massachusetts I find that it's hard to come up with some of the (food) necessities of life: decent tortillas, biscuits and gravy, fried chicken, soul food, Mexican pastries, south Asian groceries, breakfast cut pork chops, grits, properly cooked hash browns or fried potatoes, chilis, properly cooked barbecue,  you get the picture. I have also dined at many fine restaurants and smaller places in the middle of the country where the food was perfectly cooked with skill and love. If the only place they went to eat was Denny's it's not the fault of the towns they passed through; it was their own fault.

I don't live there anymore, but it offended me to think that one could cut down a whole part of the country based on whether or not they were able to provide for the taste buds of a spoiled and lazy picky eater.