It's a Good Thing She's Pretty 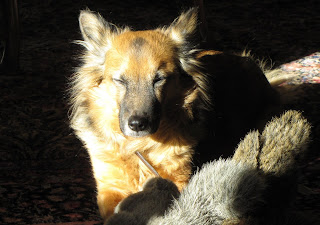 ...because she is The Worst Dog Ever. As an act of protest when we left her at home while we went to Evil WalMart the Evil Wild Dog of the Prairie ATE A BOOK. Well, not the whole book. She ate the spine off of Open, the autobiography of Andre Agassi which Shana had been reading. No dog I have ever had has ever eaten a book. If Roxy was hoping I'd blame it on Skippy she's got another think coming because Skippy had almost no teeth. It was an ordinary hardback with no bacon slipped under the binding. Since I always have a large number of books about the place I am rather alarmed. Later in the day I pulled her happy butt out from under my bathroom sink where she was apparently searching for some suitable patent medicine for some undiagnosed condition. This morning she pulled an assortment of things from the surface of my craft desk. Of course it was only things of burning interest to most dogs: three wool pillow covers from Greece, a cookbook by Guy Fieri, and three vintage brooches. It is also clear that she had her head in my knitting bag, although the lack of alpaca therein must have been a grave disappointment. She didn't pull anything out of there. This time.
Posted by Unknown at 10:48 AM

She has to be punishing you for the weather, since she cannot go and roam in it, and you can. Maybe she has seen too many naughty dogs on The Dog Whisperer? Naughty little evil dog of the Prairies.