Take Me to the Promiseland 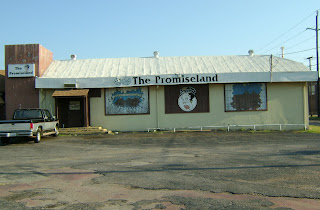 I did not know this before, but The Promiseland is in Wichita Falls Texas! Apparently it is not the land of milk and honey I thought, but instead it's a somewhat seedy looking bar in an out of the way part of Wichita Falls. It's conveniently located just a ways down the street from the MPEC, where all the big events happen. If I had known the Promiseland was so easy to find and located so close to the center of Wichita Falls I would have gone there long ago.
I'm back in town after another century ride at the Hotter n Hell Hundred, a bit tired, sunburned, and a little sore in various body parts. Most body parts, if the truth be told. I think just about every distance ride offered was represented in our group, and (I hope) everyone had a good time. I know I did. I had signed up for 100 miles, but 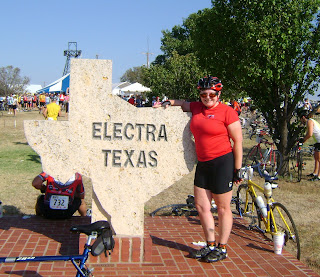 until the day before the ride I had not quite committed to the distance. The 100K is a good ride, and a distance I knew I could cover without killing myself. The weather turned out to be perfect and I have a new beautiful bicycle, so I stepped up and did the century. Helen was riding at about the same pace I was so we were able to meet up at the last few rest stops to encourage each other. She rode in with me to complete her first century and we were both thrilled to have finished and relieved it was over. We also could not wait to cool off in the spray from an open hydrant and get a corn dog. My goal was to finish before 4:30, which extremely modest goal I achieved. Because the weather was so good and I had done a century ride before I was able to relax and enjoy the ride much more than I had the first time. On a tough ride I am so fixed on just 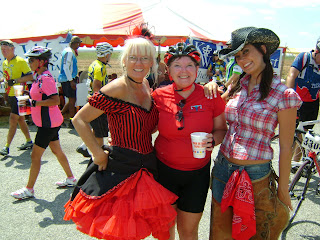 maintaining forward motion I tend not to see much beyond my front wheel.
This time I enjoyed the rest stops more, although I did not stay long at any of them. I had my (sweaty and dirty) picture taken at several and visited all but one. The last two stops were just quick roadside pauses for me as I was ready to finish up. Various organizations sponsor the stops and they each have a different theme with music, costumes, and a 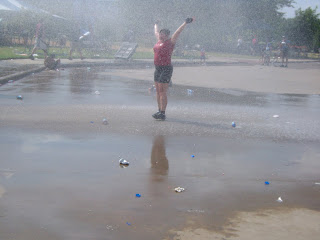 bunch of great volunteers. There were a record 14,200 riders, and a lot of people took advantage of the unusually good weather to go for the century, so rest stops were crazy busy but the 3,500 wonderful volunteers cheered us on all day. We also had loads of encouragement from residents who sat out (sometimes all afternoon) to enjoy the spectacle and wave at us. Because of the large crowds of riders that persisted far into the course there were a lot of accidents, but apparently no serious injuries beyond the usual road rash, broken wrists, and broken collarbones. The mild weather meant only a minimum of heat related problems needed treating, mostly new riders who were not prepared for long distances. Fortunately no one in our group was injured or involved in any mechanical mishaps.
We have already reserved our rooms for next year, and as we did last year, we are resolved to ride later into this year and start up earlier next year to be in better shape for an even better ride. My personal goal for next year is to ride the 100K ride at every event (except the Streak, where I am sure the 100K would be the death of me), and to get in at the Hotter n Hell by 4:00pm.
Posted by Unknown at 3:12 PM