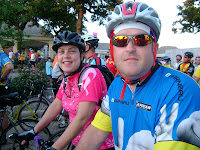 I've got an odd combination of too much going on which eats up my blogging time and nothing really new to say. Cycling continues unabated, with ever more miles every week, except for last week when I took the week off to rest my aching legs. That may have been a mistake, but I'll fix it this week. I still can't commit to a distance for Hotter 'N Hell which is only 11 days away. Spin Your Wheels this year featured high temperatures and a continuous heavy crosswind which tried our endurance. Lucky for my fellow participants I only took a few pictures at the start of the ride when everyone looked good. Trust me, no 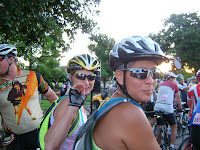 one looked this good afterwards. In addition to the traditional sweat and salt all over, the wind had added new features to our appearance. At about the 30 mile mark someone had chosen that morning to plow, so we received a nice gritty layer of dirt to stick on our sweat. I had foolishly forgotten to put on sunblock, so I fried my arms. Because of the heat I had tied a bandana full of ice on my neck, so not much sunburn there. Because the wind was intense I had my head down, sparing my face from the worst of the sun. 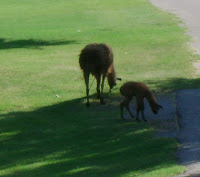 That ride went through El Reno via old Route 66 with no time to stop in town. Yesterday Shana joined Diane and Sharon and I for a ride out to El Reno on the back roads, which we far prefer. The wind was even worse, although temperatures were a little better. We had a lot of fun, but it was a very strenuous ride. We stopped a few times to break it up. The llamas I see at The Carpenter's House (some kind of non-denominational church) on the way into town had a baby, so we had to stop a minute to gawk at it. So cute. I wanted to sneak up a bit closer, but I thought Momma might take a dim view of it. 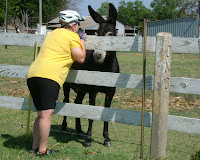 Farther down the road some donkeys caught Shana's eye. These were the same ones that got Diane's full attention on an earlier ride. This ride she had no time for them as she was trying to get in a boatload of miles by riding on and circling back to taunt us. Shana stopped to enjoy them, even giving one a kiss on the nose. Good thing they are a friendly pair.


In knitting news I'm still working on the Canal du Midi socks, and a secret project that cannot be revealed until after a certain baby shower. The Float Stole is calling me sadly from the bottom of my knitting box, but it will just have to wait. Deadline for the baby project is a full month sooner than I had expected, so I have to concentrate on that.
Posted by Unknown at 7:37 PM