his weekend's cycling event, aside from a very fast ride to El Reno Satruday morning, was "Schelgel Fest": a promotional event hosted by Schelgel Bicycles, a high end bike store in downtown Oklahoma City. Hamburgers and hot dogs were served, free minor repairs and a big sale brought in a good crowd. The timing for a promo event is perfect - the week before Hotter 'N Hell, and a chance to bring in some extra traffic to move the end of season clearance and catch more of the stock up business for participants getting ready to go. At the Hotter 'N Hell there is a big expo where loads of bike 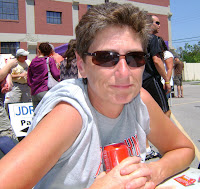 stores bring in their new cool stuff and their old end of season stuff, so if Schlegel wants to catch any of us with disposable bike $$$ in our pockets this is the time. I spent quite a bit of time poring over their stock and examining their assortment of women-specific complete road bikes. There were a couple with eye catching paint jobs, but nothing that was really any better than the bike I have in terms of frame composition or components. Schlegel had a great selection of cruisers and several nice men's road bikes, but not a lot in high end women's road bikes. I can ride a man's bike if the frame is small enough, but I have a women's bike in mind. The shorter length from seat to handlebar and the shorter reach on the brake and shift levers makes a big difference in comfort. Because I put more emphasis on distance than speed those features are more important to me. I had a particular interest in shoes but did not try any on - I think next year I may indulge in a pair - and I didn't see anything I coveted. I also was thinking of a new helmet - I have reached the conclusion that my current "hat" looks like a big blue tortoise is sitting on my head. I plan to check helmets out while I am in Texas, and I did not see anything here that would look good with Big Blue. I looked at a few seats, because I am currently not completely satisfied by the one I have. I picked up a couple of electrolyte items and went on home. Just as well I did not find a helmet to suit my taste. After several months of hinting around Shana stunned my by telling me she wanted to

give me her Trek Madone. It's a beautiful all carbon Dura Ace bike, women's geometry and components. I must admit I have had HUGE bike envy ever since she bought it, but not enough to shell out the dough for a new ride for myself. Shana has not been riding nearly as much or as far as I have this year; she's going to finish the season with Big Blue and evaluate what she wants to ride next spring. I spent a happy hour in the garage raising the seat on the Madone and tuning up the fit, swapping out the seat bags (I carry a lot more gear along than Shana does) and transferring my computer over to My New Bike. I'll be looking for a red helmet in Texas to match my new ride. Tomorrow I'll take it out for a spin around the lake and adjust Big Blue to fit Shana.

Shana's cousin Glenda was in town to visit this weekend. Glenda took Rita all around town, and we all got together for a cookout with Uncle Buddy. One new feature this time is that I was not the only one taking pictures. Buddy and I were having "dueling cameras", Glenda and James also brought theirs. A good weekend and too soon over.
Posted by Unknown at 9:06 PM