Where Did all the Egrets Go? 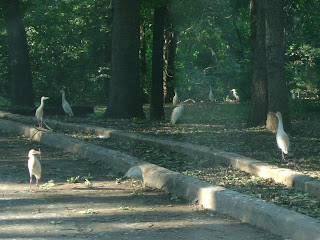 When I first moved to Bethany I lived right around the corner from an egret rookery. The rookery had been there for many years, but as time passed and more people lived in the immediate area the egrets became less of an interesting sight and more of a nuisance. One year a serious effort was made to dislodge them so that the grocery store next door to the rookery could expand. Noise canons and scare eyes were deployed. Some overstimulated hunters thought shooting them was a good idea, until they were told that what was roosting there was not only the common Cattle Egret but also the Great Egret which is the symbol of the Audubon Society and a few other species that were not legal to shoot - leaving aside the little problem of discharge of firearms within city limits. Yahoos. After a couple of years of the combined strategies worked and the birds were gone. Only to appear about a mile south. I drove through the 10th & Council area and here they are apparently thriving. 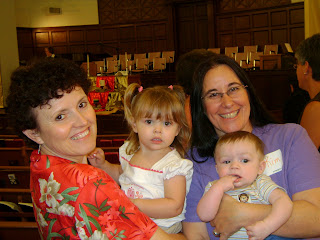 Miss Vivian came to stay with me this weekend. She is apparently studying at the Ozzie Osborn school of diction, but gets her point across by gestures and steadily increasing volume. She was an angel at church Sunday, though. I can tell you I was relieved! She was happy to meet another baby ( Kim & Susi's adorable nephew) and I was happy to hand her over for a minute, as she was sticking to me like a barnacle on a rock.
Posted by Unknown at 1:29 PM