At the Grand Canyon

Late Saturday afternoon we arrived at the canyon and set up our campsite, finishing up the tent erection in the dark. We roasted hot dogs over the fire, and settled down for the night. The exertion at the altitude of the North Rim made my heart pound and I was hyperventilating a bit, so my brain thought I might be running away from wolves, so I slept badly. I wasn't worried about it - I seldom sleep badly and on vacation I can always take a nap. It's worth noting that because we had to reschedule our vacation we got the last available site at the campground. We camped at site 57, which I did not thing would be a good spot. As it turned out it easily accomodated our large tent (not all of the sites will), and while I had thought being near the toilet would be a drawback it turned out great. The sites on either side of the nearest facility (located right behind out site) are reserved for law enforcement emergencies, which meant we had no one behind us all week and instead of having to go the long way around to the bathroom to avoid going through someone's campsite (something like walking through someone's house in terms of manners) we could just go straight through.

We fixed a big campsite breakfast, then off to the Grand Canyon Lodge we went, to give Shana her first view of the Grand Canyon. From the park gate to the door of the Lodge you don't see the canyon until you walk across the lobby and go downstairs. The downstairs lounge has beautiful 180 degree floor to ceiling windows and is a great place for your first look at the canyon - so dramatic

and so worth planning for Shana's first view to be this one! We hung around the lodge for a bit, then went out for a walk to Bright Angel Point. This was an ideal first walk as the entire .75 mile is paved, and you are rewarded at the end with a lovely panoramic view. On the down side, it's also one of the few places on the North Rim where you can get any cell phone reception, so lots of people were taking advantage of it.
After having lunch at the lodge we went back to the campsite to nap. Shana went into the tent and I took over her amazing lounge chair with my book to nap. Just as I was settling down our neighbors started up an afternoon musicale. He was noodling around with his guitar, and thereby attracted the attention of another camper with a fiddle, who invited the guy with a banjo...Ultimately they had two fiddles, a dulcimer, two guitars, a banjo and a harp. They played until dark. If I had not been so tired I would have enjoyed them very much because they really did sound good. As is was I was mentally cursing them and calling them the Celtic Pretension Society and wishing them anywhere else. We ended up going back to the lodge to watch the sunset and enjoy a good beer in (relative) quiet. I was too tired for dinner, and went right to bed when we returned to camp. 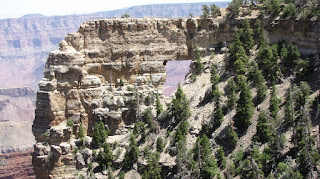 Refreshed by a good night's sleep the next day was spent driving to various overlooks and taking short walks. As far as I can tell there is no spot which is not gorgeous. I took a lot of pictures, and while I doubt that it's possible to take an original photo at the Grand Canyon it's really hard to take a bad one. Click on any of these to enlarge, or just hop on over to my Flickr Gallery for a slide show.
Posted by Unknown at 1:08 PM