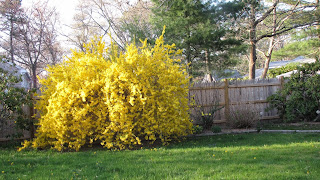 Winter has finally and more or less completely given up its grip. I think the garden is behind where it was last year - I'll know for sure when I compare. In terms of size it's bigger. The bed bordering the front walk is new, and I've started on a perennial border along the back fences behind the veggie garden. 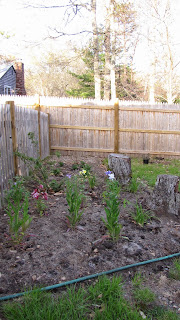 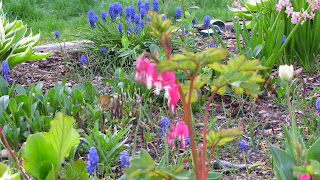 Winter losses - looks like two small lavender gone. My fleabane and sweet william have not come back (yet), and the mountain bluet looked small and weak before something bit it off at the ground. I have only half a dozen tulips, and the single one bud that was ready to open was also bitten off. Tomorrow I am purchasing some Repels-all to pour under the shed and dribble around some of the more attractive plants. I would like to have parsley for the table, not to fatten up groundhogs or other marauders. There was some kind of little creature in the yard yesterday - probably a chipmunk - Mitzi is interested but unless it comes inside the fence she won't get a chance. The cat behind us does come into the yard but I think he is only really interested in birds. I lost one veronica from the new front bed, but everything else made it through the winter there, probably because everything, including the hydrangeas, was completely and totally buried under snow up to my shoulders for two months.

Successes - my "tall veronica" which is really something else but was labeled that way doubled its number of stalks from last year. The Liatris is so enthusiastic I will have to start pulling some of it out. I will use some in other places but I will have more than I need. I thought I had moved my baptisia to the front bed but apparently I did not get all the root because it is coming up well in both places. I thought I was taking a chance because it does not like to be moved, but doubled is good. It gets  more sun in the front yard, so maybe it will bloom better there. My peony is much bigger, and the cosmos has reseeded. I don't know about the four-o-clocks; they come up much later. It's hard to believe they would have given up. The shrub border looks (a little) more like bushes and less like a row of sticks now, but is still not big enough to block my neighbor's piles of stuff. His son had a serious motorcycle accident earlier this year, so I doubt he will be moving along this summer. This means the tarp covered pile of his belongings will have to stay. 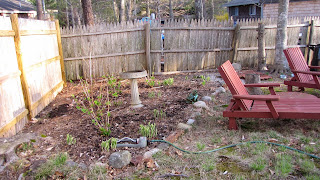 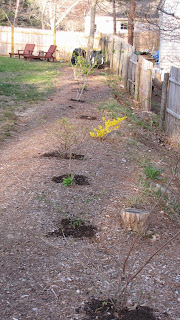 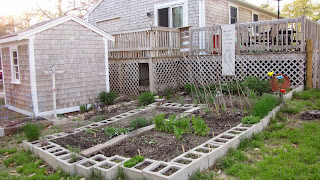 These are really boring photos unless you just like looking at little stumps. The next round of garden pictures will be much better, and in June I swear I will make a little video tour of the whole thing looking wonderful, so that you get the full effect. 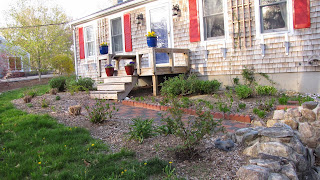 Posted by Cinderellen at 7:07 PM

How much do I LOVE those red shutters!!! Tried "strips" of seeds for the first time this year (strips of paper pre-impregnated with seeds) and they worked pretty well. Not sure they're worth the extra coin, though.