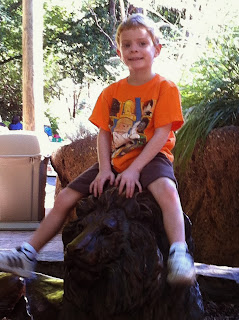 I've been a bad blogger lately. It's not that I don't have an online presence - there are (nearly) daily posts for Twitter and Facebook, and frequent pictures posted to Instagram and Pinterest...spread too thin, maybe.

Once my September company went home I started preparing for my trip to Atlanta to see my oldest daughter and her cutie pie of a son. He's my favorite grandson (my only!). Jennifer bought a house this summer so instead of them coming up to see me I went there to see the new place. It's adorable and cozy, just what I had hoped it would be. She is justifiably house proud and I loved staying with her. I had a great time visiting them; this time I had time to see some of the sights of Atlanta, beginning with the airport.  I've gone through Atlanta quite a bit over the years. It's just about my favorite airport for a layover because there is plenty to do and a lot going on. This is because of its size, which made it less fun to fly to than through for me. I got turned around on my way out and found myself going up and down random escalators while poor Jennifer had to drive around hoping I would eventually emerge. Next time will be better! 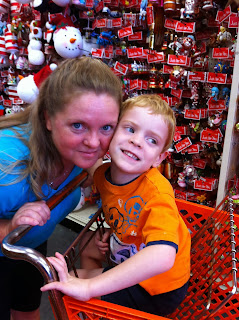 We hit the zoo (Pandas!), the Aquarium (Whale Shark!), a cool bowling alley, and Garden Ridge while I was there, and several nice restaurants. I know Garden Ridge does not seem to belong in the list of exciting places to visit, but it was one of my favorite places to shop for 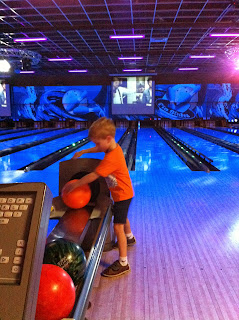 junk in Oklahoma City, and there is not one closer to me now than Virginia. We picked up some kitchen gadgets and Halloween decor, and gawked at what had to be the least attractive Christmas trees I have ever seen. They came in a big variety of colors including Boise State blue, orange and black. I hope I do not see one in someone's house any time soon. Or ever. You'd think that I would not need a thing in the kitchen but for some reason I have not owned a ladle for years. I can't even remember what my last one looked like. After bowling we played laser tag, a first for me. Big fun.

We were having so much fun that I did not double check my departure times and was still lounging around Cracker Barrel when my flight back to Boston left. No big harm done except to my disposition; I was able to get the next flight out and was home only a little later than scheduled. I had yesterday to try to recover from my traveler's cold and today it's back to work for me. Now that I am looking at the pictures it looks like we did everything the same day because Logan is dressed in an orange shirt in all of these pictures. I must point out that these pictures were taken on different days and the shirt is a coincidence! He did wash and put on clean clothes every day. So did I.


I am thinking about my Life List these days: things I want to do while I am still healthy enough to enjoy active activities and before the 1% sucks up all of my disposable income. One thing I would like to do is to visit all of the National Parks. Of the 59 National Parks I have visited 11. Of course there are National Monuments, Seashores, Preserves, Refuges and other sites I want to visit, and have visited.