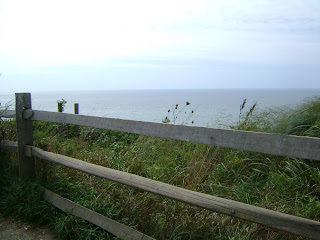 It's fall here, and with the change of seasons comes a change in life on the Cape. On the day after Labor Day it was apparent that summer was over. Traffic has dropped off, not to winter levels, but noticeably. The kids have gone back to school and most of the vacationers have gone home. The summer workers are nearly all leaving, and the Summer People will mostly leave at the end of October, with the latest few leaving around Thanksgiving. The light is already different, and next week will see a few low temperatures below 50°. Our local flock of wild turkeys has been very much in evidence. One big Tom was sitting on our deck railing Friday morning, much to Shana's surprise. The Major Retailer where I work will be closing at 6:00 every night now, although I will still work a few late nights (until 11:30 pm!) here and there to reset floor displays when our customers are out of the building.

Today is Shana's birthday, and thanks to the reduction in tourist population we were able to indulge in a  day trip to Martha's Vineyard yesterday. We took the Ferry out of Falmouth to Oak Bluffs because we were not taking a car across. Roxy stayed with "Aunt Lisa" for the day. Shana and I rented mopeds and spent the afternoon tooling around the island. Only a week earlier I would have hesitated because in high season it's a dangerous thing to do, but the traffic this week is largely locals. We visited Acquinnah to see the cliffs of Gay Head and the Acquinnah lighthouse. The cliffs are as beautiful as advertised and the ride was lovely, with intermittent views of the sea and intriguing glimpses of cottages among the dunes. We could not help but fantasize about how it would be to live there! As we approached the lighthouse we heard the unmistakable sounds of Native American song - this weekend Acquinnah was hosting the Wampanoag powwow. Next time we visit Martha's Vineyard we will bring a car and visit some of the other lighthouses and beaches. Philbin Beach is especially lovely, but it is private and we may not be able to go there.


Today we went to the beautiful Coonamessett Inn for a champagne brunch for Shana's birthday meal. It's a pretty place, if a little "grandma", but the food is good and it was a place where Shana often went with her mother. We had a wonderful selection of delicious dishes and some very helpful advice from our Jamaican waiter on the preparation of callaloo. This my favorite cooked green, and thanks to a large Jamaican population here in the summer it is available at a local organic farm. I'm eager to try his recipe.

I envy you this visit!!! Martha's Vineyard has long-resided on my "gotta see" list. Sounds like you had a wonderful day!!!!

You have a lovely way of capturing the spirit of that area. Thanks!