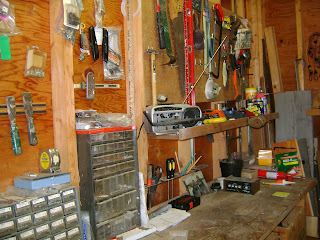 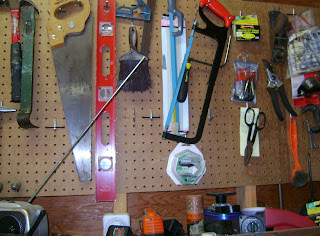 I was digging around my father-in-law's garage yesterday looking for duplicate gardening tools and checking out what he had that I may be able to borrow for my projects instead of haring off to the big box for a tool I will use twice (yay miter box and saw, just what I will need to frame my bedroom mirror!) and got to thinking about what I like so much about old guys' workbenches. It's really a nostalgic thing. Both of my grandfathers were handy, and both had workbenches that saw a lot of use. They both had collection of odd screws and fasteners of various kinds, power tools, several different hammers, loads of screwdrivers. This interesting display was separate from the expected complement of auto repair tools. My teeny little toolbox in no way suggests the selection a man of an earlier generation was expected to have, although I am constitutionally unable to throw out the odd bits of hardware that cross my path. 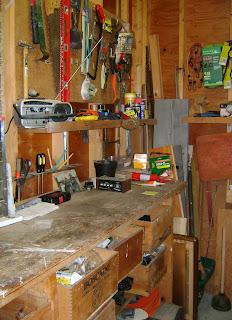 I love the oily smell and the apparently random displays of oddments on the inevitable pegboard. You can always find a bit of string, a paint rag, or an odd sized wrench. There are always surprising things there that get your creative juices flowing and inspire thoughts of interesting projects. My father had a workbench, built as a matter of course when the garage was added to my childhood home. Although he had tools, his workbench never achieved the patina of my grandfathers' benches. He was not really that kind of man. My mother used the tools much more often - she has the handy gene and the skills to express it were learned at her father's side. A well used workbench shows the character of the person using it: thrifty or extravagant, workhorse or showboat,  artistic or minimalist. Looking around Bruce's workbench brings to mind the man he was before Alzheimer's began to steal so much from him and us. His tools are all there arranged as he liked them, but he does not use them anymore. None of the men I knew as a child still survive, but the memory of their work and work spaces does.

Tool boxes and benches fascinate me, too!!!

Funny story: One day when I was living in my other apt., the handyman was by to fix stuff and told his helper to go down to the truck and get him a screwdriver. I interjected, "Flat head or Phillips? Small, medium or large?" He laughed and said, "I'm sorry but I never would have picked you as the type to have tools!" as I stood there in my little black dress and explained, "My mother told me to never depend on that a man will always be around to fix things."

This is a wonderful post. Lots of memories in this one. My dad was a contractor whom I did sub contract work for from 10 years of age on through the teens. DH has a bench in the garage, but it's not used. He has fixed computers on it. :)

Appreciate your writing/reflecting on the meaning of this kind of space. Often the provence of the man in a family, it's good to hear about women approaching the bench.