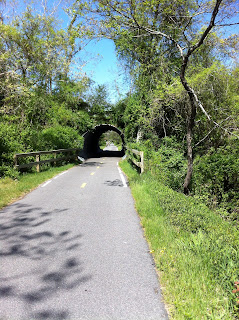 Yesterday Shana and I were both free all day so we planned to take a ride on the Cape Cod Rail Trail. We had planned to meet up with some friends and ride together, but they were unable to ride with us. Sue did want to meet up at Barb's Bike Shop at the trailhead for our input on road bikes, which we were happy to do - what's not to like? Barb's is mainly a bike rental shop with a decent selection of hybrids and very little in the way of road bikes, but they did have a couple of good candidates at reasonable prices and we like to be around bike stores. Sue rode some bikes around the parking lot and got familiar with the feel and pricing of road bikes. I wandered around checking out the old used bikes. One of them caught my eye in a big way - a Huffy Sea Pines 3 speed cruiser in good condition. I've been wanting a little commuter bike since my Giant hybrid stayed in Oklahoma City and this really fit the description. It was super cute and not only retro but actually 1970's vintage and for a pretty good price. After I rode it all over the parking lot begging Shana took pity on my infatuation and agreed that I should have it. I could not get it in the car yesterday, but I went to pick it up today. Too bad it is a drizzly miserable day or I would have taken it down the trail for a little spin. 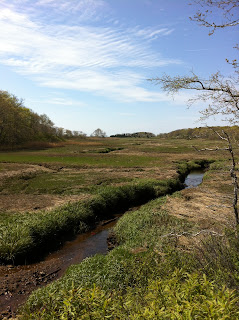 After Sue left the shop to think over her bike situation and attend a concert I aired up our tires and Shana and I headed out for a ride down the Cape Cod Rail Trail. We were having a nice ride until Shana came up flat on the rear tire about four miles out. Of course it was the back; it's always the back. This is where our lack of preparation came to light. I had a CO2 cartridge but it was empty. We both had inflators to use with a cartridge, but they are useless without one. I had tire levers but no tube; Shana had a tube but no levers. Neither or us had wipes to clean our hands after changing a tire or a pump to inflate a tire, although before we left the parking lot I actually had my frame pump in my hands but decided not to take it along. Shana left her phone in the car. I also decided not to take my pedometer along because it does not record anything on a bike. I sent Shana back down the trail on my bike after adjusting the seat for her (only one of us had a multi tool in the bike bag) to a bike shop we passed on the way out to get cartridges and I started walking back. I did not know what time it was, but I thought that if the shop was not open I would be able to walk back in my bike shoes but Shana would not. She's having some back issues and bike shoes are not made for comfortable walking. I had walked about a mile and a half back with only one of dozens of passing cyclists offering to help and without my pedometer (!) when Shana returned. The shop did not have the threaded cartridges we needed for our inflators so she had purchased two unthreaded cartridges and an inflator. While she was demonstrating how to use it she let the CO2 out of one. I inflated the tire with the other and thereby discovered that the valve was bad. All the gas ran out of it and we were back where we started. I sent Shana back down the trail and set to changing out the tube. I removed the wheel and this is where my luck changed. I was wrestling with the very tough and stiff Continental tires I had installed on Shana's bike to counteract her tendency to run over all kinds of things when a helpful male cyclist with strong hands stopped and replaced the tube for me. Just as we were finishing up  a local resident came out with a floor pump and aired me up! Yay! I rode on back, met up with Shana, and we went on home. We were both kind of tired, and my ankles are sore today from walking in my bike shoes, but otherwise we lived through the incident without lasting harm and still got to enjoy being outdoors on a really nice day. I am really glad we were not farther out when it happened!

Today when I picked up my cruiser I purchased two tubes, two fresh cartridges, and a multi tool so we will each have all the equipment we need to be out on the road bikes. I'll need a bag and tools for my cruiser (and a basket for maximum cuteness!) but that will have to wait for another day.

I love your new bike!!! Color me green with envy even though I can't ride anymore!!! Love the photos. I feel Shana's pain -- back pain is worse than labor pain. (FYI: The best back doctor in the world is in Cleveland @ University Hospital).