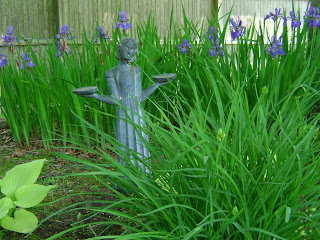 This week my Siberian iris is in full bloom. While the flowers are not large there are a lot of them and because they extend almost the length of the bed  and all one color the display is very effective. 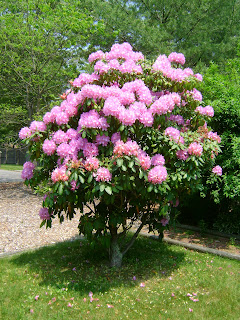 The rhododendrons are in full bloom all over the Cape, bringing to a close the season for the large flowering shrubs. I have two big pink and two dwarf white. Driving around I see lots of beauties I'd like to add to my garden, but I can hardly complain when my two pink ones are ten or twelve feet tall and covered with blooms! I'm pretty well resolved to run a border of rosa rugosa on the south side of the property. This is a shrub which spreads readily (too readily, truth be told), has scented flowers, does not require special care, and will not grow so tall as to obstruct the view of traffic from the driveway. It's not quite a native plant, but does grown wild here on the beach. Animals like the attractive red hips, and the crazy spiny branches are excellent shelter for small birds. It will allow pruning when needed without being picky about how it should be cut. There is a steep slope between us and the neighbor's lot; I think this would be a good plant to stabilize the slope. Currently we have a fence here, but it is not in a good state of repair. When it won't stand up anymore I would not be unhappy to have the lot bordered by a rugosa hedge instead of a fence. Since we sit a little higher than the neighboring property the fence is really not providing a great deal of privacy and it's not pretty. I'll dig up some starts of rosa rugosa from the Dobberteen garden the next time I'm over there keeping Bruce company and we'll be up and running with them. 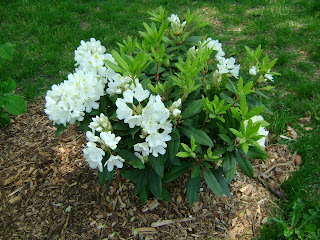 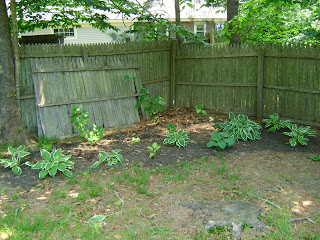 The shady back corner is now completely planted as a hydrangea and hosta garden. It looks kind of wimpy and empty now because I have planted with mature sizes in mind, but I know how it will look when it's mature. I saw a beautiful example of this combination in Falmouth and liked it well enough to duplicate the combination. All it needs now is time (lots of time), some judicious pruning of some of the overhanging trees and maybe a focal point. The plot I admired in Falmouth has a big rock as a focal point; if I don't go with that Inace had a little fiberglass rowboat Shana wants to feature as a planter somewhere in the yard. This may be the spot we choose. The only drawback to that is that it will be way out of proportion for a couple of years. I may decide to fit Tiny Toes (the boat's name) into the new phase of the sunny garden behind the shed to be set up next spring. Either way I want a bench back there near the hosta garden which means I am going to have to move the composter. No one wants to sit and relax next to the composter. Shana has a fear that it will be smelly and she will see maggots. So far I don't smell anything and have not seen the much feared maggots, but I agree it is not a sight to inspire meditation except for the most ardent gardener.


We had a BBQ here on Memorial Day and I was gratified to receive a lot of positive comments on my yard. Very motivating!
Posted by Unknown at 2:23 PM

Your garden is well on the way to being the wonderful haven you envisioned.

Funny thing about composters, but you probably know this.. If you don't compost anything but greens-garden/vegetable trims - with browns -dead plant stuff- there are no flies or smells. DH finally moved the two we have out of the raised bed. He took a class in composting, and found out they are made for the shade. They made good compost for me over the years, but now he's smitten with gardening. Yay!