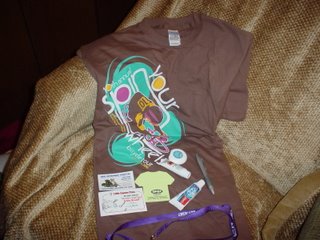 The good news is pictures. The bad news is apparently also pictures. I got so exasperated at the lack of picture loading activity on Blogger that I have not take many lately.

The picture of apparently unrelated items is the contents of the "goodie bag" from Spin Your Wheels. The take depends on the event sponsors - this particular one included dental floss, toothpaste, a magnet and leash from our vet clinic, post-its, sunblock and a pen. The T-shirt for this one was cool, and I've seen them about town, and at the Hotter N Hell at Wichita Falls this weekend.

Shana and I drove down with everything we needed (unlike one of our friends who forgot her front wheel). Our room was already paid for and we proceeded without incident to the Expo, where we proceeded to sign in, get our numbers, and buy T-shirts (the freebie is not all that attractive. Comparison photos will appear on a subsequent entry. ) Dinner and an early night. So far so good. Next morning we have our breakfast on the walk in front of our rooms with our friends, load up the bikes, and head for the event.

As we arrived the Curse of Texas took effect. As I was unloading Shana's bike from the car I realized I had forgotten my gloves - and then realized that my helmet was also in the room. We had to go back and get them. And hurry! So we jumped in the car and as we proceeded down the street we heard a thump. From a glimpse of bicycle flying Shana though we had hit a cyclist (they were everywhere). Nope. I had failed to secure her bike on the car. It hit the street on the derailler side, and a cursory examination revealed that it would be unreadable until repairs could be performed. We picked it up off the ground, strapped it back on the car and went on to pick up the rest of our gear. Back to the hotel, back to the event, I get my bike off the car, with the plan that Shana will find a mechanic and still have time to fit in a 25 mile ride. A quick check of our equipment and we realize that Shana does not have her phone, which was probably on the car when we drove back to the hotel. I gave her my phone, and hustled to the start line. The ride started with the 100 mile riders, then 100K, then 50 mile, etc. I get to about the back side of the 50's before it's really more crowded than I like for a start, so I stop there, Our group is a 100 yards ahead, but as I was the only one doing the 100K I didn't worry about it (and really didn't need to).

I chatted with a man from Missouri until the ride started and we kept each other company for the first 200 yards or so, then we lost track of each other and I proceeded alone. At the first rest stop I applied sunblock from the first aid tent (I'd forgotten mine, of course) and as I was about to leave I met up with a couple of members of our group, who had waited to see me so they could tell Shana I got off all right. Our rides split about 100 yards from there, and I proceeded for the rest of my ride alone. There were almost always other cyclists in sight, some of the same ones I saw several times, on the road and at the stops. It was getting hotter. At 11:00 they closed "Hell's Gate", the point where a rider planning to ride the 100 miles must reach by 12:30 pm. The temperature and humidity were reaching dangerous levels, so the cyclists who got there later had to go an alternate (75 mile) route.

Warning: following two paragraphs may only be interesting to cyclists:

Most rides seem to start with a number of cyclists whose maintenance or road trip did not get their bike to the event in good shape. Those riders usually start dropping out within the first mile or two. They either change their tube, fix their problem, or call it a day and take the "sag wagon" in. This one was no different. By the second stop there was a rider in the medical tent waiting for an ambulance. By the third stop I was seeing a new rash of riders on the side of the road with tire problems and other issues. The third stop had run out of Powerade and Pickle Juice. The fourth stop had run out of ice (by this time I was wrapping a gob of ice in my bandana and typing it around my neck.) I waited for the ice to arrive. More riders were at the side of the road, and I was beginning to see the sag wagons pass. Instead of the pickup trucks and vans I usually see on organized rides they had pickup trucks (and in one case apparently a limo) pulling flatbed trailers. The fifth stop had run out of water earlier, but had received a fresh supply. They also had Powerade. I filled both bottles with half water and half Powerade. They also had salty snacks and Pickle juice. By this time no one had to come around offering icy wet paper towels. Everyone wanted them to wipe down and drape over their necks and heads. The routine I have worked out for long rides involves having half and half water and Powerade to start, and one glass of water and one of Powerade and one of water plus half a banana at every stop. When the third stop did not have any Powerade or Gatorade it threw me off. I compensated by having a glass of Pickle Juice and one of Powerade plus salty snacks and a banana. I was afraid of running out of salt and slipping into hyponatremia. I ran out of steam a mile before the sixth stop and pulled over for a rest. The route followed the turnpike on that leg, and there was a roadside rest with SHADE. Lots of us sat and visited in the shade for twenty minutes or so, watching the sag wagons go by. By this

time they were passing fairly frequently absolutely crammed with riders who could not continue. Just another mile down the road was a rest stop with a nice big "shower" so we could all stand in the cool water and drop our body temperatures. The next stop only 5 miles out, at least one mile of which I was fighting painful leg cramps that I swear I would not have had if there had been Powerade at all the previous stops, then two miles to the finish. I was chanting "two more miles" for at least the last mile, I was so proud to finish.

Turns out the heat was record breaking, The bank temperature near the finish was reading 110, and out on the course in the 20 mile per hour wind right on the road it would have been higher. Lots of people were treated for hear exhaustion, heat stroke, hyponatremia, broken collarbones, heat rashes, etc. Some of my friends actually saw a tire on a bike at a rest area explode! At the beginning of the ride when you went to a rest stop all the bikes were laid out carefully or leaned against something (road bikes have no kick stands), but by the last couple of stops they were just thrown on the ground any old way.

On Sunday we watched some of the criterium racing, then headed for home. Halfway there we ran out of gas and literally drifted into a gas station on the fumes. That was the last of the Dallas Curse for this trip: Messed up bike, lost phone, missed ride and nearly ran out of gas.