Lost and Found on the Cape

I didn't have to be at work until later in the afternoon, so I decided to take the long way home, or at least the slow way home. The Optimist Cafe is on 6A, the Old King's Highway. 6A goes along the whole northern edge of the Cape, and is the way to go if you want to see antique shops, homes, beaches, and interesting views.  With a little extra time to spare it's a much nicer drive than the newer Route 6 (the only highway on the Cape) from which you see miles and miles of trees and only trees. I thought that I might look around and see if there were restaurants and shops I wanted to visit at a later time with Shana. I also thought I might stop at Parnassus Book Service, a treasure trove of used books and one of my favorite places to browse.


Anyone who knows my legendary sense of direction will know what happened next. I was out in Brewster before I twigged to what would have been obvious to anyone else. I was going the wrong way. In my defense, 6A can be a bit like a p*rn movie - it looks the same backwards and forwards; every mile is peppered with antique stores, historic homes, and gorgeous marsh views. There is no excuse, however, for thinking the marsh was on the opposite side of the road from where I thought it would be and to keep driving in that direction. In a way driving on the Cape is like driving in Colorado - the sea and marshes are pretty obvious markers if you know whether you are on the north or south side of the Cape. No harm done - I had plenty of time to drive back after stopping at really nice store (Lemon Tree Pottery - I'll be back, and Soon) and an unfamiliar beach and harbor. The Sea Street Beach looks like it is probably residents only, so I'm glad I got a peek off season when everyone has access. I did make a quick stop at Parnassus, too. I thought I might stop at Titcomb's Book Store while I was out, but it's probably just as well! All in all a treat. I can't wait to revisit my discoveries with Shana. 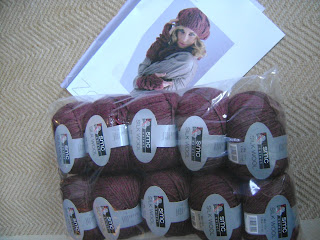 This has been my lucky year for drawings. This time I won some beautiful yarn and a pattern booklet which I think came from Vogue Knitting. I won enough silk and wool blend yarn to make a cabled hat, arm warmers, and cowl in a beautiful rose color. I was not sure which drawing I had won and the suspense was fun waiting to see what would arrive.

Posted by Cinderellen at 1:21 PM

What a lovely adventure!!!!!

yippie! From what can be seen of the pattern, it is very pretty!

Merry Christmas Ellen. And a Happy New Year to you and Shana. May it be a wonderful year.