A Weekend with no Football 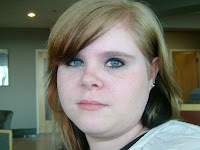 Friday afternoon Samantha and I went down to the OU Health Sciences center for a test to clarify results of an abnormal pap smear. She was nervous about the procedure, and of course her dad had jumped to the worst possible conclusion and scared her to death. As it happens, OU is partnering with a German firm to test a new tool that combines digital photography with colposcopy that allows them to get an even better look at the cervix. While I was pleased to know that Samantha was getting the best medical technology has to offer, the fact that this is new technology meant that in the little tiny room where the procedure was taking place was filled with about eight people (plus Sam and me!). Three people got to use the machinery and try their hand at focusing and taking pictures, and the company reps made helpful suggestions. The end result was that I think she got a very thorough examination and we both got a very good look at her cervix, enlarged and (basically) on TV. We got to ask lots of questions about the procedure and get lots of answers. In spite of being in a small room with no pants in front of a crowd of people, I think Samantha was fairly comfortable because of their attitude. It looks like nothing to worry about, which is the result we were hoping for.
Partly because they were running every test with a full cast of characters, and partly because of the way clinics always seem to run, we went in for a 1:30 appointment and didn't leave there until after 3:30. We had plenty of time to visit, and had quite a pleasant time together. 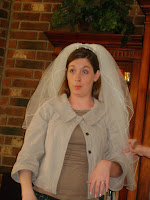 Saturday Shana and I attended a bridal shower for Katie, which was a nice little party. The guest list was small: the bride, her mother, Shana and I, Aunt Rita, and Nancy's best friends. Money gifts were given after lunch; then we adjourned to the living room for cake, coffee, and presents. Except for some honeymoon treats (of a non-embarrassing nature) the gifts were sentimental and sweet. Nancy had an artist's sketch of Katie's wedding gown enlarged and framed, the ring bearer's pillow that I made for her was one of the gifts. The last gift was her wedding veil. Katie is wearing her mother's wedding veil, beautifully remade for her by her Aunt Jeanie. Katie was surprised and touched - tears all around.
I had planned for an afternoon visit with Vivian, but due to some scheduling conflicts we were not able to have our visit. Instead Shana and I went out looking for outfits for Katie's wedding, which will also serve for our own wedding. We both met with success, and snatched up our choices. There will be a little tailoring for Shana's choice, and we will both need shoes, but the major decisions are made. We'd been a little anxious about it, so it was good to have that out of the way. For the imperfect, shopping for special occasion clothes is fraught with anxiety. It can be hard to maintain your self esteem in the face of clothes that do not fit, are unflattering, or do not come in your size. It's funny how after you try on things for a while you begin to think that it's not the clothes that don't fit or are unattractive, but yourself. You want something nice, but do not want to drop a pile of money on something that may not be wearable in future. I was concerned that not only would I have trouble finding something that fit well and would be appropriate for both occasions, but would also suit a shawl already in progress, so to everything else I added color requirements. Shana had initially been thinking of a dress, but ultimately selected a suit with pants that will not only be dressy enough for the two scheduled occasions, but also would be suitable for work meetings. She has a position on a company wide committee, and will be happy to have a nice outfit to wear when meeting with the company president. Her normal work wear has to be suitable for sitting on the floor with children, so dressy clothes are a very small part of her wardrobe. The prospective shoe shopping holds no fear for me - what could be more fun than picking out shoes to complement a beautiful dress? There is also the issue of a suitable handbag. I may have something already in my arsenal, but who could say no to a cute new clutch? 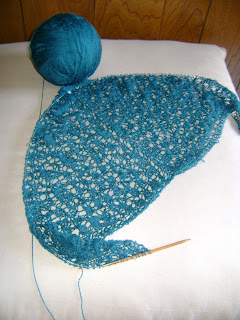 After the shopping trip I adjourned to my craft room to work on the Peacock Feathers Shawl. I've started on chart 3, row 87 of 250. That sounds like I am nearly halfway done, but that is only an illusion. The shawl gets wider with every row, and for every row of the chart there are two rows of knitting because you purl back after every row of the chart. I'm a slow but persistent lace knitter. How people can memorize a chart and buzz right along is a mystery to me. I've got post-it notes with stitch numbers laid over every line, and I still have to count my stitches going both ways for every repeat. Also, once the knitting is done there is a looped crochet bind off that will take a fair amount of time. Luckily crochet holds no terror for me. The Yarn Harlot has said that lace in progress looks like a**, and in this she is certainly right. I have now arrived at the point where I will no longer be able to stretch the shawl out to get a peek at the pattern without risking dropping part of it off the needles. Except for its ever-growing size it will look exactly like the yarn barf you sometimes get when trying to find the leading end of a center pull ball until it's off the needles and blocked. This is the leap of faith that is lace knitting. Oddly, even though it looks awful, getting to this point gives me confidence that I will be able to finish it.
Posted by Unknown at 10:29 AM