Warm up the House With Football 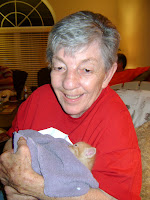 Diane and Sharon broke in their new house last night by hosting the WAACOs for football. It would have been hard to go wrong with a Mexican themed menu, a winning football team, cake for those celebrating September birthdays, good company, and kittie cuteness.


The Sooner look good so far, although I'm ready to see them play a better quality opponent to see how they do against a team with a little more speed. On the other hand, I was terribly disappointed in Ohio State. USC is a mighty opponent, but I really thought they would do better. They looked awful, and I expect this weekend's results will shake up the rankings. 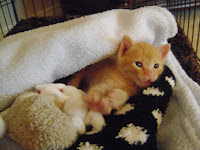 Little Simba is growing like crazy and showing off his big cat instincts. He's just beginning to master walking, and is already pouncing and chasing anything that moves away from him. It's surprising to see how much complex animal behavior is hard-wired. He's still the cutest thing ever - even more so now that he's becoming so lively. He's still bottle fed, and his best friend is still a sock. He's all the way up to 13 ounces from the 6 ounces he was when he came to his new home. No wonder he looks visibly bigger every time I see him. 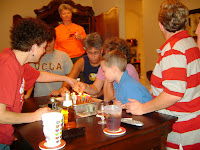 Everyone brought Mexican treats for potluck and did we ever have a feast! It was topped off by birthday cake for all the Virgos, and in spite of the plates of yummy treats we all had I don't think there was a single crumb of cake left. Testament to the excellence of Dianne's baking, and the universal appeal of chocolate.