Fish Heads on a Stick 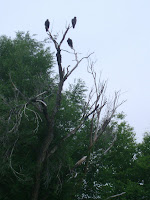 Today I rode in the Oklahoma Bicycle Society Streak. I only planned a 25 mile ride today because I am still recovering from my crash two weeks ago. Almost all of my road rash is healed, and most of my bruises, but I must (reluctantly) concede that my right thumb is broken. It's not as much of an impediment to cycling as it is to yoga, but it does make most riding hand positions uncomfortable and I don't enjoy the ouchies so much. This year I rode with Kim & Susi, with Ruby & Dianne catching up with us later. It was a lovely cool morning, overcast until nearly noon. We had a lovely ride, dawdling along and visiting. 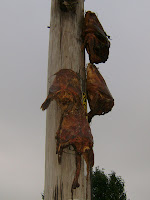 As always, I brought my camera along in case I might see something interesting. As always, I did. First I saw a tree full of Turkey Vultures. They wait until the day heats up a bit before they take off, so they were still roosting when we rode by at 7:30 in the morning. Later in the day I saw them circling over a recently ploughed field.

Farther down the road I saw a country artifact: a bunch of dried up catfish heads nailed to a pole. It's an odd sight, and one I've seen several times when out riding in the country. The first time I saw the traditional display of fish heads they were hanging on a series of fence posts and I thought maybe they 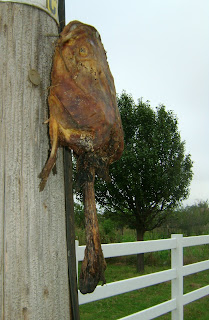 were cattle skulls hung out to dry and be cleaned by wild scavengers to prepare them for sale. Closer examination revealed them to be fish heads. I have no idea why people do this, but they are pretty common. I have read that they are hung up to dry so they can be used as fertilizer, but the fact that they are always hung close to the road tends to argue for their trophy value: Behold the Mighty Noodler! The large size of these fish heads (probably from 40 or 50 pound fish) makes it seem likely that they were caught by hand - noodled. This is a very popular sport in Oklahoma, and displaying the results of your efforts on a pole or fence in front of your house apparently seems like a good idea. Personally I think they are gruesome (not too gruesome to show you some pictures!), but I don't think I could be persuaded to take up the sport. It's bad enough to blindly stick you arm into a hole under water and hope there's a nice big fish you can get to grab you so you can pull it out by the by the mouth. The fact that other creatures do take over those holes and you could just as well be reaching for a beaver or a snapping turtle instead is just horrifying. 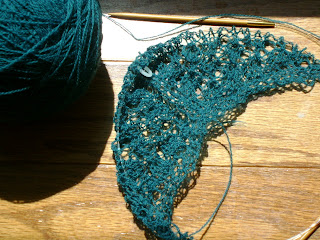 I'm currently on the second knitting of the first 50 rows of the Peacock Feather Shawl. I had faked and fudged a bunch on the first few rows and was willing to let it pass because the first few rows don't really show, but when I got to chart 1A and started on the wrong row I had my stitch count seriously off and no matter how hard I tried to rationalize extreme fudging there really was no help for it. My yarn tangled while frogging because although it's not really fuzzy it's kind of sticky and very fine, maybe somewhere between cobweb and lace weight. After half an hour of trying to untangle it I ended up just cutting the yarn because I have about 300 more yards than I need to complete the shawl. Of course I am hanging on to the cut off bit in case I desperately need a tiny bit more yarn, in which case I will have to revisit the untangling. In this picture the color is very true - at least on my browser, but of course, being lace in its unblocked state, it doesn't look like much yet.
Posted by Unknown at 1:32 PM