Stretching out the Holiday Fun 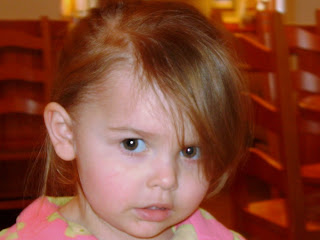 Christmas Eve Oklahoma City was hit by a day long blizzard, ending up with a record snowfall. I met up with the kids, their dad, and Miss Vivian for lunch instead of our usual dinner because Samantha was scheduled to work that evening. By the time they arrived at the restaurant the roads were going downhill fast and sensible people were headed home. As soon as our orders were filled the kitchen closed and the restaurant closed behind us. I got home without incident (except for my hair standing on end), but all of the interstates closed and it took everyone else three hours to get home. To those who long for the 'White Christmas" of song I say Bah Humbug. I've had many in my life, and they nearly always suck. It's lovely to be snowed in but just awful if you need to get out. 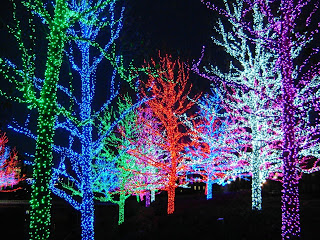 Shana and I had planned to have Christmas dinner with friends and go to a movie after calling on various family members, but with 14 inches of drifting snow on the ground we rescheduled our dinner for Saturday night and spent Christmas Day snugged up at home. I had a big bowl of chicken soup for my Christmas Dinner and went to bed early. Just as well, as my cold bloomed into a full on snot fest that I would not have liked to share with everyone.
Saturday night we had our festive dinner with friends and slid on out to see Sherlock Holmes which we we all thoroughly enjoyed. I'm hoping to get out today to deliver my cookies so I don't eat up a lifetime supply all by myself. Tomorrow I'll be back at the coal mine, but today I hope to spend mainly knitting, reading, and watching movies at home.
Posted by Unknown at 1:33 PM 2 comments:

This weekend we've "enjoyed" some (very) minor drama. Friday we were blessed with such a beautiful day that I took Roxy and Skippy to the dog park. They had been so bored hanging around the house in the recent cold weather that they were getting into every possible kind of mischief. Roxy was so desperate for entertainment that she actually ran and played with other 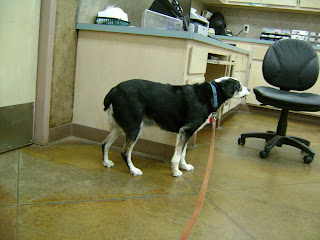 dogs, which she rarely does. Skippy has not felt like playing fetch for some time but Friday he wanted to, so I threw the ball for him. Unfortunately amid all of the running and leaping he landed awkwardly on his tired old ankles and hurt his right foreleg. By Saturday morning he was no better, and the leg was noticeably swollen. Off the the vet, and $200.00 later we were back home with doggy NSAIDS and orders of rest. Poor old guy! At least we are certain the ankle is not broken, which I thought it might be.
Shana came down with a cold Friday which has since turned into laryngitis. This did not bode 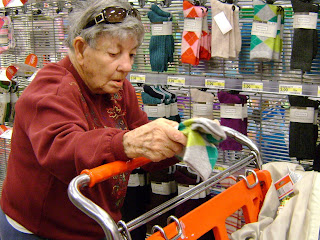 well for the yearly ceremonial opening of Rita's wallet. Luckily Rita can read lips well, because she could not hear Shana's whispering at all. (Rita also thought the laryngitis might be a permanent condition) I went along for the shopping trip to translate and laugh. By the time we were ready to leave Target Shana was worn out and Rita had had as much stimulation as she could stand.
After the shopping expedition I helped Aunt Rita with her annual quick bread. This year we made pumpkin bread. One of the ladies Shana works with shared an excellent recipe which Shana had already tested earlier this season, so we put it to use again. I think that is the last of 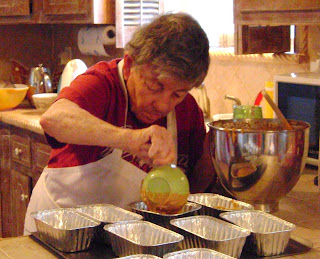 the baking for this year except for Shana's office gift cookies which she will make herself. Although I like to bake for the holidays by the time I am finished I have well and truly lost interest in the process. Still, the gift trays will be pretty, and once I have them made up I know I'll be happy I made them up.
I finished my shopping early Friday afternoon when I was waiting with Samantha for her car to be repaired. I am now down to one simple grocery store item and I can sit back and enjoy the fun. It doesn't hurt a bit that I leave work early on Wednesday and don't go back to work until Monday.
Posted by Unknown at 4:46 PM 1 comment: 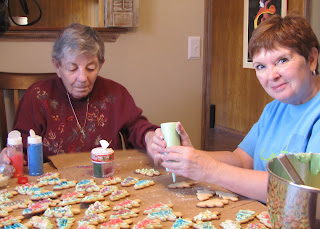 This weekend I performed my annual marathon cookie bake. Friday I went to Hobby Lobby for my cookie plates and to my favorite grocery for the rest of my supplies. Buy For Less happens to be a locally owned chain, which is a big plus for me. The fact that the deli and produce departments are outstanding doesn't hurt. Because it is locally owned the various stores can have a slightly different inventory to suit the customer base (one of them has an excellent Mexican bakery). I found everything I needed there. Of course that was no big problem because most of my Christmas baking requires pretty ordinary ingredients. The list of treats: Brown Irish Soda Bread, Sugar Cookies (which Aunt Rita helped me decorate), Almond Spritz cookies, Paula Deen's White Chocolate Chunkies (subbed cranberries for candied cherries), 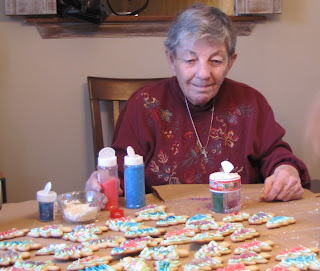 Cranberry Pecan Pinwheels, Walnut and Black Pepper Biscotti, Saltine Toffee, Haystacks, and Aunt Bill's Brown Candy (Shana pitched in and did half of the 10 minutes of vigorous stirring it needs). I did everything but decorate the sugar cookies in one day and moved everything out to the freezer as soon as it cooled. I have a freezer full of treats in my garage all ready to make up gift trays and bags. Making everything in one day is hard work, but doing it that way I can just leave all of the supplies out from the time I bring them home from the store until I have finished making everything and only have to clean up after baking once. This is an obvious benefit to those who have ever seen the kitchen after I finish with it. Many years ago my nephew Kyle used to help me. In more recent years Aunt Rita has worked with me, but she's not up for the long day anymore and really would rather just decorate cookies. This year streamlined the decorating by making all of the cookies in one shape - trees. I just piped green icing on them and Aunt Rita sprinkled them from our large selection of sprinkles. It went quickly and with very little mess.
Posted by Unknown at 4:49 PM No comments: