Untitled Weekend (too lazy to title) 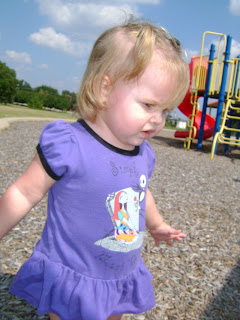 Friday afternoon I had a visit from Miss Vivian. As she's grown she just keeps getting busier and busier. We went to Target to score some sparkly pink shoes, then off to the park. The swing was a big hit, but stepping on and off rocks was endlessly absorbing. She's finally gotten past the stage of picking up everything no matter how unlikely and putting it in her mouth, which makes outdoor activities much more pleasant. She is, however, getting to the phase where she does not like to be swept up and carried wherever you want her to go. She'd rather head off in her own direction as fast as possible, but will (just) consent to have you lead her by the hand.

Back to the house we went for an afternoon of go go go. She mauled the dog, played with her toys, checked (and double checked) all the doors in the house to be sure she was still barred from total access. We had a rhythm band parade and danced. She talked on the phone, climbed in and out (and in and out) of chairs, 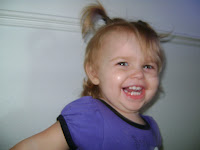 attempted to mutilate my house plants but was prevented by doing so because my big ponytail palm can defend itself with rough edged leaves, checked several times to be sure I still did not want her pulling everything out of my kitchen cupboards, and enjoyed a snack. She won Roxy's heart when she shared her teddy grahams. We had dinner. She had a bath. The only thing she never did was stop moving.

I took lots and lots of pictures, so hop on over to my Flickr gallery to see the rest. 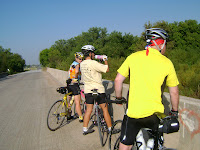 Saturday morning I joined some of the cycling group to ride out to El Reno. It was a perfect day, and we made an easy ride of it. It's probably a sign of our progress as cyclists that a forty mile ride appeals as an "easy" morning on the bike. Five of us rode out, and whenever we regrouped the conversational groups were shuffled. I think everybody got a chance to visit on the road. I was especially thrilled to find out that Melissa has actually raised sheep and GOATS! The only thing that marred our ride was a very new chip surface on about 8 miles of road. There was a huge amount of 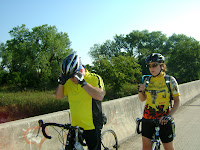 loose gravel on the surface, so we had to slow down and pay close attention. I like to think it's a great opportunity to build our skills to run into things like this, but I really think one mile instead of 8 would have been sufficient for that purpose. We're really past the season for rigorous training now, so we were just out enjoying the day and could take our time to look around. We're determined not to lose all of our hard won endurance over the winter, but the need to keep up a particular pace has faded a bit. We stopped often to regroup and enjoy the scenery and quiet of the country, including snake s 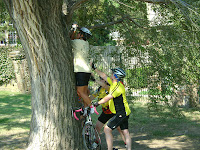 potting off of a bridge. That made a nice change, as most of the wildlife we saw was in the form of roadkill. I don't know when I've ever seen so many and of so many species. On the way out Diane and I noticed a little cat up in a tree. When the cat was still there (and looking unhappy) on the way back. Diane decided he (she?) needed to be rescued. Diane used her bike as an improvised ladder and saved the day. Then we adjourned to Jim's for a bite and some additional conversation before we went our separate ways.