It's a Family Tradition 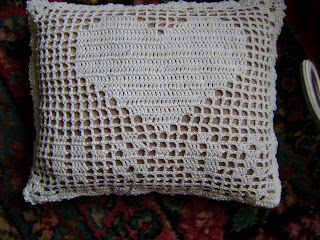 This weekend I have several deadline projects in the queue, so it's nose to the grindstone time. I've finished the Ring bearer's Pillow, which I had put off until the last possible instant because I thought that the fine crochet with mercerized cotton would hurt my hands (which it did). Next up on the schedule should be a baby blanket due at the end of October, and then the shawl for my wedding. I will probably just cast on for a pair of socks today, because the worsted weight yarn hurts my sore thumb. The shawl doesn't hurt anything, but takes concentration and with Rita and football around concentration will be hard to come by. 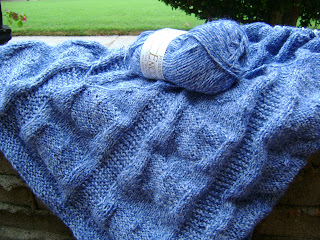 Working on the little pillow, I was reminded of my maternal grandmother. she was super crafty. She could do any kind of needlework you can name. She did petit point, beautiful crocheted lace, quilting, cross stitch, and sewing. She always had some kind of work in progress. She gardened, including putting canning and making jam. The only thing I never saw her do was knit. She had learned to knit and spin in Ireland as a child. Knitting argyle socks for money turned her off knitting for the rest of her life. When my mother wanted to knit she had to teach herself. Even when I was a little girl when I took my handwork to her she would always look at the back first, to see if I was doing it perfectly so that the back looked as good as the front. When I was making the pillow this morning I could almost hear her in my head advising me that threading my needle with a really long thread so that I would not have to thread it twice and make two knots was sloppy and would take more time because I'd have knots all over.

Probably because she was such an avid needlewoman, my mother grew up a crafter. We were short of cash, so if we wanted something we first thought up ways to make it ourselves, with extra points if it could be made from something we already had around. Mom taught me to crochet, embroider, sew, and knit. Every Christmas we baked, and also had some other kind of seasonal project, like candles or kissing balls. We made clothing and slipcovers. As I got older I still played with my dolls - it was fun to make clothes and accessories for them. Because Mom was crafty I always had lots of scraps around the house to spark my imagination. I still keep a pretty varied crafts stash, and still love to make things. Thanks Mom!
Posted by Unknown at 11:57 AM

Thanks for sharing the sweet memories of your craft loving grandmother and mother.

Have you ever seen the movie, "Lugnasa"? It's about a family of Irish cottage knitters. It is a memoir of a boy in the family of his mother and aunts. It's a little sad but beautiful, too.