Playing in the Yard 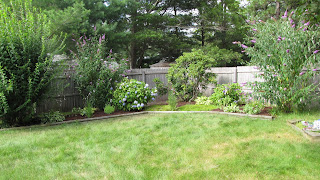 We are not moved into the house yet, although there are signs of progress in the bathroom in the form of shower pan and plumbing changes. I am going over almost every day to pick up the mail, check for progress, and play in the yard. 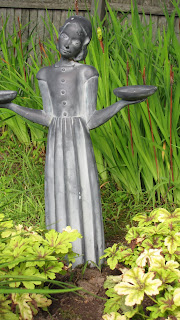 So far I've got the front beds pretty much the way I want, the shady bed (with one sunnyish end) is probably near its final condition. It still needs weeding, mulching, and probably a couple of ferns but is otherwise just about done. Today I worked on the sunny corner bed. It needed major weeding - I cheated by laying down newspaper and mulch. It was also a little out of balance because this is the one Irene took some things from when she moved. There were a few plants I moved out to another bed and I added "The Fairy" between a large purple hydrangea and a mature butterfly bush (probably Black Knight, based on the size of the shrub). I added Montauk Daisies and generally cleaned it up.

I started on my all sun all the time bed with a few day lilies, a bit of yucca and some more Montauk Daisies. I don't expect to get much going on this bed this year, in part because I think I will be planting some seeds in this one and it may be too late in the year to get going. I will have some divisions from my gardening friends to get it going, so my main focus this year will probably be planning and soil amendment. It's pretty dry and sandy without much nutritional value. 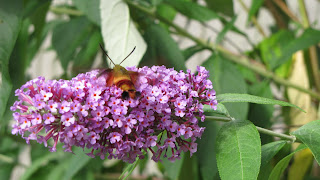 One thing I saw in the garden today that really caught my eye: a hummingbird moth! I'm guessing a snowberry clearwing moth from its appearance. It's quite large in the body, but with smallish wings and looks like a hummingbird in flight. We had some in Oklahoma, but I've never seen this species before. Very interesting.

To get a closer look you can click on the pictures to enlarge.
Posted by Unknown at 7:42 PM

Your gardens look so serene. Ahhh.