A Little More July in the Garden 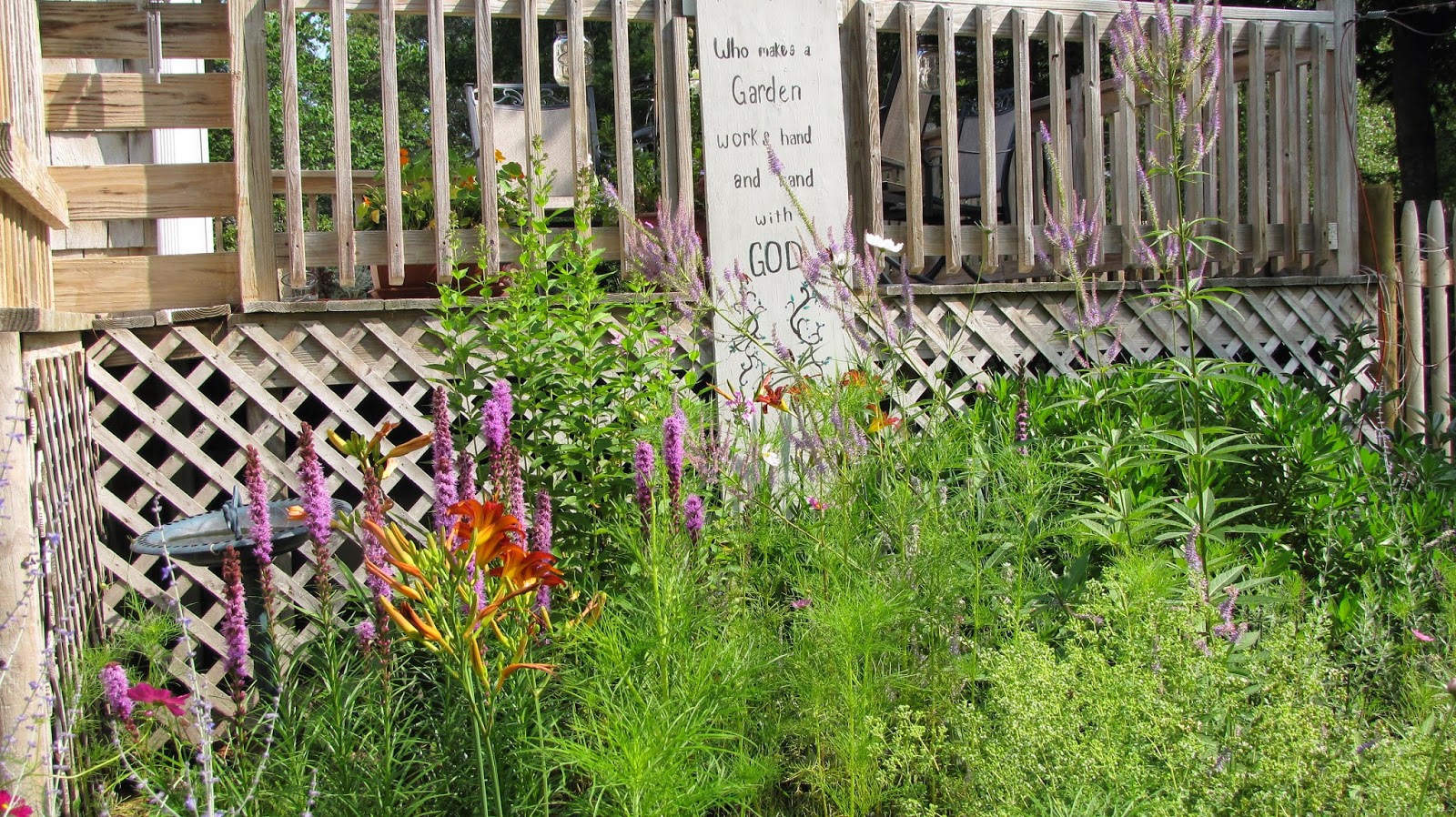 Even though the Very Long Terrible Horrible winter is long past the effects are still being felt in my garden. Some ordinarily very hardy plants succumbed to too long periods of intense cold and some expired from too much dampness due to prolonged snow cover in the already moister parts of the garden. Others liked the conditions and flourished. 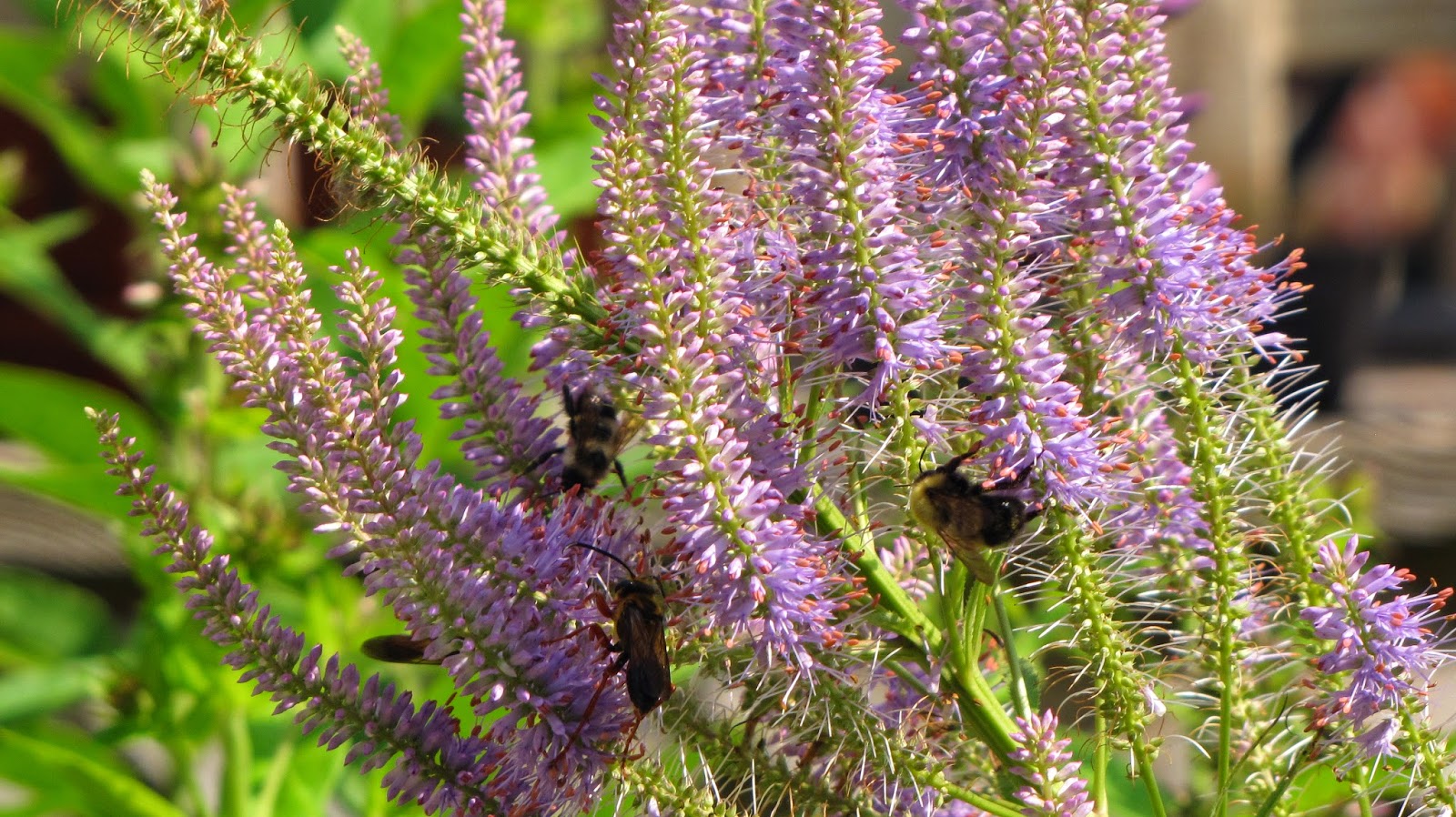 The Nepenta I took from my mother in law's garden attempted to take over the earth this year because the limiting Gaura and four o' clocks left the area. The Gaura expired and the four o' clocks died out where they were last year but came up from seed somewhere else (to be carefully watched for dominating behavior).  A little more moisture over the winter was welcomed by my dwarf Monarda, which is twice as tall as last year, although still withing dwarf range. The hosta blooms I ordinarily care little for are luxuriant and beautiful this year. My Japanese Painted Fern has decided to shoot up to knee high. Many of my hydrangeas may not bloom this year, although none have died outright. 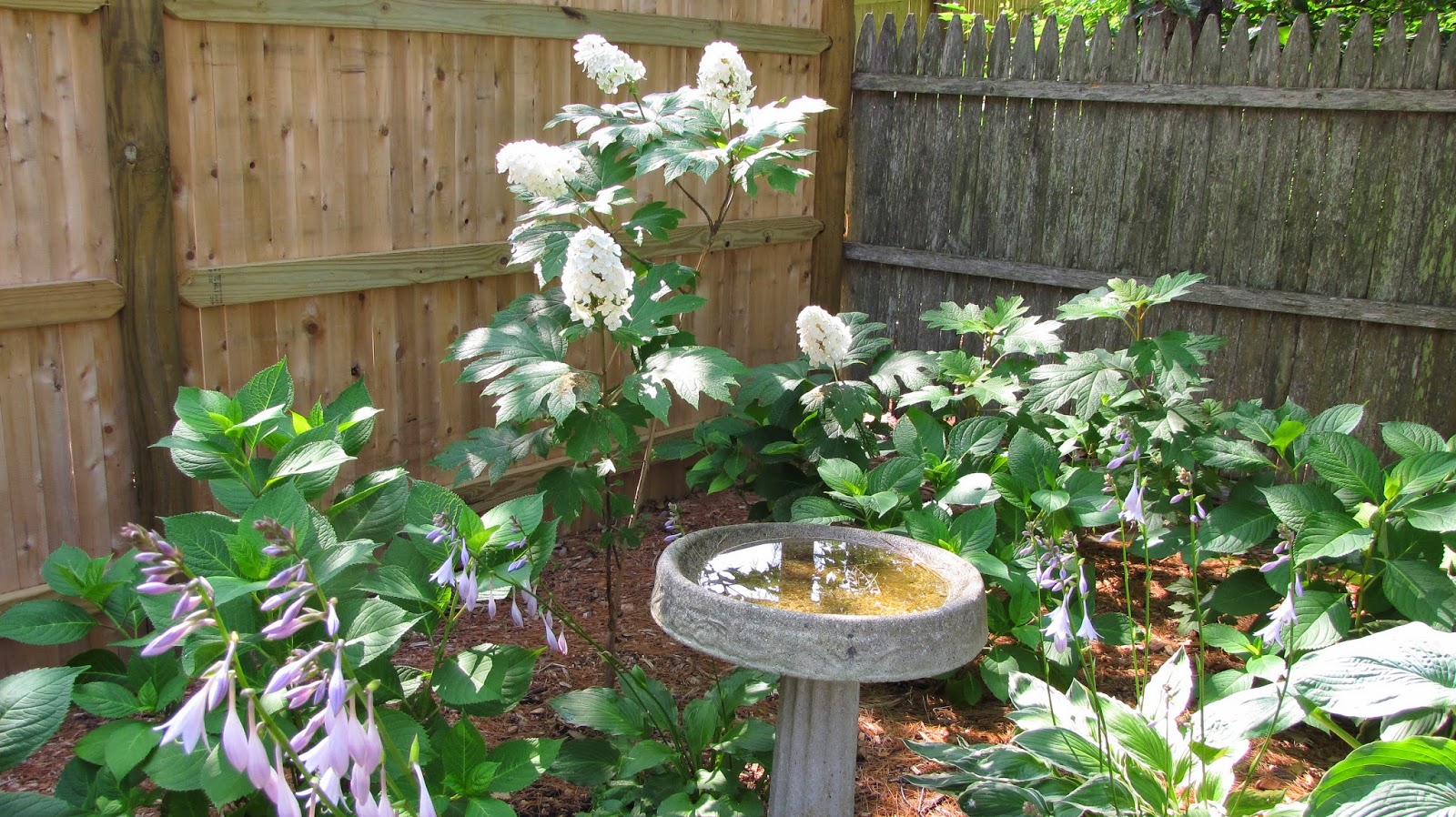 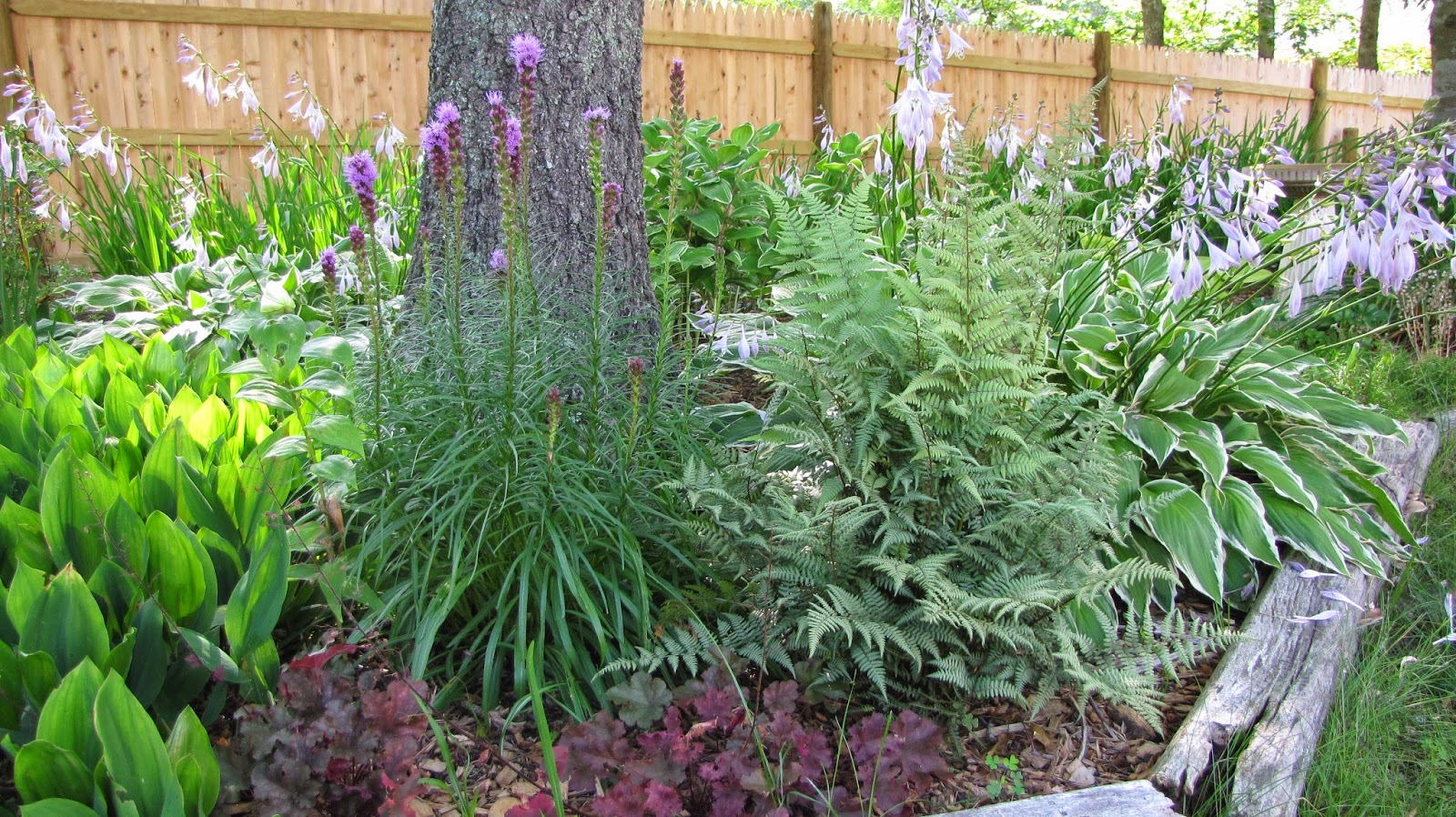 My tall veronica is not only still over six feet tall but also has very full  and beautiful blooms. The plant has not only attracted masses of bees this year but unaccountable numbers of gigantic wasps. Kind of horrible. One thing I am thinking about this plant is that it is not veronica, although it was sold with that identification. I think it is Culvers Root (Veronicastum virginicum) and the other plant I have in my garden also sold as Veronica is truly Veronica (Veronica) also known as Speedwell. Close examination of images on Google would argue that one was incorrectly identified. No complaints, as I like both plants, but just as a point or correct identification, and a reminder of why Latin names are so important. That would explain why it is so gigantic compared to every other Veronica I own. 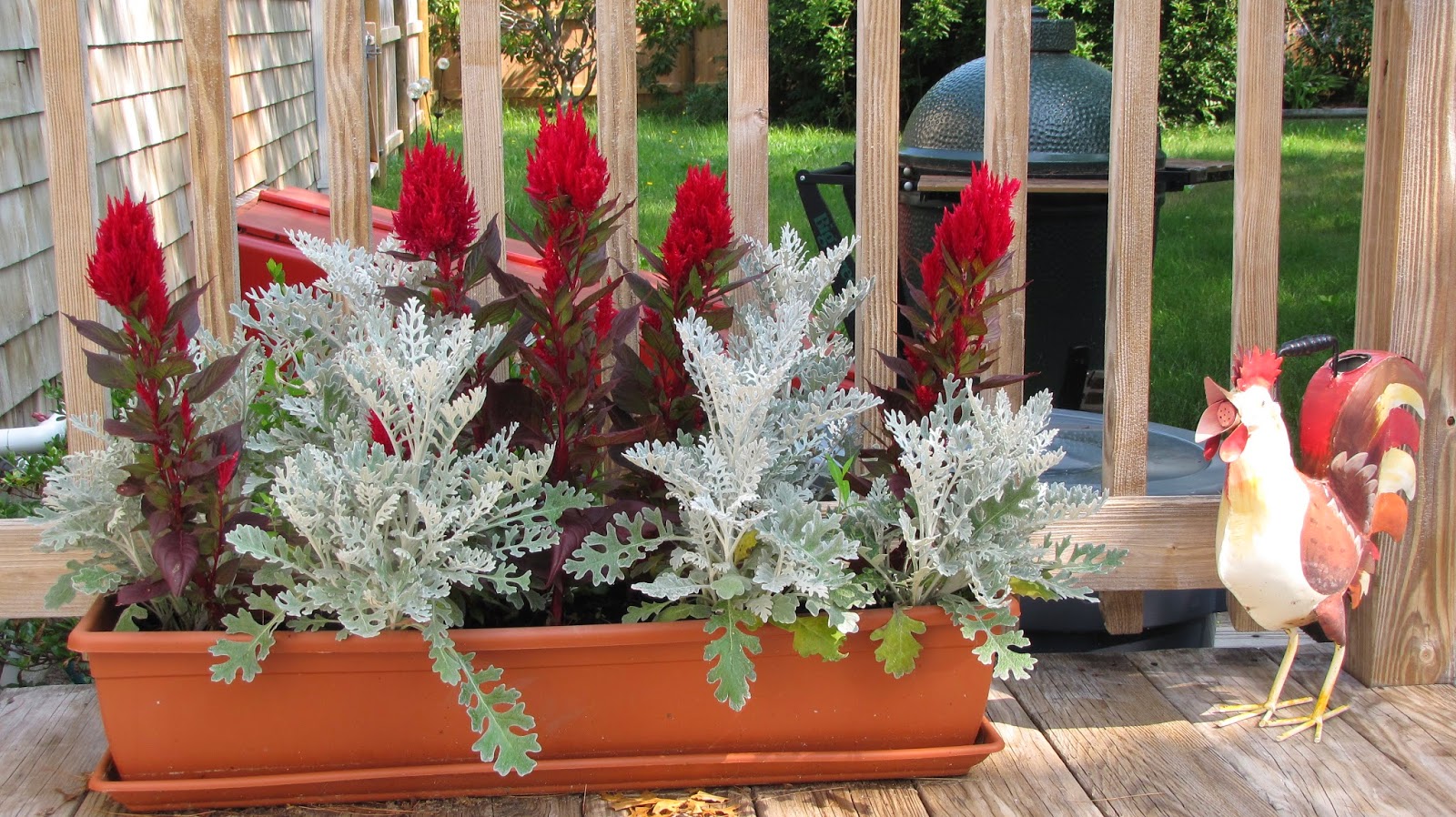 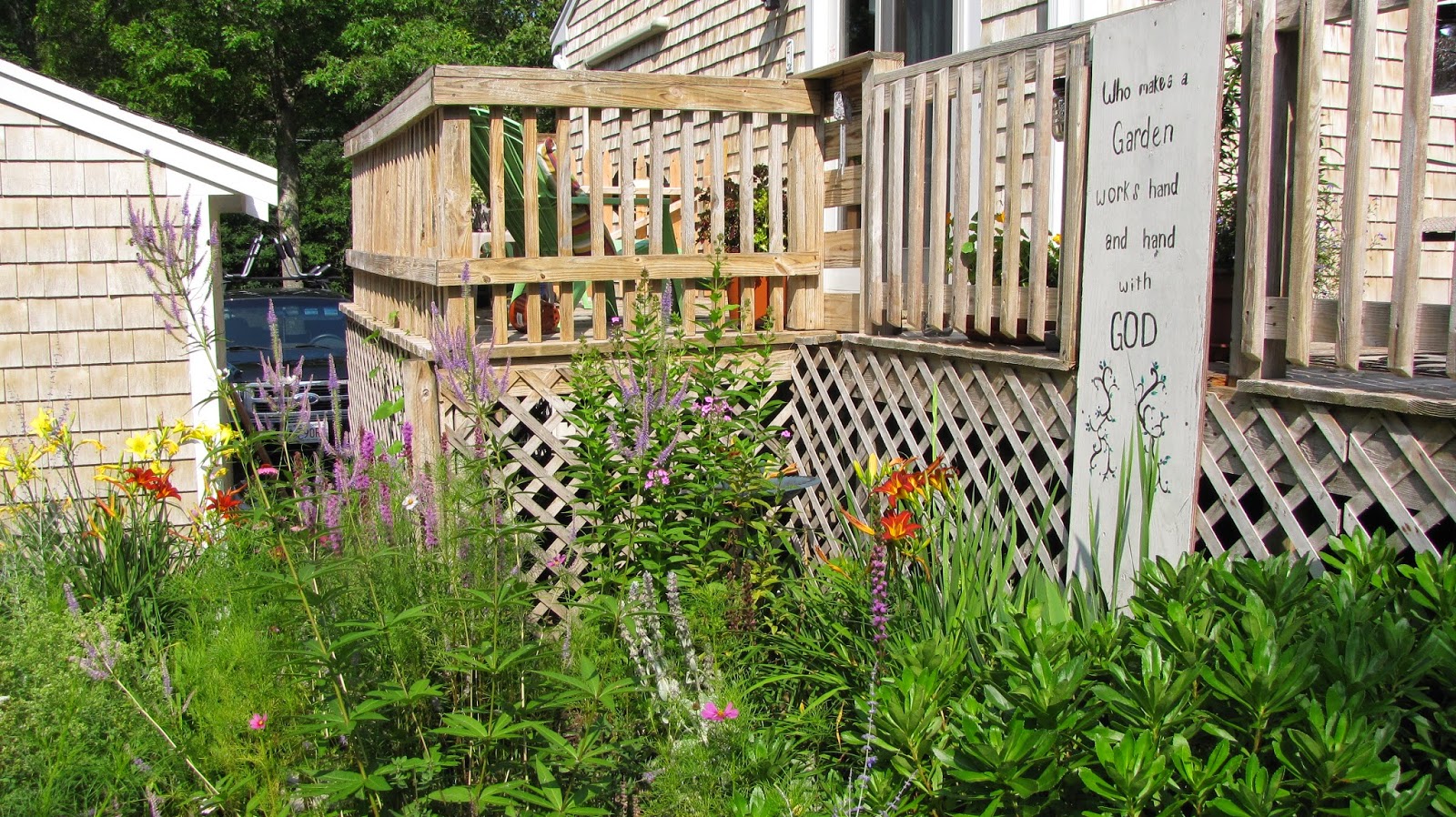 One thing that I found this year if that it seems that my plants are blooming slightly out of sequence. Part of that could be conditions in my particular garden where my blooms are arriving before or after those in other gardens I have seen. Part of it is just plain puzzling. My Phlox is just now coming into bloom although the Liatris has been in bloom for some time. Nothing shocking, exactly, but just a tiny bit out of whack. I suspect it is a combination of things. For plants that depend on temperature as a trigger Climate Change may be the culprit, whereas plants that depend on hours of daylight would not be as effected by warmer temperatures than expected. Plants that found the winter exceptionally stressful may have bloomed early as a result. In the case of my hydrangeas I may be getting late or no blooms because the flower buds on the old growth may have been killed leaving only new growth blooms which would be expected to be later.
Posted by Unknown at 10:52 AM

Your discussion of your garden is fascinating. I have no knowledge or skill for growing plants,and I'm impatient for things to grow and bloom. Consequently, my front garden is a random assortment of plants from various years that have survived only because they are the kinds of things that grow on the side of highways. I only plant perennials and only about 20% make it to another year. Since I never knew what I planted in previous years I fill in with random new plants. In addition, I have no artistic ability so they are not nicely clustered or arranged, they are just planted. This year I finally seemed to have enough plants that had survived and bloomed that I had lots of hope that next year would be the year that it would all come together in some random, natural looking garden. Then we needed a new sewer pipe installed and I had to rip everything out. I tried to put them in pots temporarily but we've had 95 degree days and they are so wilted I imagine most will die when I replant. I'm back to starting over.