The Things You See by the Side of the Road 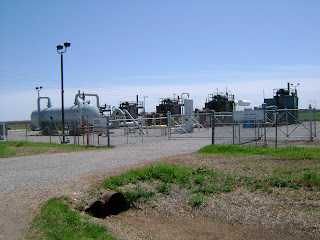 We've been lucky enough to have some unseasonably warm weather here in Central Oklahoma. I've been taking advantage of the warm days to get in some cycling. The first organized ride of the season that we usually do is next weekend and I plan to ride about 30 hilly miles. There were two problems with this plan. #1 - I had not ridden any hills since last fall and #2 - I had not ridden any distance since last fall. The recent warm weather let me correct both of those deficiencies.
I got out Wednesday night for eighteen miles of hills. I was building up a dread of hills and wind that I needed to get over, and that did the trick. It was as rough as I remembered, but not as bad as I feared. Next week I will have some company on Wednesday night, and I will not be (too) embarrassed since I'm over the worst of it. I'm not strong enough to enjoy it, but I won't stink too bad.
Yesterday I rode out to El Reno for what I though would be a reasonable 40 mile ride. I rode out with a couple and we visited and talked all the 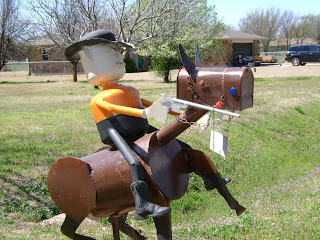 way out about how nice the weather was and how nice it was to be out for a ride. Alan was chased for about fifty yards by a pair of aggressive chihuahuas. I wanted to get a picture of them but he was accelerating and I was trying not to fall off the bike laughing so I did not get my camera out in time.
On the way back I took a couple of pictures - The Best Mailbox Ever, and a natural gas compression facility. The mailbox is the cutest thing going. The body and head are LP gas cylinders. The natural gas station is one of those things that is not uncommon around here, but I wanted to get a picture of it anyway. I've got a move to Massachusetts planned for October and I want to get some pictures of the things that are ordinary here but which I will seldom see once I move away from the state.
The rest of the trip back was "challenging". We fought the wind all the way, and my seat had become inexplicably loose, trying to slide me off the back several times. The stops I made to address my seat issue were welcome ones. By the time we got back to our cars we were exhausted. Pancakes can cure that.
Posted by Unknown at 7:47 PM