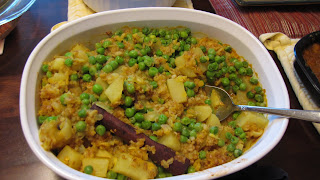 Although the weather is fine this weekend I've elected to stay inside to avoid the burgeoning Indian Paintbrush bloom. It's a beautiful and robust plant (and the State Flower of Wyoming) but is my persistent nemesis. Due to the El Nino rains and the cold and long lasting winter the tree pollen season is worse than usual and I have decided that as in many things, discretion is the better part of valor. I'm staying in and avoiding a sinus episode. I'm driving to Denver later in the week and I do not want to be sick and puny for my trip. 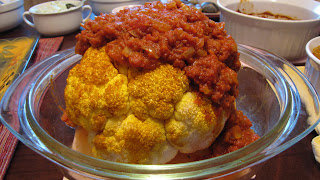 I took advantage of the indoor time to hit my cycling aches and pains with some big doses of ibuprofen and stretching, but some adventure was needed. I seldom cook these days, but I decided to play around in the kitchen for a change.
I had been having a craving for Indian food, probably because my trip to Denver always involves a chicken curry and I've been thinking about the menu. I seldom cook any Indian dishes because it takes a little more effort and time. but with a day to spare and a craving for the results I dove right in. 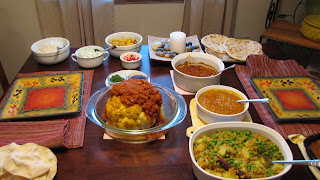 First part of the preparation was the trip to the Indian market. I went in with a only partial plan.
I wanted some pappadums and nan, and a couple of relishes, maybe a different bean to try. I ended up with a beautiful cauliflower and a frozen chickpea dish to try alongside my own offerings. I ended up with a baked whole cauliflower with a spicy hot tomato sauce, an Indian brown bean curry, spicy lentil dal, and a stew of bulgar wheat with lentils and potatoes. We had nan and pappadums with two dipping sauces, a flat bread studded with potatoes, and some basmati rice cooked with peppercorns and cloves. For cooling side dishes we had cucumbers in mint yogurt and a chaat of mango and pineapple. Everything looked beautiful satisfied my cravings. Oddly, Shana had been craving spicy Indian food too. I had tried some new recipes, improvising a bit according to what I had in the kitchen and the amount of food I wanted to make. The meal was vegan except for the yogurt. Although perfectly well balanced in terms of nutrition, Shana is a dedicated meat eater, so something needed to take the place of meat. That something was the cauliflower -a dish with a substantial presence at the table and a vivid flavor. It was easy to make, but took longer than I expected to cook. I suppose the original recipe was not for a cauliflower the size of my head. There are loads of recipes online for baked whole cauliflower, and since we both love it I think we'll be trying a few of them.
Posted by Unknown at 12:02 PM