Back at Sea Level 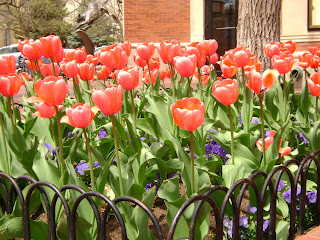 I am back in Oklahoma City after my annual visit to Denver. In April it's a kind of time machine because spring here is ahead of Colorado by a few weeks. There the trees are still in bloom, but I came back to find them in full leaf. By visiting Denver I got to enjoy tulip season again.
Mom and I visited Boulder and the Pearl Street Mall for shopping and lunch, after getting the Tour of Boulder because we got turned around. We visited the irresistible Peppercorn where I wanted one of everything but came home with only a little trifle for Shana. I was not so successful at The Alpaca Connection where the lovely Princess Cape threw itself into my hands. 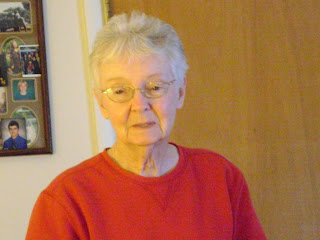 The tulips were in bloom and the weather was perfect. We usually do a little yarn crawling in Boulder, but having indulged in a large piece of hand knit alpaca I passed.
Later in the week we dropped in at Deer Pants in downtown Brighton and admired the new yarns. I admired the alpaca yarn she carries (from Wanda's own herd) but bought some sock yarn instead. I picked up some beautiful blue with sparkles for Mom's Christmas socks, and a pink bamboo blend for myself. The same day we went thrift store shopping with amazing luck. We were in the market for a gate leg table for Rich 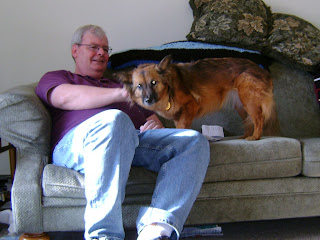 and turned one up right away. Since he's taken up crock pot cooking he really needed more work surface than he had available.
It was a good visit. I was tired and stressed when I arrived, but by the time I left I was rested and felt restored. It's a good thing, too. On the way home I had an accident two hours out from home and was fortunately able to react without panic. I tried to change lanes where another car was already occupying the lane. We both got a (very) little scraped up but no one rolled or lost control and no one was hurt. It was a great outcome because we were in quite a bit of traffic at 70+ mph. Once the police portion of the day was over and I was on my way again I felt a little shaky, but only a little and I was back home before dark.
Posted by Unknown at 4:38 PM

Glad you had all the good memories and a not too serious accident. I've traveled that road several times and it really does get packed at certain time of the day. I'll bet you were happy to finally get all the way home! Glad you're ok.